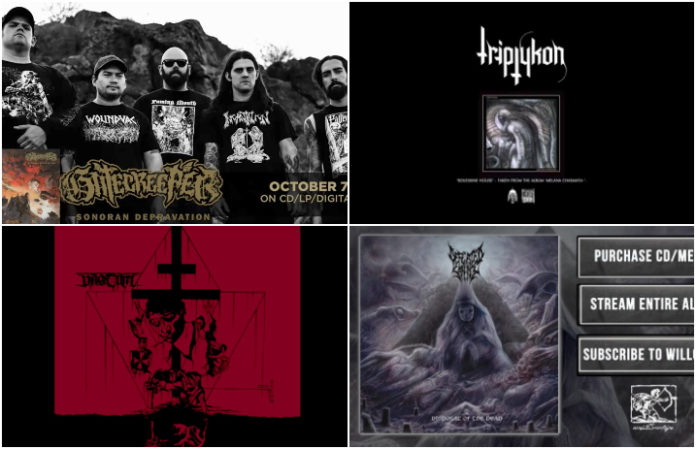 No matter which way you cut it, darkness in some form is at the heart of metal. The opening “devil’s note” of Black Sabbath’s debut album was a good indicator of what metal would be all about, and while the genre has taken many different forms since then, that aspect of danger is what draws people to it. There are bands that are scary, and then there are some that are downright crap-your-pants terrifying. Here are six bands that will scare the shit out of you – in a good way.

This brutal death-metal band from Germany have been providing gruesome sonic flayings for over 20 years and are considered pioneers in the brutal death scene. Taking a cue from bands like Suffocation and Immolation, Defeated Sanity make hideously ugly music that’ll make you feel gloriously filthy after listening to it. Depictions of grotesque torture and brutal murder abound in the guttural burps, which are laid out over a gory canvas of musicianship that’s clearly the work of deranged humans possessed by demons residing in the deepest depths of Hell. In other words, Defeated Sanity are totally fucking metal.

The grunts of Tom G. Warrior are legendary in metal circles. Triptykon is the project the extreme-metal mastermind formed several years after the disbandment of Celtic Frost, and the result is some of the darkest, most despair-ridden sounds ever laid to tape. An ominous tone permeates every single note of their music, creating an atmosphere that is as suffocating as it is forlorn. Their live shows cast an even more hopeless tone: Banners featuring the nightmarish paintings of prolific artist H.R. Giger adorn the stage, while Warrior leads the rest of the band into a black oblivion donning dark shadows smeared beneath his eyes. Monolithic in tone but somber in execution, Triptykon is the embodiment of your worst nightmare—and you’ll love every second of it.

Vastum really will scare the shit out of you, if for no other reason than because of how good they are. Few bands in the scene capture the spirit of old-school death metal so potently, and they write songs that are as grief-ridden as they are catchy. Live, they are a sight to behold and truly one of the best—and most horrifying—live acts around. The growls of Daniel Butler and screeches of Leila Abdul-Rauf are like two tormented souls begging each other to put them out of their misery, while the riffs ooze agony, death and perversion. It’s evil, it’s cathartic, it’s energizing.

When Gatecreeper play live, a thick haze emerges seemingly out of nowhere and a menacing green light silhouettes its members. The band’s sound is rooted in old-school Swedish death metal, but is devoid of all melody and anything that could even be remotely interpreted as “pleasant.” The caveman riffs churned out by Jack Maniacky (Nate Garrett) and Eric Wagner stir up something primitive and feral in the soul. Frontman Chase Mason swaggers around the stage, bellowing chants from the netherworld and raising his hands like a gladiator emerging victorious from a bloody battle. It wouldn't come as much of a surprise if the circle pits that inevitably erupt during a Gatekeeper set are, in fact, a ritualistic conjuring of evil spirits in disguise whose sole purpose is to mosh straight back into the stone age.

The members of Thou may appear to be a bunch of semi-normal dudes, but few bands so accurately convey  the feeling of true agony and despair as this Baton Rouge-based quintet do. An enthralling mixture of sludge, drone and doom metal, the downtrodden sounds this band produce are nothing short of crushing; it’s as if the band have tapped into those parts of the human soul that experience true sorrow and somehow given them form. It’s not a pretty thing to hear, but life isn’t very pretty. Thou exists to remind its listeners of this.

While the rest of the bands on this list are terrifying in their own right, they’re probably not Portal-level terrifying. Few bands have a look that so closely resembles the murky sonic filth they spew forth. Led by a man/alien/thing known simply as the Curator, the members of Portal donned black robes and masks long before Ghost ever did, but they don’t wear them as a gimmick. Simply put, Portal are akin to a swirling, soul-sucking, mind-obliterating black hole that strips the life out of everything it comes into contact with. Take one listen to their music and you’ll hear why. You also won’t be able to resist coming back for more.

Who should be added to this list? Sound off in the comments.