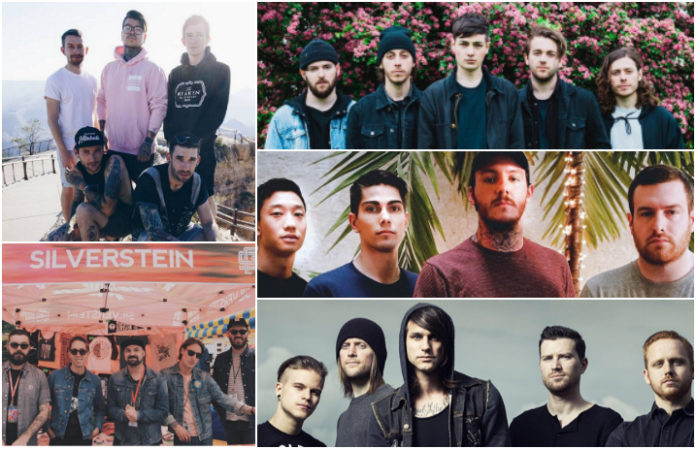 'Tis the season — for the annual Vans Warped Tour to hit a town near you, of course. The beauty of the largest-traveling music festival in the United States is its diversity: The lineup is always a well-balanced blend of veteran bands who use it as an opportunity to go on a very familiar vacation, and fresh, up-and-coming rookies that see this as the perfect networking opportunity to kickstart their careers. We put together a list of our favorite bands to see at this year's Vans Warped Tour.

These SoCal grrlz put the “harm” in harmony and rock so hard, they will pummel you senseless right before slitting your pants under the pockets to get to your wallets and spare change faster. Wise up, suckers; you’ve got no place better to be when Bad Cop/Bad Cop turn up and throw down. —Jason Pettigrew

Originally from Blackpool, U.K., these emo rockers have already toured with your faves in Moose Blood, Like Pacific and Four Year Strong. With a dynamic stage show and a new album of moody, in-your-face tunes, you have no excuse to miss these guys. —Mackenzie Hall

If this is your first year attending Warped, chances are you've never heard of CKY—all the more reason to check them out! Combining elements of metal, skate-punk and a slew of other genres, CKY never fail to give a dangerously wild live performance (watch the various episodes of MTV's Viva La Bam that the group starred in for proof). Look, if you like any of the musical genres that Warped spans and can handle a rowdy pit, CKY will be a staple for your day at Warped 2017. —Anthony Lauletta

William Control logged plenty of Warped road miles during his years fronting punk/metal hellions Aiden. These days, he’s traded the mosh pit for the dance floor, having reinvented himself as an electronics-laden goth-pop bard and bringing his compelling works to create Warped’s first-ever “goth summer.” Pack your SPF 500 sunblock and get back to black. —Jason Pettigrew

With a (semi-) fresh lineup, Counterparts have a new, ramped-up, never-before-seen energy. Rev up those fidget spinners and jam their most recent release, Tragedy Will Find Us, to get ready for some serious pitting for these Warped newbies. —Tyler McFadden

High energy hip-hop artist Futuristic’s ’lectric performances are a must-see this year. His breakout song “The Greatest” has over 20 million YouTube views, so don’t say we didn’t warn you. And if you’re trying to keep count on how many words he can rap in a minute, we counted, and it’s a lot. Trust us. —Amber Funk