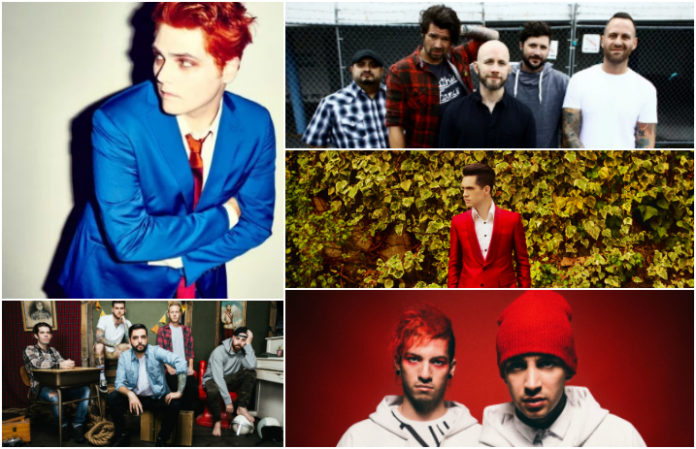 In early phases of a band, a stage sometimes isn't even an option. There's something about playing directly on the concrete of some shifty basement at eye-level with the audience that creates a very special mood. But sometimes bands are compelled to recreate that basement show vibe in a setting with hundreds or thousands of people when they have a stage readily available for their use. Perhaps they miss the intimacy? Who knows. Anyway, here are eight times artists had a stage but decided they didn't need it.

Brendon Urie has made a habit of carving a path through the crowd during “Death Of A Bachelor” live, much to the delight of fans who get to experience it super-up-close, as you can see in this video. Read more: 11 incredible Panic! At The Disco tattoos you really should see

Read more: 11 incredible Panic! At The Disco tattoos you really should see

Even with his ankle in a brace, Taking Back Sunday frontman Adam Lazzara used to make his way through crowds at every show during the band’s self-titled era. Now that’s commitment to abandoning the stage. Plus, Lazzara is about 6’4”, which means no matter where he was in the crowd, he was usually still visible.

Sorry, Twenty One Pilots fans: Josh Dun didn’t invent the ol’ drums-in-the-crowd trick. Anti-Flag have been playing ring-around-the-drum-set for years. It’s been a set staple for them for well over a decade.

Now, that last entry was no shade on Twenty One Pilots, who are absolutely thrilling live, one of the reasons for which being their ol’ floating drum set trick. Have you ever been on the underside of “Drum Island” ? Seriously. Let us know in the comments. We want to hear about it.

Keeping Tyler Joseph’s feet on a stage is not an easy feat. We can think of at least two instances where he was specifically warned not to climb things and did, and then there was this move of actual insanity when he decided to crowdsurf through thousands at Reading Festival last year.

Okay, we’re only including this because nearly all of the MCRmy had a heart attack when it happened because GERARD. WAY. DOES. NOT. LEAVE. THE. STAGE, like, ever. So, we were all left agape when he dove into a crowd while performing with Weezer and fellow MCR members Mikey Way and Ray Toro (who is a known Weezer fanboy, by the way). Add this to your “Rare MCR Moments Brought To You By PoisonAndFire.”

The giant hamster ball that frontman Jeremy McKinnon jumps into the crowd with has become an iconic staple during many of A Day To Remember's sets, mostly during “It's Complicated” or “Homesick.” This crowd interaction takes place inside of venues as well as outside festival arenas like Soundwave.

Since the days of Gallows, Frank Carter has regularly acquainted himself with the pit. In this video from this year’s Carolina Rebellion, Carter exits the stage and ends up in a handstand above the crowd.

One of the highlights of Warped Tour 2009 happened during Aiden’s set. Before “I Set My Friends On Fire,” vocalist William Francis jumped off the stage and gave a pissed off speech, generally scaring the living hell out of unsuspecting members of the crowd and ultimately inciting a delicious wall of death.

Did we miss any of your favorites? Let us know in the comments!