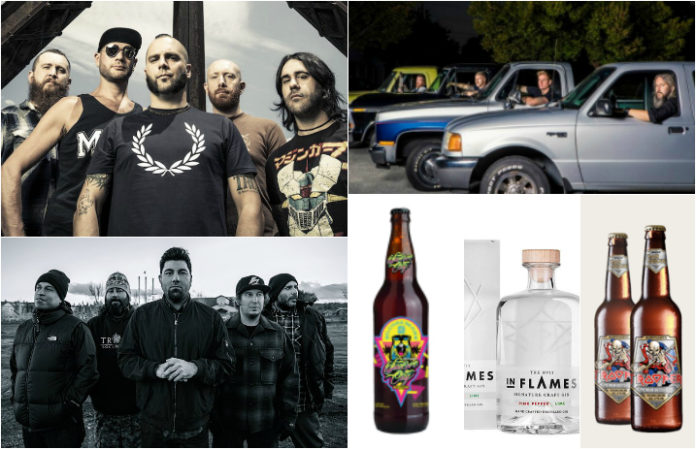 Southern California punks Pennywise have partnered with Lost Coast Brewery to produce “Pennywiser” beer, which will be available as a limited release in select Southern California stores, bars and restaurants in early September, with expanded distribution in the coming months.

In collaboration with Hope For The Day, Mastodon will be hosting a special headlining show in Chicago on Sept. 9 in support of the organization’s work with suicide prevention. Plus, the show will see the pre-release of the band’s new “Crack The Skye” beer, named after the band’s 2009 album that took inspiration from drummer Brann Dailor’s sister Skye, who died from suicide at 14, according to ThePRP. It’ll get an official release Sept. 10, on World Suicide Prevention Day, with a portion of the proceeds being donated to Hope For The Day as well.

The band also just announced that they’re producing another new beer: “Hallowed,” which is set to be released soon and will only be available for a four-month run, according to Billboard.

DJ duo Dada Life unveiled their Dada Life Champagne—and they’re reportedly the first musical act to release a champagne to their namesake. A traditional blend of Pinot Noir, Pinot Meunier and Chardonnay, it’s currently available for purchase on their site—DadaLifeChampagne.com—that’s amazing to drink and spray.

In Flames “In Flames No13” gin

In Flames released a limited-quantity craft gin called “In Flames No13,” which, according to Metal Injection, features frontman Anders Fridén’s signature flavor. There are only 2,300 available, though, and you can order it here.

Deftones are back in the business of beer: The band launched their Phantom Bride IPA by Belching Beaver Brewery, which says the flavors were handpicked by Deftones frontman Chino Moreno and named after the song with the same name.

They are now debuting a new IPA beer, called Swerve City, which Metal Injection explains is a “tropical fruit bomb with a juice-like finish,” named after the opening track from the bands 2012 album Koi No Yokan. It’s set to be available at some point this summer.

Sammy Hagar and Adam Levine became friends over their shared love of tequila, according to their brand site santomezquila.com, and they combined mezcal with tequila in a “revelation” that created a higher spirit.

Ah, Hanson. The brothers run Hanson Brothers Beer Company, a small beer business founded by “three brothers and friends who are passionate about craft beer,” their site explains. Though it’s mostly just available in their home city of Tulsa, Oklahoma, it’s not totally impossible to get your hands on the pale ale at Oklahoma-local liquor stores (and a few select bars, retailers and restaurants across the country!).