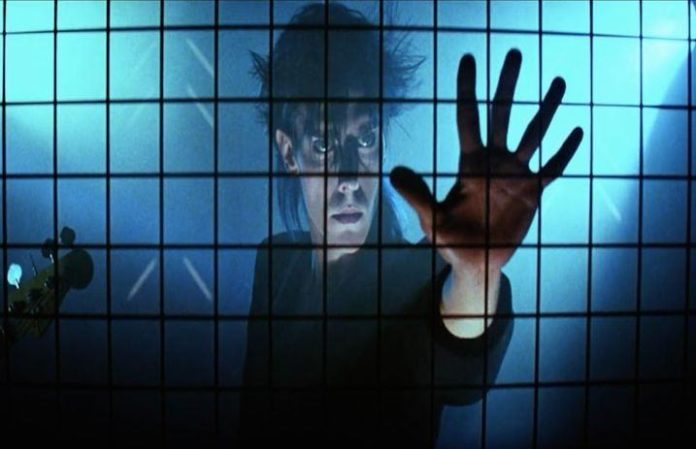 After an attempt at self-publishing stalled the project for a year, the much-anticipated book celebrating gothic-rock icons Bauhaus, is slated for release in March. Put together by Bauhaus drummer Kevin Haskins, the book Bauhaus Undead: The Visual History And Legacy Of Bauhaus, chronicles the band’s career through photos, fliers, setlists, lyric sheets and Haskins’ personal anecdotes of the band’s career. Beginning with their 1978 inception in their hometown of Northampton, U.K., and ending on their final album (2008’s Go Away White), the book is a must-own for goth-rock devotees and rabid post-punk enthusiasts alike. You may preorder the book here prior to its March 16 release.

What follows below is an excerpt from Bauhaus Undead, centered on the day the band met bona fide rock icon David Bowie. You can see the band performing in the opening credits of the 1983 modern vampire movie The Hunger, which starred Bowie, Susan Sarandon and Catherine Deneuve. Here Haskins recalls the film set, being part of a personal audience with Bowie and experiencing one of the most enviable fanboy moments ever.

THE HUNGER
One of the most anticipated days in my career was our part in the filming of The Hunger starring David Bowie and Catherine Deneuve. The film was based on Whitley Strieber’s novel of immortal beings and vampirism set in modern-day America.

Although we had the unnatural set time of 7:30 a.m., March 22, 1982, couldn’t arrive soon enough. Bauhaus were contracted to perform “Bela Lugosi’s Dead” in the nightclub scene where Bowie and Deneuve’s vampire characters were hunting for young blood.

The Hunger director Tony Scott: “I love rock ‘n’ roll and impact at the beginning of movies, and Peter Murphy had this sort of ethereal, vampire quality to him, and I thought that would make an interesting opening title sequence in the movie.”

Although the scene was set in New York, it was filmed at the London nightclub Heaven, a club where we had previously played. We were all very big fans of Bowie and, like many musicians of the post-punk era, Bowie’s performance of “Starman” on Top Of The Pops, was a significant and profound turning point in our lives. So to say that we were excited was somewhat of an understatement.

Prior to the filming, Tony Scott wanted to re-record “Bela Lugosi’s Dead” so that he would have his own designated version. We were booked into Morgan Studios in January ‘82 with the musical supervisor on the film, Howard Blake. Classically trained, Howard had attempted to transcribe our recording, which was a formidable and almost impossible task. Unfortunately, he couldn’t achieve what he wanted due to the experimental and spontaneous nature of the dub delays and Daniel’s experimental guitar work on the original version. As we had already captured a good live version the previous November at the Hammersmith Palais, frustrated and defeated, Howard and Tony eventually agreed to use that recording.

Radiating with charisma, and walking with a confident swagger, Bowie arrived on set in green designer army fatigues, appearing a tad shorter than I had imagined him to be. After surveying the set, he disappeared in to hair and makeup, later to emerge, magnificently transformed, sporting a very resplendent black silk suit and jet black pompadour wig…he looked amazing!

We were then ushered on stage to play our part, Peter delivering an electrifying performance, I’m sure spurred on by the knowledge that Bowie was watching from the wings.

After Tony was satisfied with our part, the crew had to set up the next shot, and I watched as David Bowie’s stand-in took his place. It was then that I noticed the real Bowie gravitating toward an old Wurlitzer jukebox, housed in an adjacent room of the club. I, along with about 20 extras, regulars of the club and who, one could tell, were also big fans, followed him at a respectful distance. David proceeded to begin selecting records, and so we all moved closer, and eventually, on his invitation, sat down before him. It was from that point on, for the next two blissful hours, that we were treated to a private audience with the legendary musician! Many of the songs he played were from his LP, Pin Ups, and he regaled us with wonderful stories about when he originally saw the bands at the Marquee Club and Eel Pie Island, and why he chose to record each one: Bands such as the Yardbirds, the Who, the Kinks and the Pretty Things, etc.

As this remarkable day was coming to a close, I was looking for a light for my cigarette and asked David’s assistant Coco for one. Unbeknownst to me, Bowie was only one foot away from me, hidden from view, just the other side of a doorway. She said words to the effect of “Sorry, I don’t, but I think that David has one.” It was at this moment that he magically appeared before me, presenting a lit lighter! It was all I could do to manage to bring the cigarette to the flame, as my starstruck hand was shaking so uncontrollably! He had a devil of a time actually getting it lit, but eventually succeeded, and so, yes, David Bowie lit my cigarette! alt