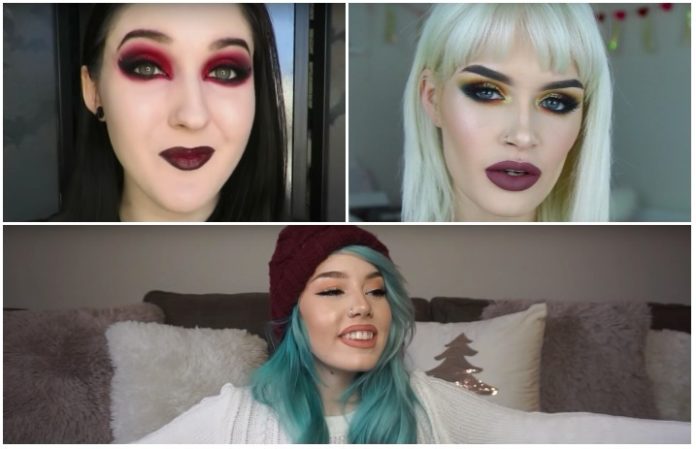 The DIY makeup and beauty vlogger has become one of the most commonly found careers to stem from social media, mainly Instagram and YouTube, the latter being the No. 1 platform for anyone interested in the beauty world.

“I was kind of obsessed with makeup tutorials on YouTube in high school,” Austin, Texas-based beauty vlogger Hailie Barber says. “I watched a lot of Jaclyn Hill, a lot of Shaaanxo. The transformation process was always really fun, so I started to practice on myself after school, and it turned into something that I really enjoyed and eventually did for myself.”

Barber is best known for her extremely colorful looks, from her ever-changing vibrant hair color to her bold pastel and neon-colored eyes. Her reviews and tutorials have gained her a well-deserved 112K subscribers on YouTube and 365K followers on Instagram, as well as being the featured face of the My Little Pony x Pur Cosmetics collaboration.

“The beauty community on YouTube I discovered at [17 or 18], and there was so much out there that I just didn’t really know was out there,” explains Victoria Ditrich from the YouTube channel Biohazardous Beauty. “That really got me into playing with different colors and different products and really exploring all of the different things that I could do with makeup.”

Ditrich, who has 64K subscribers on YouTube, took a more unconventional route as a beauty vlogger. Focusing primarily on indie brands, cruelty-free makeup and alternative depictions of beauty, Ditrich is most commonly recognized for her dramatic cat eye—and overextended winged eyeliner that outlines the shape of her vampy and smoky eyeshadow. Through her triumphs on YouTube, she has become the model for indie makeup brands such as Concrete Minerals and My Pretty Zombie.

“My interest in makeup began around the same time that I got into music,” says Ashley Feasel of the channel Atleeeey. “I remember having magazine posters taped up on my bedroom walls with bands like Good Charlotte, My Chemical Romance and No Doubt. To me, the best part about their looks was the makeup, so I started buying tons of black eyeliner.” Feasel began her beauty career through Instagram before moving to YouTube, where she is best known for her dramatic, angular looks characterized by large false lashes, bold color and an intense winged eyeliner.

After just a year-and-a-half, Atleeeey has gained 138K subscribers on YouTube, with a huge spike in her channel taking place last year when she launched her first-ever Ashtober Fest, an entire month of makeup tutorials dedicated to showcasing Halloween-themed looks.

And while YouTube is a great platform to express one’s creativity, one has to remember: At the end of the day, YouTube itself is a major corporation. And, over the last year, and most significantly in the last six months, YouTube has begun a demonetization process that has put a halt to hundreds of the DIY-based creators and artists who have learned to live off the platform.

Read more: You can listen to music on YouTube and still use your phone—here’s how

The basic breakdown of the situation is this: When a content creator hits a certain number of subscribers or views per week, YouTube gives creators the opportunity to make money off their content by allowing ads to appear within, before or around their videos. From these ads, YouTubers make their income. This is called AdSense. Recently, advertisers have noticed that their ads have been appearing on what they deem non-user-friendly content. For example, if an anti-gun company appears on a YouTube channel that is reviewing hunting rifles, there are obvious conflicts. To fix this, YouTube created an algorithmic bot system that allows every video to be scanned within its first week of uploading to make sure that content is user-friendly for advertisers. Unfortunately, the algorithm is extremely flawed—at least most content creators believe so—as simple videos are getting demonetized without explanation.

“At this current moment, most of my videos, I would say nine out of 10 videos, as soon as I upload them, or even if I upload them and they are private, they will get automatically demonetized,” Ditrich says. “The reason they are getting demonetized, I don’t know, because they don’t send me a reason, and that kind of sucks because I can’t fix it if I don’t know the reason. Most of my views have been within the first one or two days of when I upload a video, and that’s about how long it takes for [YouTube] to review it; so once they review it, [the video has] already been live for a while, and I already have a couple thousand views. I miss out on almost all of the revenue that happened during that time.”

“YouTube has a new algorithm that automatically demonetizes any content that doesn’t follow its guidelines,” Feasel notes. “It’s a good idea in theory, but the algorithm isn’t always correct, which leaves perfectly fine videos demonetized for long periods of time. If your video does, in fact, follow the guidelines, you can submit a review on your video. YouTube takes days or weeks to review your video, and once they remonetize it, you’ve lost out on most of the AdSense that would’ve come from that video. A few of my videos were demonetized for no reason, including a video I uploaded doing my boyfriend’s makeup.”

“I don’t even know what triggers it,” Barber adds. “My last video that was demonetized was me going to a My Little Pony party.” The party Barber is referring to is one celebrating her launch as the face of Pur Cosmetics’ latest collaboration with the iconic children’s brand, My Little Pony.

“I think YouTube should properly test their algorithms and maybe have a better review system in place,” Feasel says. “They’ve really screwed some people over, myself included, and I’m on a much smaller scale than other YouTubers who have been affected. I’m sure if there was another platform to go to everyone would be there. But YouTube seems to be the only platform of this kind at the moment.”

Could this mean a decline in YouTube as a personal platform? Many of the beauty gurus who aren’t making money with millions of subscribers are debating leaving YouTube for other outlets such as Instagram or Patreon, an artist’s subscription service that works like Kickstarter by offering rewards for monthly backing. “I, myself, have been exploring other options,” says Ditrich, who has launched her own Patreon account. “Twitch has been really popular. I haven’t checked that out myself yet, but I do think that it’s going to cause people to leave [YouTube], or something new is going to have to emerge that’s going to have to fight YouTube.”

On the flip side, makeup artists like Barber have even noticeably removed themselves from YouTube. “I have taken a break from YouTube,” says Barber, who has since returned but took a three-week hiatus at the time of this interview. “I think, basically, you just have to roll with the punches, and in time it will either get better or there will be somewhere else where you can post your content. But it’s not fair to just stop altogether, because we do have supporters who love our content and look forward to it. I like to post a lot more on Instagram because I feel like people actually see my content there, and I just feel like, overall, it’s a better platform right now.”

The DIY nature that initially launched YouTube into success has since depleted under the constraints of corporate advertising. So, the question becomes: Will YouTube’s platform monopoly reign supreme, or will it crumble to the way side and let artists prevail?