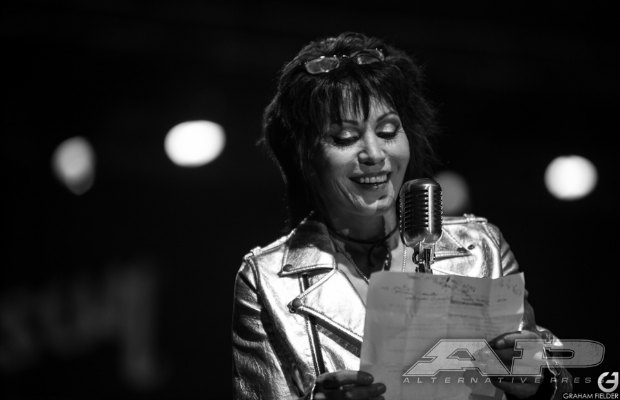 Monday night, at our inaugural APMAs, we presented the legendary Joan Jett with our first-ever Icon Award. With a career spanning nearly four decades, first with The Runaways, then as a solo artist, and, subsequently, as part of Joan Jett And The Blackhearts, Joan has truly earned the status of “icon,” not just for her role in helping popularize punk in an uncompromising way, but also for her empowerment of women in music.

Against Me!'s Laura Jane Grace introduced Jett, delivering a heartfelt speech and recounting Joan's influence on her own musical upbringing.

“I cannot begin to express how honored I am to give this Icon Award, presented by Blackstar Amps, to one of my heroes: the one and only Joan Jett,” stated Grace, visibly giddy to be presenting.

“I was looking back through some old journals recently, and found an entry from 2006. My band was out on the Warped Tour, and so were Joan Jett And The Blackhearts. I had just got done playing, and was sitting on the side of this trailer stage, covered in sweat, panting and out of breath. Joan walks up and asks if I need a can of water. 'Holy fucking shit, Joan Jett is so cool,' I wrote down in my journal that night. There she was, a total fucking legend, and she was hanging out with the rest of us Warped Tour wannabes. She wasn’t hidden on her bus, off limits and out of touch. She was real, and that translates into the music. As a parent of a four year old little girl who wants to be a drummer when she grows up, I can’t think Joan enough for the path that she cleared through rock and roll, refusing to recognize any pre-established gender roles.”

Grace continued, “She didn’t knock on the door and ask to be let into the boy’s club; she kicked the fucking door down, and she did so with a [Gibson] double cutaway. But it’s not about gender, it’s the sound; that four on the floor rawness, the shred of her guitar, and the growl in her voice. The sound is androgynous, and it’s so right on. She doesn’t need me to tell you who she is: she’s Joan fucking Jett, and this [award] is for her.”

Following that heartfelt introduction, Jett, channeling her typical sense of cool, thanked Laura and noted, “It always shocks me to hear what people have to say about me in a positive light. It’s very humbling and virtually brings me to tears,” before commenting on meeting Ice T and Body Count.

“First of all, I would like to think AP and Mike Shea for this honor,” Joan began. “Being the first is kind of dirty, and it's great. I love being their first, so I want to thank them. I also want to thank Josh Bernstein and Kevin Lyman for keeping this music alive, along with you all, the fans, keeping this music listened to and noticed. I want to thank my parents, Jim and Dottie, who have passed away, who encouraged me from the time I was born to do what I wanted to do; that girls could do or be anything. When I said I wanted an electric guitar for Christmas when I was 13, they didn't say 'girls don't do that,' and this was at a time when a people said that all the time. Without them, it would have ended right there.”

The singer continued, “I want to thank the Lagunas for believing in me and fighting for me. Right after we met, Kenny, who is my songwriting partner, my producer, my best friend, and my manager, used his child's future college fund to start what became Blackheart Records. We printed up 500 records and sold them in the trunk of the car, and that became Blackheart Records. Now that child runs our whole enterprise. So, I'd like to thank Carianne Brinkman for having the vision and the smarts to create and run Blackheart. Thanks kiddo, I love you.”

Jett finished with a sincere “I'd like to thank my band, The Blackhearts, and everyone at Blackheart Records. Let's hear some more music. Thank you everybody.”

You can watch her acceptance speech below.

Okay, let me just have this moment. I shared a stage with @joanjett and @Slash tonight. Woah.

Joan Jett is an icon not only for every girl but for every person that doesn't let others stop them from achieving their dreams! #APMAS

Met a huge inspiration of mine tonight. A woman who embodies passion, strength and courage. @JoanJett #APMAS pic.twitter.com/QkeTnqKfcM