Benét sets out to change the pop game in new ‘Game Over!’ EP

A 21-year-old nonbinary vocalist and producer from Richmond, Virginia, Benét is set to reshape the future of Gen-Z R&B and dance music through DIY capabilities on their new EP.

Inheriting their grandmother’s vinyl copies of 1973 landmark albums, including Stevie Wonder’s progressive-soul classic Innervisions and the soft-pop brilliance of Now & Then by the Carpenters, Benét aspires to craft a sound just as timeless. Previously releasing a handful of singles through local boutique record label Citrus City Records, the vocalist joined Brooklyn indie enclave Bayonet Records, veering from die-hard anthems dedicated to TV shows Glee and Killing Eve to the nuances of young love. Penning similar tracks for Gen-Z favorites such as Euphoria, Adventure Time and Steven Universe, Benét admits that they’d jump at the chance to eventually become a music supervisor.

“Being heavy in stan culture and watching different shows, I’m like, ‘Oh, this happened in the show. I can write about it,’” Benét says. “I’ve always been able to see an experience in front of me, pull it into my own writing and connect it to me in some way.”

Naturally drawn to visual expression, the ability to connect with television translated to Benét immersing themselves within Richmond’s artistic community. Actively collaborating with artists whose voices are seldom acknowledged, Benét creates intentionally with their “Black, queer homies” in mind, those they know both online and in real life.

Playing keyboard and co-producing using Ableton with frequent collaborator Cam Smith, Benét’s four-track debut, Game Over!, is a delicate blend of carefree vocal harmonies and nü-disco synths. Benét spoke with Alternative Press about the authenticity of Virginia’s music scene, their R&B upbringing and expanding their creative palette through social media.

How did Virginia shape your music, in general?

Pretty heavy. Virginia’s got some pretty golden people in it. The scene in Richmond has always been so deep—it’s such a community. I learn so much just by being around so many people that I look up to in this city. They [either] come here and stay here, or they’re born here and make such an impact all over but stay in this community. That makes Richmond specifically a very strong place to grow musically, and it’s been awesome.

So people outside of Virginia are familiar with the Neptunes, Missy Elliott and Timbaland being from there. So which production duo do you prefer?

I’m gonna have to say Timbaland and Missy. With the Neptunes, you can tell that it’s Pharrell and Chad [Hugo] on a track, but Timbaland and Missy have made a sound that’s just—you can’t do it again. You really can’t. A lot of people try to get the “Pharrell sound,” and they come close, but Missy Elliott alone is too incomparable.

Missy’s sound is undeniable. You’re 21 years old, which means you were an infant during the Y2K era of music. What were some of the earliest artists you remember being a fan of?

Definitely John Legend and Chrisette Michele. They’re a little older, but Kanye West was producing all these R&B albums. He produced Get Lifted and Once Again by John Legend, which is one of my favorite albums of all time. Around that time, those were the first pieces of music that I listened to [and thought], “This is crazy. I didn’t know music was this good.” I know a lot of music, but I can’t really [place] it on a timeline.

So you were mainly raised on R&B?

Yeah, definitely. I didn’t really get into hip-hop until my sister gave me her iPod, and it had Beam Me Up Scotty by Nicki Minaj and Astronaut Status by Future, and I was like, “What is this?” [Laughs.] I was in seventh or eighth grade, and I was like “Whoa, this is crazy.” 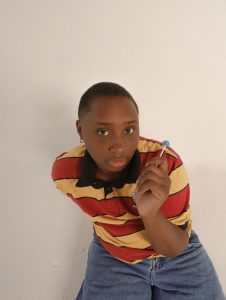 It’s funny to think that you were probably 10 when Beam Me Up Scotty came out, but let’s shift over to your current music. Musicians can go viral instantly on social media. What platform would you credit with expanding your audience?

I want to give my everything to Instagram, but I can’t because I had a TikTok for “Killing Eve” that went viral, and it’s given me a lot of people that like what I’m doing. So, I’ll have to say TikTok because it’s easy to get a chance—it’s like a cult thing. I’m not huge, but I made one TikTok that got 100,000 views on it. My song isn’t huge now, but I think [TikTok] is the reason I’ve got any streams on that song.

Stan Account was a small A-side and B-side that I put out with a local label last year. One song is called “Killing Eve,” and the other song is called “Glee.” I pay respect to shows that I’ve stanned in my lifetime.

What made you write about those shows in particular?

I actually still am a Glee and Killing Eve stan. I grew up with Glee, and that’s how I got into Twitter, tumblr and social media—from being obsessed with the show and wanting a community. I spent a lot of time inside focusing on my Glee stan-ships.

In my adult life, after Glee, I didn’t stan much else besides Fifth Harmony. [Laughs.] I started watching Killing Eve, and I was like, “This is hitting me in a similar way that Glee did.” It was so different the way I navigated being a stan but still liking something equally as much—I still have a secret stan account for Killing Eve. So I wrote those two songs in a way to pay respects to two shows that shaped a little bit of me.

When connecting with other artists, what do you look for in potential collaborators?

What I look for is respect. I’m an honest person. I don’t always love what everyone makes, but that won’t stop me from working with you. I’m not saying I make the greatest music, but I might like what we make if we worked on it [together]. Things like that don’t stop me. If I like what you do and how you move within the community—because it’s tight and people talk—and if I feel like I can trust and I respect what you’re doing, then I’m pretty much down to collaborating with anyone.

Your EP is titled Game Over!, but it seems like you’re just starting. What was the idea behind the title?

I am a simple, simple man. The shoes that I have on, they really do say “game over!” on the sole. I took that picture, and I was like, “Damn, this is cute.” That’s how the title came to be. I also think that phrase is perfect for me because I’m out here trying to change this pop game, in a way. It’s good to come on the scene feeling confident and being so different for the genre.

Game Over! incorporates a lot of synth and nü disco. Were you listening to a culmination of ’70s and ’80s music while recording?

Me and the producer of the whole project, Cam Smith, we’re very competitive, so I’m like, “Have you ever heard this song before?” We listen to too much, but I’m a sucker for pop. I always have been. I think we were listening to Dua Lipa in preparation for the EP—Future Nostalgia is good. I listen to a lot of Mary Jane Girls [and] ’80s pop, for sure.

Mary Jane Girls are a throwback. How were you introduced to them?

My mom. [Laughs.] I don’t want to give her credit because she is so smug, but I honestly would not be listening to anything good if it wasn’t for my mom—she has the craziest music taste. My grandma, too. She passed down four crates’ worth of records that I flipped through all my childhood until now.

When did you come out as nonbinary, and what did you learn about yourself when you made this decision?

Glee opened me up to a lot of people on the internet and a lot of things. I knew very early on that I was trans and nonbinary. I didn’t really come out until I was like, “Yo, I’m about to get top surgery.” [Laughs.] I also had a partner one day that wasn’t a cis-male. I never really had to come out. It definitely was a conversation after, but I’m grateful for the response that I do get—I never had to hide who I was.

What does the visibility of queer and nonbinary popular artists mean to you?

A lot of the time, it can feel not very intersectional, especially me being a trans-masc person, so I definitely would like more representation in that way. There’s starting to be a lot more recognition for trans-fem people, which is awesome, but there’s a certain type of queerness that is more acceptable than others due to racial and minority things. It’s been cool to see Serena Isioma and [other nonbinary] people make an impact.

What is the vision that you have for your career? Or are you leaving it up to uncertainty?

I want to be able to work with other people that deserve to be heard, but I’m gonna let it rock on, whatever happens. Whatever is for me will be for me.