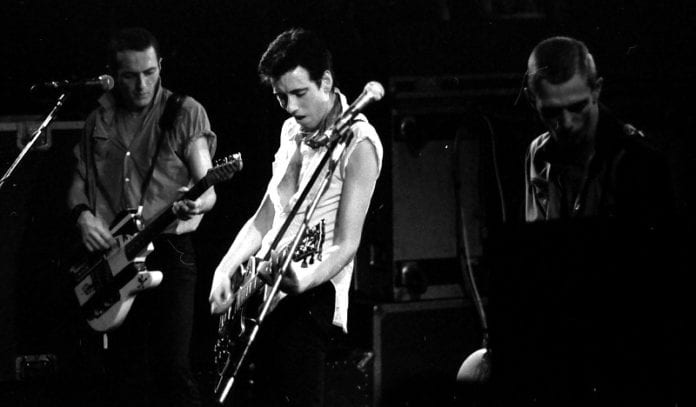 By 1979, punk was firmly established. Seemingly, a million new bands formed weekly, releasing great singles seconds later. But some of the old guard were starting to feel constrained by angry teenage ramalama. Where else punk could go? These are the best punk-rock albums of 1979.

As bands such as the Clash and the Damned expanded their vision, newer bands came along, acting like it was still 1977. And they were good. Other acts expanded on punk’s remit, playing artier sounds infused with modern energy. Meanwhile, a harder, faster variant on old-school punk was brewing in Los Angeles, about to overtake the entire American scene for the next two years. The Germs would be spreading the hardcore gospel. However, it would be the Clash who’d release the best punk-rock album of 1979, right at year’s end.

“They make us feel indebted/For saving us from hell,” singer Jake Burns tonsil-shreds over a riff cribbed from Montrose’s “Space Station #5,” an artifact from Stiff Little Fingers’ heavy-metal past as Highway Star. “And then they put us through it/It’s time the bastards fell!” “Suspect Device,” rerecorded from the Belfast quartet’s debut 45 for Inflammable Material, displayed a more potent and humane political punk. Equal amounts of Irish warmth and melodicism scattered through these raw screams, born of advice manager Gordon Ogilvie offered Burns: “Write about what you know.” Hence the Troubles fueled “State Of Emergency” and “Barbed Wire Love.” Add “Breakout,” the first of many compositions dealing with small town constraints, a la “Gotta Gettaway” and “At The Edge.” The Clash obviously inspired SLF, down to rocking up Bob Marley’s “Johnny Was.” Forty-one years later, Inflammable Material still screams.

The future enters, riding a relentless bassline. Spawned by the legendary June 4, 1976 Sex Pistols gig at Manchester Lesser Free Trade Hall which catalyzed Buzzcocks, the Fall, the Smiths, Factory Records and everything else punk in that city, Joy Division themselves—as Warsaw—seemed content initially to ape the Pistols. Then they deconstructed their songs, experimenting with more of a motorik pulse, as singer Ian Curtis had a nervous breakdown through every song. Add in Martin Hannett’s unorthodox production, including extensive, then-novel use of digital delay, and post-punk’s born, as slinky as Curtis’ epileptic seizure dances onstage (developed out of personal experience). A classic punk-rock album.

If you thought the Clash grew, check out the Damned’s doings in the studio next to where London Calling was tracked. By third LP Machine Gun Etiquette, they’d dissolved, reformed and lost founding guitarist/songwriter Brian James. Bass lunatic Captain Sensible moved to guitar, writing several tunes by recording television commercials and playing the jingles backward. While “Love Song” and the title track were as aggressively punk as “New Rose,” the band experienced a certain musical wanderlust. Hence, Sensible indulged all the lead guitar he’d learned as a teenage Santana fan, still rendering it chaotically. Keyboards drove “I Just Can’t Be Happy Today” and “Smash It Up.” Hints that these guys weren’t ashamed of their prog records abounded.

“The thinking man’s Clash,” critic Greil Marcus dubbed these four university students from Leeds, U.K. Certainly, Gang Of Four were leftist enough to resemble members of the same genus as the Clash, though they were funkier and noisier. Drummer Hugo Burnham and bassist Dave Allen beat to shit Funkadelic rhythms. Recently deceased guitarist Andy Gill sounded like he threw his Fender down a staircase and cranked the amp loud. Singer Jon King recited polemics such as “Love Like Anthrax” and “At Home He’s A Tourist” almost clinically. Tense, minimalist and danceable, Entertainment! sonically resembled those moments during GoF live sets where Gill would run full pelt into King and bounce off him. Yeah, that good.

The first hardcore LP, no shit. For two years, the Germs publicly learned their instruments—drummer Don Bolles auditioned 30 minutes after receiving his first drum lesson. By the time Joan Jett herded them into the studio (and supposedly passed out for much of the sessions, according to lengthy “blues” jam “Shut Down (Annihilation Man)”—some have whispered that engineer Pat Burnette produced more than the ex-Runaway), Bolles, guitarist Pat Smear and bassist Lorna Doom were a fearsome outfit, blazing at fire-breathing tempos that made the Ramones sound slower than Black Sabbath. (GI) cranked the entire West Coast to thrash-o-matic velocity. Factor in the revelation that doomed, more-Iggy-than-Iggy frontman Darby Crash was a poet of considerable power and you have one of history’s most definitive hit-and-run punk full-lengths.

Reggae was U.K. punk’s go-to rebel sound. It’d been embedded into Britain’s consciousness for years via the chart-busting singles Trojan Records imported from Jamaica, as well as the periodic Tighten Up compilations. So it was natural that the Clash leavened their power chords with island riddims, DJ Don Letts spun his dubplates down at the Roxy and the former Coventry Automatics sped up Jamaica’s earliest pop sound—ska—to punk specs. They also folded in the Clash’s social realism and Roddy Radiation’s post-Thunders guitar into a sound that captured more kids’ imagination in 1979 than punk. The 2 Tone bands, of which the Specials were the spearheads, had huge hits and inspired fashion and racial theory with their mixed casts. ’Twas possibly punk’s sweetest legacy.

The same month America got Singles Going Steady, England received Buzzcocks’ third full-length. Much distinguished it. For one, the production predated modern cut-and-paste digital audio workstation methodology by 20 years. Rhythm section loops—on tape—were recorded and then painstakingly assembled into full takes for Shelley and Diggle to drop guitars and vocals atop. But songs such as “Hollow Inside” and “I Believe” reflected Shelley’s rapidly disintegrating psyche, splintered by his escalating LSD consumption. This also contains the last classic Buzzcocks single, “You Say You Don’t Love Me.”

Like the Germs, the entirely distaff Slits spent two years proudly learning in public. By the time Island Records pulled the trigger, singer Ari Up, bassist Tessa Pollitt and guitarist Viv Albertine’s scratchy skronk was only punk in attitude, now favoring the deepest reggae. Hence, U.K. dub master Dennis Bovell came along to man the mixing board. Cut-and-paste hit “Typical Girls” bordered on punk-pop, while vintage roars such as “Shoplifting” and “So Tough” now oozed like the most subterranean dub. Dressed in an iconic sleeve depicting the bare-breasted Slits covered in mud, Cut‘s one of the cobblestones paving the road to post-punk.

The Undertones emerged from Derry, Ireland, with adolescent vigor and a knack for a cracking tune. They penned Earth’s Greatest Single Not Named “Ever Fallen In Love”: “Teenage Kicks,” the song influential U.K. DJ John Peel insisted be his epitaph. With a debut that killer, there was no way these five could follow it up. They sure tried hard, though. Their debut LP surrounds “Teenage Kicks” with 15 slices of the most perfect punk-pop made, with hard-charging yet frothy fare such as “Jimmy Jimmy,” “Get Over You” and “Here Comes The Summer.” Singer Feargal Sharkey bleats like a sheep, brotherly guitarist bookends John and Damian O’Neill surround him in a cloud of tangy distortion and the Billy Doherty/Michael Bradley rhythm section keeps the grooves tough and propulsive.

Blondie began the year with their first U.S. No. 1 single, their Eurodisco pastiche “Heart Of Glass.” It made instant superstars of Debbie Harry and crew and fueled accusations of selling out among their CBGB peers. Parallel Lines, the 1978 accompanying LP, should’ve dispelled these notions with manic pop thrills such as “Hanging On The Telephone” and “One Way Or Another.” October 1979’s Eat To The Beat killed the sneers dead. For one thing, it opened with Blondie’s most punk moment, “Dreaming,” hinging on Clem Burke’s massive Keith Moon-esque drums and Chris Stein and Frank Infante’s power chords. Some of their most sinister rockers, such as “Accidents Never Happen,” also live on these grooves. This is Blondie’s peak.