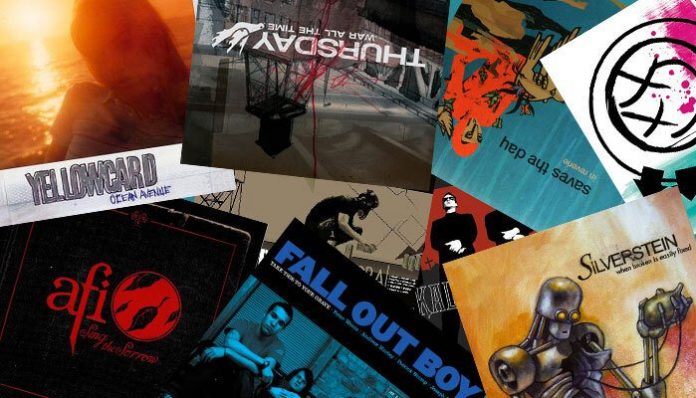 In 2003, major scene bands were gaining popularity on the Warped Tour circuit. The musical mixture of emo, pop punk and punk was growing in both the mainstream and the underground. As some of the millennium’s biggest names in the alternative scene started changing their sound, younger musicians joined in with their own take on the genre.

As the 2000s waged on, scene music adapted from its early beginnings. It became a wider-known genre that offered a variety of tones and styles. It provided both musicians and scensters with the opportunity to experiment beyond the alternative tradition. By 2003, some of today’s most well-known scene bands released their debut albums and set the stage for the next 20-plus years of music. Here are the best scene albums from that year.

Read more: See for yourself why Puddle Of Mudd’s Nirvana cover is getting attention

A Static Lullaby – …And Don’t Forget To Breathe

A Static Lullaby’s first album, …And Don’t Forget To Breathe, features similar elements of fellow post-hardcore acts such as Thursday. However, the album contains much more brutal vocals than others, highlighting some of the greatest components of 2003 alternative music. The range of screams to soft singing made this debut one of the most essential scene albums of all time.

While others were busy cutting their teeth on debut records, AFI were already releasing their sixth album, Sing The Sorrow. With singles “Girl’s Not Grey” and “Silver And Cold,” the band reached audiences they had not been able to previously. Their fanbase started growing to the size of a cult following thanks to their dark poeticism. With a mixture of genres such as post-hardcore, horror punk and more, AFI brought it all to their sixth album.

Good Mourning marked Alkaline Trio’s departure from their previous sound. Featuring polished punk with a great production value, their fourth album proved to be much deeper and more raw than anything they’d ever released. Alkaline Trio set off with their new sound and a newfound popularity among scensters.

American Hi-Fi – The Art Of Losing

The second album by American Hi-Fi featured intense guitar and a bold rhythm section. The Art Of Losing followed the success of their first record with singles “The Art Of Losing” and “The Breakup Song.” While the singles never charted, the album is regarded as one of the greatest alternative records of the early 2000s. Their upbeat and hopeful sound mixed with a rejection of authoritative control created punk-rock sensibilities for a new generation.

The Ataris – So Long, Astoria

In 2003, the Ataris mixed elements of punk, emo, pop punk, alternative and indie into their music. So Long, Astoria is a testament to their successful genre-blending. The album largely affected their mainstream popularity with singles such as the cover of Don Henley’s “The Boys Of Summer” and “My Reply.” Their lyrics showcased an optimistic outlook on deeply personal problems that we still enjoy hearing today.

Read more: Taste Of Tuesday: In 2003, the Starting Line became an overnight success

Pop-punk legends blink-182 released their unforgettable Untitled record in 2003. The album came after a lot of major changes for the band members as they became fathers and, as a result, their sound changed with them. While keeping their signature pop-punk sound, they left their early-20s vulgarity in the past and experimented to create seriously emotional ballads such as “I Miss You” that made the album soar in popularity and reach mainstream audiences. The record is a major turning point in blink-182’s history and the sheer force that is their music.

The second album from Brand New, Deja Entendu, showed a new and dynamic sound from the band. Rather than follow the lead of their previous album, Brand New’s lyrics focused less on girls and love and turned to the deep emotional torment of youth. If their first album didn’t solidify Brand New as one of the greatest alternative bands of the 2000s, then their second album surely did the job.

Chiodos – The Heartless Control Everything

Originally under the name the Chiodos Bros., the band now known as Chiodos released their third EP, The Heartless Control Everything, in 2003. The EP features classic Craig Owens vocals with deeply personal lyrics and upbeat instrumentals. It showcases the creative energy that fueled the future of the band, with songs such as “Compromise Of 1984” and “The Lover And The Liar.” The Heartless Control Everything set the stage for the future of scene music with the band’s use of screams, key instrumentals and intense breakdowns.

Dashboard Confessional – A Mark, A Mission, A Brand, A Scar

Dashboard Confessional’s third album, A Mark, A Mission, A Brand, A Scar, followed after Chris Carrabba had established himself as a pillar in the alternative crowd. With his soft voice and heartfelt lyrics, the album was a statement on love, romance and yearning. Carrabba successfully mixed the core of emo music with an upbeat flare that makes Dashboard Confessional’s third album one to remember.

The Early November – The Room’s Too Cold

The Early November made their entrance with their debut album, The Room’s Too Cold. They brought similar elements of emo and pop punk that were present on their 2002 EP but with more of a dark ambience this time around. The album is notably experimental with instrumentation and vocals. With songs such as “My Sleep Pattern Changed,” the Early November flexed their abilities to go from soft and wanting to defeated and filled with disdain.

Read more: Watch Fall Out Boy play their hearts out in 2003

Evanescence’s Fallen put them on the mainstream alternative map in 2003 with their hit single “Bring Me To Life.” The band were a tour de force in every facet of punk, emo and rock. With Amy Lee’s captivating vocals backed by Ben Moody and David Hodges’ instrumentation, the album quickly became a hit.

Fall Out Boy – Take This To Your Grave

Fall Out Boy took the alternative world by storm with their debut album, Take This To Your Grave. Fans found Patrick Stump’s voice to be a polished instrument that established the range of emotions that people experience, whereas Pete Wentz’s unclean vocals showcased a gutteral outrage toward heartbreak and betrayal. Their first album put Fall Out Boy on the map, and they’ve remained alternative royalty ever since.

Hailing from California with roots in the mid-’90s, Linkin Park broke through the music scene with their second album, Meteora. With experimental sounds of nü metal and rap alongside nontraditional instrumentation, Linkin Park became one of the largest names in the scene. In 2003, it was nearly impossible to go a day without hearing “Numb” on the radio.

Motion City Soundtrack – I Am The Movie

After signing with Epitaph, Motion City Soundtrack immediately recorded their first album, I Am The Movie. The band incorporated emo elements with brutally honest lyrics alongside the speedy tempos of punk and synthesizers to create a sound only Motion City Soundtrack could achieve. The album gained so much notoriety among the alternative crowd that “The Future Freaks Me Out” has become an unofficial anthem of teenage anxieties.

Saosin released their first EP, Translating The Name, and immediately defined themselves as a force to be reckoned with. With a mixture of emo lyrics, speedy tempos and the intense vocals of Anthony Green, the EP gained overnight popularity and praise. The structured post-hardcore elements made Translating The Name one of the most influential works to come out of 2003.

Saves The Day – In Reverie

Saves The Day have been around since the emo boom of the ’90s, but as the band grew, so did their sound. After signing with the now-defunct DreamWorks Records, the band released In Reverie. While the album garnered lackluster sales, it did showcase Saves The Day’s willingness to push their sound outside of the emo box and move toward a more hopeful aesthetic over their initial morbid one.

Story Of The Year – Page Avenue

Under Maverick Records, Story Of The Year dropped their first album, Page Avenue, in September 2003. The band received recognition through their single “Until The Day I Die,” which graced radio stations during the summer prior to the album’s release. The band were praised by Linkin Park and recorded a music video with Joe Hahn for the single “Anthem Of Our Dying Day.”

Silverstein – When Broken Is Easily Fixed

Silverstein’s first album, When Broken Is Easily Fixed, took post-hardcore and emo elements that make it timeless. At the time, the band were still relatively underground, but their debut record made them a band to watch. With brutal and pleading lyrics, lead vocalist Shane Told’s delivery is a jarring experience of the raw dimensions that exist in the depths of the darkest emotions. When Broken Is Easily Fixed is one of the most deeply personal and creative albums of the year.

Thursday – War All The Time

Thursday made their major-label debut with their third album, War All The Time. The album reflects life’s biggest challenges and changes, varying from marriage to divorce, death and more. Thursday sought to establish the emotional distress that people experience during hardships through this album. They did so successfully, as War All The Time produced a large fanbase for the band and still holds up as a classic over a decade later.

Breaking through the mainstream with their single “Ocean Avenue,” Yellowcard immediately became a household name. Ocean Avenue is the band’s fourth album but the first to gain overnight popularity. The album features traditional rock elements with the addition of new instrumentation such as the violin. By combining the two, the band capture a youthful and freeing melodic sound. This record marked a turning point for the band, where they crawled up from the underground and entered the mainstream.