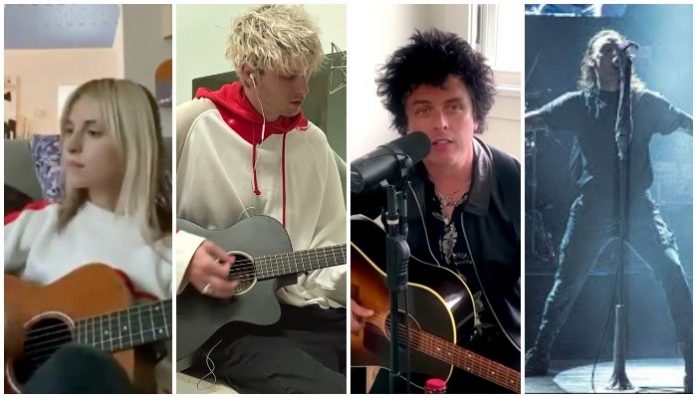 Due to the coronavirus outbreak, many concerts and tours have been completely canceled, leading to some artists turning to livestreams for fans. Dozens of artists have participated in the at-home concerts, trading the stage for places such as their couch or even the bathroom.

We rounded up 10 of the most interesting places artists have livestreamed concerts since the outbreak to applaud them for their creativity. You can check those out below.

This dynamic duo somehow managed to create a beautiful cover of “Champagne Supernova” by Oasis, from the comfort of separate bathrooms. If you shut your eyes while listening, you would probably think Machine Gun Kelly and YUNGBLUD were in the same room. The tile also made for great acoustics, so maybe they’re onto something.

Code Orange went hard when they performed an entire concert via livestream in a completely empty venue. It was a bit eerie to watch a rock show without seeing any moshing or hearing anyone sing along, but the band still brought their energy to the unique show.

In late March, Billie Joe Armstrong joined Billie Eilish, Dave Grohl and more for Elton John’s “iHeart Living Room Concert.” The Green Day frontman performed a fitting somber track, “Boulevard Of Broken Dreams,” from the comfort of his own living room, couch and all. It’s definitely not a sold-out arena, but the song still sounded amazing. He returned to the same stage this week for Global Citizen’s “One World: Together At Home” to perform another classic, “Wake Me Up When September Ends,” with a nod you might have missed.

Read more: Watch Machine Gun Kelly hotbox and rap in his car for “Smoke And Drive”

Death Cab For Cutie frontman Ben Gibbard has been performing concerts regularly for the last couple of weeks. He has a studio in his home, so his setup is pretty legit. Also, his voice sounds just as beautiful on a livestream as it does at a show.

5. Hayley Williams – On the floor

"anxieties are just too weird for me to orchestrate a livestream concert for folx (at least, for now). so instead i’ll make a space to put videos and voice-memos of me serenading my damn self at home!" – @yelyahwilliams pic.twitter.com/LCRIAu4IzR

Even though Hayley Williams isn’t ready to put on a full concert from home, the Paramore frontwoman has shared a video of her singing on the floor in her house. We can definitely relate as we’ve been finding some interesting places to hang out while being confined to our homes.

MAX performed a show from his piano at home, complete with a head-to-toe yellow outfit that definitely made us smile. He also appeared to be sitting on a bar stool the whole time, so it was definitely a DIY setup.

7. Evanescence – On the couch

Evanescence frontwoman Amy Lee has performed in a few locations at home since this got started, including strumming a ukulele on the couch.

Years & Years frontman Olly Alexander played songs from a keyboard at his flat in London while lighting incense, which was undoubtedly relaxing. He was generally trying to set the vibes the whole time, and his soothing vocals definitely helped.

Noah Cyrus decided to get some fresh air during her livestream by singing songs somewhere outside. She lives in Los Angeles, so the weather is definitely nice, and you can’t blame her for trying to enjoy it.

NPR is famous for its Tiny Desk concert series, so it didn’t stop when people were stuck at home. Soccer Mommy performed from her own tiny desk at home, and we appreciated that the series found a way to continue.