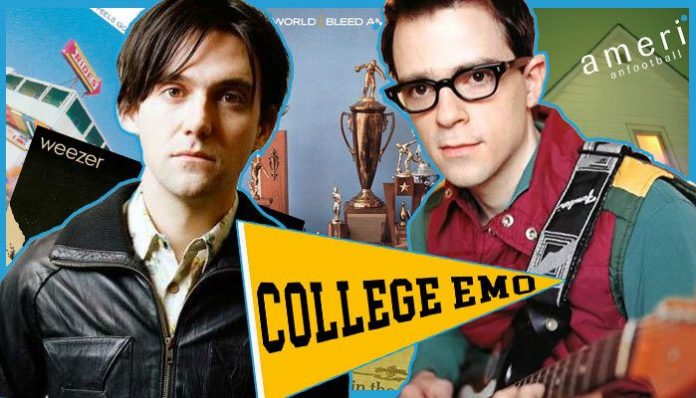 Writer/director Judd Apatow accurately summed up college when he said: “College is the reward for surviving high school.” It’s true. The college experience proffers unprecedented freedom and a constant buzz of wonder—alive in every cup of ramen noodles and late-night study group. You may have left your teen angst in high school, but you’ve only just begun to embrace your next emo phase.

Truth be told, as fun and reckless as college may be, it’s not all cheap beer sweats and bliss. Your late teens and early 20s are brushed with a million scary shades of anxiety, stress and confusion. Your brain bounces between complete euphoria and total dread at all times. One day, you’re falling in love. The next day, you’re flunking microeconomics. But fortunately enough, this vulnerable period of a perpetually heightened emotional state makes you susceptible to some profoundly excellent music. These selections from Alternative Press’ The Big Book Of Emo Album Covers pair perfectly with the highs and lows of higher education.

Read more: 19 of the best debut albums to come out of the scene

These records will make your time as an undergrad sparkle in magic in a way that the average kegger never could. They channel both the ’80s college-rock tenderness of the Smiths and the sophisticated, breakneck hardcore stylings of Fugazi. And in all honesty, you haven’t really been in love in your early 20s if you haven’t made a mixtape starting with “The Reasons” by the Weakerthans. You haven’t truly ached until you’ve felt your heart attempting to puke up memories of your ex while blasting Weezer’s Pinkerton. And the bleak disassociation from your hometown on Thanksgiving break hits harder while spinning the Promise Ring’s Nothing Feels Good.

These records are a rite of passage for a period in your life when everything feels infinitely possible and impossibly hopeless. You can cry along in solidarity with Bright Eyes’ candid, meandering nihilism on Lifted... Enjoy a blissful makeout session with the cute co-ed in your sociology lecture over the gentleness of the Postal Service. Relive the familiar warmth of your high school days with every listen of Jimmy Eat World’s “The Middle.” And you finally have the perfect companion for nights spent awake and terrified of post-grad life with Mineral’s The Power Of Failing.

Grab your headphones, put on your coziest Saves The Day hoodie and let these records articulate every emotion you’re sure to feel this semester.

Diary is a master’s thesis in the loud-quiet-loud dynamic that helped define grunge while being brutally forthright in lyrical emotion. Featured in both an episode of South Park and an installment of the Guitar Hero franchise, the album’s opening track, “Seven,” helped define emo and elevate its pop culture profile.—Bobby Makar

Also referred to as Shmap’n Shmazz, the only full-length by this Chicago band embraced so many idioms yet maintained a sense of vulnerability and dynamics that’s decidedly hard to pinpoint. The tracks were reissued in 1998 on Analphabetapolothology, a compendium containing all the group’s output. The members of Cap ’n Jazz went on to play in other bands (The Promise Ring, Owen, American Football) who are featured in this book for their contributions to the genre.—Jason Pettigrew

Pinkerton abandoned the breezy pop production of Weezer’s debut in favor of grit and isolation with lyrics revealing Rivers Cuomo’s most abrasively autobiographical work to date. Despite its initial commercial failure, the LP eventually found an audience besotted with its gushing-wound candor and solidarity in the feeling that all love is abysmally unrequited. One of the most important emo records of all time. [BM]

Mineral – The Power Of Failing

A crucial release from the ’90s era that also spawned outfits such as Christie Front Drive and Garden Variety, the first album from this Austin, Texas, unit offered a great amount of guitar noise (“Slower”) as well as hefty introspection. If moments of imitation were royalty checks, these guys would have banks, arenas and airports named after them. [JP]

The Promise Ring – Nothing Feels Good

There’s a lot to unpack from the sleepy strings of American Football’s first LP, with sneaking complexity behind quiet chords and the occasional trumpet. It doesn’t matter where you are in life: The dreamy vulnerability of AF’s debut transports one back to the trivial sadness of high school heartbreak.—Collin Goeman

While some argue its place in genre lore, there’s no swerving past the fact that Jimmy Eat World thrust an entire scene to the forefront with this record. Although poppier and soaked in rock influences, Bleed American served as a gateway drug for a generation of sad kids making sad music. [CG]

Bright Eyes – Lifted Or The Story Is In The Soil, Keep Your Ear To The Ground

The cowboy chords and indie-rock arrangements on Lifted may not immediately scream “emo,” but the lyrical heft of Conor Oberst’s masterful command of prose writing will scrape your soul with the vapidness of drug-induced, love-for-the-sake-of-feeling-something hookups. Oberst seemingly breathes poetry on tracks that articulate the futility of making art, weep for retribution and offer astute observations on relationships and self-worth, all delivered with timeless bite. [BM]

Death Cab For Cutie’s downcast, wistful guise isn’t a distinguishing trait but an enticing charm for those who seek beauty in tragedy. The band’s fourth album made an overlapping effect in both emo and indie-rock circles, raising the bar with a deeply introspective concept album about a desperate long-distance relationship.—Marvin Dotiyal

The Postal Service – Give Up

The droning tones of the Postal Service are drilled in the heads of anyone coming of age in 2003. Ben Gibbard’s mail-swapping project with Jimmy Tamborello (aka Dntel) highlighted the twinkly relationship between electronica and emotion, opting to back melancholy words with matching computerized beats. [CG]

Their third album finds Winnipeg’s masters of empathy at the height of their considerable powers. Over a set of spry power pop, melancholy Canadiana, a trio of sonnets and the most perfectly boisterous “get yourself together” anthem ever written from the perspective of a cat, John K. Samson and cohorts thaw inner tundras with seemingly endless, irrepressible warmth.—Jesse Richman

Empire! Empire! (I Was A Lonely Estate) – What It Takes To Move Forward

Truth in advertising: If the title of Keith and Cathy Latinen’s first LP doesn’t adequately explain the sentiment behind the music inside, you should probably go pick up something to feed your Xbox. The 15 epic understatements here will appeal to every wallflower who can’t fully articulate what they want or need from life. Don’t worry: The Latinens got this. [JP]