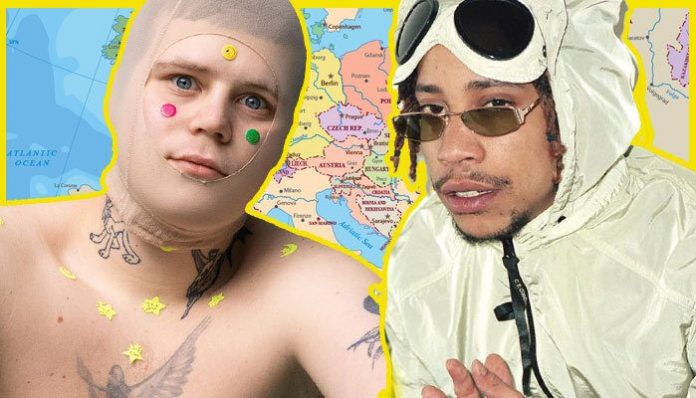 Motivation doesn’t always work. Positivity can be nice, but sometimes it just feels dishonest. And allowing yourself to be emotional is more than necessary. Speaking of emotions, ever wondered how emo rap sounds in Italian? Or French? Or Finnish? Creative and diverse, they, most importantly, are all letting you know that no matter how lonely or messed up you might feel, you’re not alone.

Check out these 10 European emo rappers who are currently shaping the landscape of the continent’s alternative.

Read more: Hershey’s is scaring up some new vampire-themed candy for Halloween

If you’re a fan of emo trap, chances are you’re already familiar with Jonatan Leandoer Håstad. Like many in this realm, he first emerged in the early 2010s as a teenage internet persona. Lo-fi beats, DIY production, themes of flexing and substance abuse…you know the drill. Unlike many, though, Yung Lean underwent a powerful evolution, transforming the image of a vaporwave rock star into an introspective and substantial artistic whole. Meanwhile, his music style has matured into a lush, clear and artfully produced sonic experience surrounded by lucid waves of ambiance and grounded by deep beats.

A tough girl winning in the game of sad boys, Lala &ce is here to show that emotional rap belongs to no gender. This French artist is freely exploring sexuality, idolizing Serena Williams and breaking genre stereotypes while delivering compositions that are innovative, versatile and multilayered yet super catchy.

If you’re into depressive imagery of pointless abundance, this Italian emo-trap anti-hero of grungy atmospheres and distorted guitar sounds deserves your full attention. A self-declared ex-metalhead, Piero Baldini combines guitar samples and recordings with trap beats and mysterious, jazzy atmospheres, while his vocals range from relaxed singing to breathy rapping to borderline screaming. Whether you like your emo entirely chill and romantic or passive-aggressively soul-crushing, Ketama126 has you covered.

Read more: These 10 emo rappers defied the haters to build their own scene

Storytelling, an essential part of both traditional rap and emo, is one of the key elements in Saske’s work. Fusing elements of rap, pop, traditional Greek music and trap, Odysseas Ntzimanis tells emotional stories with a bitter, punchy-punk attitude. Saske daringly explores both individual and social/political domains, which, as “Ksero Mana” or “N.ST.C.TO” masterfully show, aren’t that far apart.

Germany is currently experiencing a major emo-rap upheaval, thanks to artists such as Edo Saiya, Beyazz, Negatiiv OG and Lyran Dasz. In this dynamic universe, a new star was born. Sin Davis effortlessly switches between German and English in his laid-back flows while maneuvering between pop-rap and grunge tendencies. Referencing both Kanye West and Kurt Cobain, Sin Davis is either painfully pushing out the words or sluggishly mumbling across guitar fingerpicking patterns and groovy, hazy electronics.

Read more: Lil Lotus is rewriting the emo playbook and there are no rules

Emo 808s don’t have to be that dark, though, do they? Sullii, aka Josh Rogers, who’s also the frontman of U.K.’s post-hardcore outfit Crooks UK, paints emotional landscapes in pastel colors. His approach to the style translates as uncomplicated yet all-around beautiful, with dreamy sonic and lyrical poetry unfolding in subtle tones. Enhanced by crisp production, Sullii’s gentle vocals take flight across bright atmospheres and piano melodies. You’ll appreciate him if you’re into mellow acoustic vibes à la Horse Head or Steven Moses. Sullii is also someone to share with your friends who are into La Dispute.

Green Montana produces chill anthems for a broken yet resilient heart that has been through a lot and is still beating. The rapper is a melodic storyteller whose verses smoothly flow in French. Both in his tracks and visuals, this storytelling happens in hazy, expressive and immersive cinematic flashes—like a trailer for a sad yet not overly dramatic movie.

Read more: Here’s what Slayer would sound like mixed into an emo rap song

Fusing Finnish, English and Spanish is one of the trademarks of this rising Finland-based artist. Polished, sensual and full of memorable melodies and intricate R&B vibes, Le Fvbelos’ style stands out in the emotional crowd. Relatively fresh in the game, Le Fvbelos definitely has a bright future ahead.

Brokenhearted or a heartbreaker? Why not both? Meet Yung Hurn, aka Julian Sellmeister, probably the saddest Casanova from Austria. There’s lots of romance, some bromance, girls, money, parties and cars in his dreamy neon universe. Which is, in spite of all that, still pretty melancholic. Right in the middle of the conventional rap and new-wave emo duality stands a proud yet ultimately lonely rapper.

Ready for some daydreaming? Then put your headphones on and enter a state that’ll make you float with EXETER, the latest release by Swedish creative Benjamin Thage Dag Reichwald. The record, which pretty much crystalizes elements that make Bladee so interesting, will take you on a colorful, mind-bending trip. Just close your eyes and observe how random glitchy droplets of sound fall in and out of place in his Tetris-like wonderland.