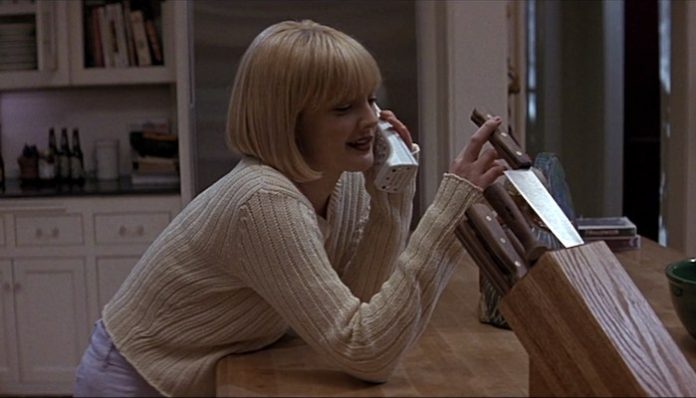 Numerous minute details go into making a great horror movie. Costume design, makeup, lighting and color schemes can all make or break the next spooky blockbuster, but even if all these factors are accounted for, there’s one thing that can push the film into legendary territory. Admit it: It’s the blood, gore, screaming and slicing that everyone remembers. While not all classic thrillers require brutal death scenes to be enjoyable, there’s no denying gruesome, gory fun reigns supreme come Halloween. Here are 10 most memorable horror movie deaths that can’t be forgotten as the holiday approaches.

No horror movie could get away with killing off their high-profile star right at the beginning of the film these days, but the original Scream went ahead and gutted Drew Barrymore in the intro scene. The mettle required for the bold death makes it iconic within itself, but the classic gore, brutal execution and painfully short distance to rescue make it a go-to for aspiring filmmakers.

Many horror films use jump scares as a crutch, but the element of surprise can still be used to instill fear without selling out. A prime example is the heartbreaking death of Danny Torrance’s psychic connection in The Shining, Dick Hallorann. The cinematography in the Stephen King adaptation makes the eerie hall of the Overlook feel miles long, causing Hallorann’s slow walk to an axe death all the more suspenseful.

More blood doesn’t automatically make a better movie death, but the parasitic demise of Thomas Kane in Alien lends itself to a bloody mess. The film does an exquisite job of lulling the audience into a false sense of security after he “escapes” a facehugger’s grasp, but the good times don’t last much longer. A feel-good crew meal quickly turns horrific when a bout of coughing leads to a putrid alien spawn exploding out of Kane’s chest and thoroughly painting the crew a specific shade of crimson.

This scene from Psycho has been picked apart, referenced and praised to absolute death (no pun intended), but all the hype is well deserved. You simply can’t make a list of this nature without including it, if nothing else due to the immense relevance in pop culture. We’re confident horror fans of all levels could watch the shower scene on mute and still hear the iconic score. It’s just that memorable.

5. Curt Vaughan – Cabin In The Woods

Maybe we just don’t detect twists well, but Cabin In The Woods still stands as a premier film in the realm of mind-exploding circumstances. When Chris Hemsworth prepares his super-rad dirt bike jump to save the day, we were all pulling for him to provide the film a happy ending. Instead, he smashes against an artificial wall. Don’t worry, it doesn’t make you a bad person if you laughed.

Having a fear of clowns isn’t an uncommon occurrence among children, but having an entire generation suffering from coulrophobia was the true effect of the original It film. Tim Curry’s rendition may seem pretty PG in comparison to Bill Skarsgård’s chilling role as Pennywise, but the original paper boat scene is no slouch. Killing a child by way of sewer gutter sets a statement to start the film and causes us to avoid curb drains to this day.

There are more than enough gore-happy moments in the Saw series, but the first edition of the torture game effectively set the tone for the remainder of the gruesome series. While the torture devices are troubling enough as is, seeing Amanda Young dig through the guts of her paralyzed cellmate in search of her own salvation is a fitting summary for the other films as well. We’ll admit the devices are consistently creative yet hard to stomach, but why can’t we look away?

Rob Zombie’s follow-up to House Of 1000 Corpses may be less dark and eerie, but by no means does it make for a less vile experience. The Devil’s Rejects sees the Firefly family entertain themselves at a hotel while on the run, toying with a touring band in the most sinister of ways. After all, they’re just here to do the devil’s work.

Video game movies are rarely good, and Silent Hill sadly didn’t break the trend. However, at least the horror-game-turned-movie was good for some creepy imagery and creative executions. The brutal barbed wire death highlights the few positives of the film, even if it doesn’t salvage it as a whole. At least it was good for one insane death scene.

Just like our Saw entry, it was extremely difficult to highlight only one death from the Final Destination series. Pool vents, bathtubs and tanning beds are all great, but in our opinion, having your brains scrambled by a truck radiator fan is top tier. Feel free to argue, though. It just gives us a reason to watch the movies again.