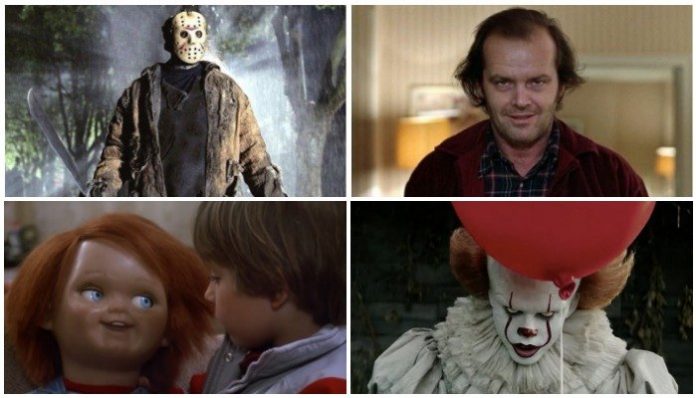 While Halloween means it’s time to carve pumpkins and go trick-or-treating, one of the best parts of the season is the horror movies. Nothing beats staying in on a cold night and binge-watching films such as Halloween, Child’s Play and more.

The genre is filled with so many films to choose from. It’s pretty much impossible to be able to watch all of your favorites before the end of October. Thankfully, we’ve created an essential list of 10 horror movies you must watch before the end of the month.

Read more: Which ‘The Nightmare Before Christmas’ character are you based on your music taste?

They’re classics for a reason, and nothing says tradition like cuddling up on the couch and getting scared with your loved ones. Find out which 10 essential horror films you need to watch before Halloween below.

The original Halloween film has to be included on this list not only for its name, but for Michael Myers. The Shape goes on a revenge-fueled killing spree after being locked away for the murder of his sister. It checks all the boxes for a Halloween horror flick and is widely credited with spawning the slasher subgenre, making it a must-see by the 31st.

A Nightmare On Elm St. also makes the list for its iconic killer—Freddy Krueger, who uses a knife-adorned glove to murder people in their dreams. It’s both psychological horror and gore, and it’s the perfect movie to revisit to get a few jumps in.

This 1996 cult horror film focuses on four teenage girls who practice witchcraft and curse anyone they don’t like. While a remake is currently in the works, it’s the perfect time to revisit the original to see four badass witches do some serious damage with their magic powers. Honestly, The Craft will probably inspire you to cast a spell or two before October ends.

Read more: The stories behind horror movies that are “based on a true story”

You need to get spooked by some supernatural occurrences before the end of the month, and the perfect way to do that is to watch this classic. The Exorcist is one of the most legendary horror films of all time that centers around a mother attempting to exorcise her possessed daughter. It’s chilling and will have you jumping out of your seat more than once, so add it to your list.

One of the most iconic Stephen King adaptations to date shows what can happen if you’re trapped in an isolated hotel filled with sinister energy. We see Jack Nicholson employ violence against his family in the psychological horror that will keep you up at night. If you’ve never seen The Shining, you need to make it a priority this year.

Speaking of Stephen King films, It is a must-see so you can have a few nightmares including Pennywise before November rolls around. The sequel to the 2017 adaptation just debuted in theaters in September, so it’s a great time for a rewatch and remember why it’s one of the most memorable horror stories of all time.

What’s Halloween without watching hockey mask-wearing murderer Jason kill a few people with his axe? Friday The 13th is a must-watch every fall, and while there are a few adaptations to choose from, you can never go wrong with the original.

Read more: 10 horror movies that are too cheesy not to laugh at

A Scream mask is nearly as synonymous with Halloween as a jack-o’-lantern at this point thanks to this film, so it’s only right to watch it once a year. The slasher series created a pop culture phenomenon when it dropped its first film, and you definitely should go back to it to get in the spooky spirit.

This supernatural film created a frenzy with its found-footage concept. In fact, it was highly debated over whether or not it was real when the movie debuted. Regardless of that, The Blair Witch Project is iconic because it at least seems real, and it’s something that could easily happen to you. This is the perfect choice to play on a movie night with friends when you really want everyone to scream.

Halloween isn’t complete without a haunted doll or two, and no doll is more prolific than Chucky. While this year we saw a reboot of Child’s Play, the original seems to be more fitting for the season, like a time-honored tradition. It’s getting cold anyway, so it’s the perfect time to stay inside and watch this ’80s slasher flick.