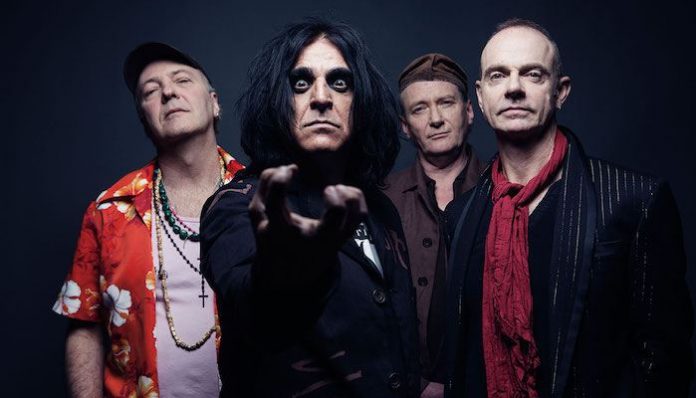 Today is the first day of the extensive Tool tour, beginning in Denver, Colorado. If you ever wanted that feeling of getting sonically lifted out of your seat by your shirt and thrown through a plate glass window, you should get there early to let proto-industrial, post-punk icons Killing Joke rough you up before Tool take the stage.

But don’t take our word for it. “Killing Joke have been a musical inspiration for me for many years and also have made a huge impact on my approach to drumming,” Tool’s Danny Carey tells AltPress. “The power of our bands together on this tour is going to tear people’s heads off. I can’t wait to unleash this on our fans.” Longtime Tool die-hards will remember that Carey is wearing a K-joke shirt on his band’s first cover of AP.

Killing Joke—frontman/synth op Jaz Coleman, guitarist Geordie Walker, bassist Martin “Youth” Glover and drummer Paul Ferguson—formed in 1978 in London’s Notting Hill area. Their first single, “Turn To Red,” was a brilliant DNA of dub reggae rhythms topped off with Walker’s captivating guitar tone (once described by Coleman as “a million orchestras on fire”) and Coleman’s commanding vocals and judicious use of electronics as atmosphere-enhancing elements. Their self-titled 1980 debut remains an iconic release that is remarkably stentorian.

Fifteen albums in and Killing Joke are still bringing the fear and the madness. You can hear the seeds of industrial rock, the jagged edges of the most sublime post-punk and the blueprint for the melodic yelling style that half a million bands have inadvertently copped from them. A list of their die-hard fans range from superstars (Metallica, Foo Fighters) to alt-rock icons (Helmet, Ministry, Nine Inch Nails) to straight-up metal dudes (Fear Factory, Prong). You don’t influence that diverse a pool of great bands by staying in one place.

So here’s a quick primer of assorted K-joke highlights for you to swing your balled fists at the day. There’s a ton more quality stuff we had to pass on, as we suspect the comments will remind you. But if you’re going to see Tool this month, don’t be lame and show up late: Killing Joke have been packing sonic heat for more decades than most of the bands on your device.

It’s probably the best place to start, as all of the band’s signifiers are in place here. Ferguson’s tribal drumming is relentless and punishing, and Walker and Coleman keep the urgency in the peak zone. From their legendary self-titled debut album, this one was covered by Metallica on their Garage Days Re-Revisited EP, a move that shocked a good amount of alt-rock/post-punk snobs back in the day.

Another track from the debut album, this track epitomizes the term “death disco” in a way that no other band can. You could flail around on a dance floor to it, or it could be the soundtrack for you and a baseball bat delivering some revenge on someone who harmed a loved one. Did LCD Soundsystem rip off the central riff for “Losing My Edge”?

From the band’s second album, 1981’s What’s THIS For…!, the cascading tom-toms and that razor-wire guitar sound appealed to both mohawked punks and sullen goths. Historical note: In the late ’80s, there was a  Birmingham, UK-based outfit that took this title for a band name, prior to changing it to Godflesh.

Also from What’s THIS For…!, here’s a perfect example of synthesizers as atmospheric sound design adding a great sense of menace and buoyed by Coleman’s sinister lyrics (“Butcher the womb and expect her to bear”) about man ruining the Earth. That low-end synth-pulsing is godlike.

From the band’s third album, Revelations, this attack on the ugly politics and soulless machinations of the music industry further cements Coleman’s disgust.

A crucial point in K-joke’s history was Coleman’s fascination with the occult, which prompted him to decamp to Iceland to purportedly escape the impending apocalypse. This track from 1983’s Fire Dances features lyrics that portend nuclear cataclysm (“Leave it all behind/I saw the cities come and go/And then I saw beyond”), while Ferguson’s drumming is probably why the song is titled accordingly. Of historical note, this was the first album where bassist Glover was replaced by Paul Raven. (Raven also appeared with Ministry, Prong and Pigface, among other acts before his passing in 2007.)

By their fifth album, Coleman was singing more melodically, but the urgency never lets up. Walker’s liquid feedback guitar solo is nothing short of genius. This writer will fight you.

Most famous for the great video with Coleman as a lying politician and Walker portraying coke-dealing auto-designer John DeLorean, this pointed attack on the greedier aspects of the human condition is positively eternal, regardless of the titular decade. Some folks think Nirvana lifted the riff for “Come As You Are,” but it’s more of a tribute than a heist.

1986’s Brighter Than A Thousand Suns was probably the most commercial thing they ever did, but it still sounds pretty tense for people who loved, say, “She Blinded Me With Science.” This track is mentioned here for educational purposes; the real burner on this LP is “Chessboards.”

For 1990’s Extremities, Dirt And Various Repressed Emotions, Coleman, Walker and Raven were joined by drummer Martin Atkins (Public Image Ltd, Ministry, Pigface) and became supercharged sonically and lyrically (“Do you grovel to your master?” Coleman seethes. “Do you beg like a dog?”). After a number of creative missteps and music industry travails, this seemed like a proper return to form. Dig that stalking feedback at the end.

1994 found Atkins and Raven out and Youth (by then an established record producer) returning to the fold to record Pandemonium. While a lot of the electronic-techno-dance rock music happening at the time sounded like wallpaper to abuse asthma inhalers to, K-joke’s take on the idiom was positively corrosive. This sequencer and pedal abuse rave-up from Pandemonium is completely relentless in its power.

The band’s second self-titled album (2003) brought along a whole bunch of surprises. Coleman, Walker and Youth were assisted by Gang Of Four guitar avatar Andy Gill in the producer’s chair. When System Of A Down’s John Dolmayan was unavailable to play on the sessions, some guy named Dave Grohl was more than stoked to sit behind the drums. Now hit the play button on “Asteroid” and brace yourself. However cranked you have it, you’re still not playing it loud enough.

Read more: Tool frontman says Justin Bieber criticism “has nothing to do with him”

Having returned in 2010 with all the original members of the band intact, Killing Joke proceeded to remind folks who drafted all those blueprints countless bands have been copying from for the last 30 years. Coleman’s treatise on governments and the power struggles of the oppressed (“And you’ll never ever get to see heaven”) are shored up with murderous riffage. On a historical side, Absolute Dissent was released with a limited-edition bonus CD of bands covering and/or remixing KJ tracks. Those who know history are more than elated to repeat it…

Taken from the band’s most recent release, 2015’s Pylon, the album’s centerpiece is a propulsive fantasy on the death of digital living. “Misery lies at the heart of control,” Coleman intones as the band back him at rapid heart-rate velocity. And that’s just the opening track. Who else keeps it this manic 40 years in?