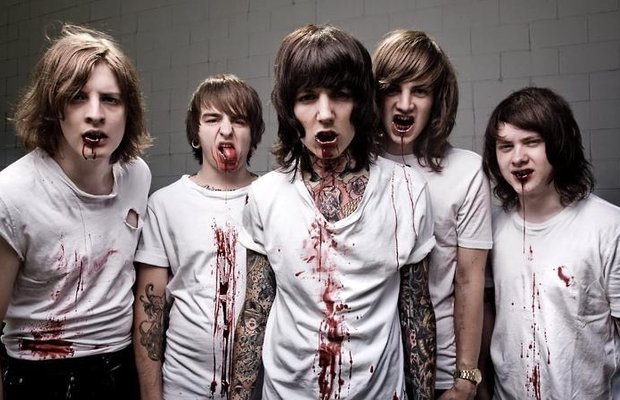 The true golden era of metalcore can—and will—be debated until the end of time, but the years between 2006 and 2011 were a notable period for our scene. Heavy music progressed into something that resonated with so many people. Aggressive verses, soaring choruses and, of course, outrageous, scene-shattering breakdowns ruled our speakers.

It’s hard to believe that period was already more than a decade ago, so we’ve compiled a list of tracks that will bring you back to an incredibly exciting time in our scene.

To many, Woe, Is Me ended when vocalists Tyler Carter and Michael Bohn exited. Taken from their debut full-length, Number[s], “[&] Delinquents” is a seamless melding of whimsical post-hardcore and destructive metalcore.

Before Beau Bokan began steering the ship for blessthefall, current Escape The Fate frontman Craig Mabbitt served as their vocalist. BTF released one album with Mabbitt: 2007’s His Last Walk. “Guys Like You Make Us Look Bad” shows just how different the band’s history could’ve turned out.

The Devil Wears Prada have become a staple not only in our scene, but in heavy music as a whole. In 2007, they made their first notable waves with Plagues, a monstrous LP of dynamic, electrified metalcore. “Hey John, What’s Your Name Again” has evolved into one of the band’s classic tracks, and rightfully so—it rips just as hard today as it did 12 years ago.

Read more: Scarlett O’Hara have returned to bring the metalcore party to 20ninescene

Until recently, Scarlett O’Hara were just a short-lived Rise Records band, but now they have a more straightforward metalcore sound. In 2010, SO’H offered a sense of melody alongside their maelstrom—a trait that could’ve propelled them well beyond their genre counterparts.

Confide’s cover of the Postal Service’s “Such Great Heights” was a bonus track on Tragic Hero’s reissue of Shout The Truth, but it quickly became the band’s most well-known song. Naturally, the next step was for them to couple the bangin’ track with an aggressive, heart-pounding music video—and that’s exactly what they did.

Bullet For My Valentine – “Waking The Demon”

Say what you will, but Bullet For My Valentine are largely responsible for bringing metalcore to mainstream markets. We both know you can sing along to “Tears Don’t Fall” and “Hearts Burst Into Fire” word-for-word.

Read more: 12 albums that formed metalcore in the early 2000s

Drop Dead, Gorgeous breathed fresh air into a scene that was quickly becoming dangerously stagnant. “Dressed For Friends Requests” provides the listener with a look into what genuine, passionate musicianship entails.

For The Fallen Dreams – “The Big Empty”

“The Big Empty” was released by For The Fallen Dreams when former vocalist Dylan Richter fronted the band. Whereas original (and current) frontman Chad Ruhlig offers an undeniably heavy aura, Richter provided a hint of melody that serves as their ultimate separator.

Read more: 10 heavy songs to get you through your heavy days

Greeley Estates aided the aforementioned blessthefall in signing to Science Records, a now-defunct subsidiary of Warner. In 2008, the band released their studio album, Go West Young Man, Let The Evil Go East, which featured “Blue Morning”—a track that has since become a classic among fans.

Iwrestledabearonce have always been portrayed as a fish out of water—that’s the point. They’ve always done whatever they want when it comes to the structure of their music. Sure, they’re far more progressive than your average metalcore band, but that isn’t going to stop you from losing your mind when the breakdown in “Tastes Like Kevin Bacon” drops.

I See Stars – “The Common Hours”

At one time, I See Stars brought balance to the force—or something like that. When metalcore fully embraced the electronic revolution, it had many adversaries. With their first and third LPs, I See Stars bridged the gap between electronic metalcore and genuine reputability among bands and fans alike.

Bring Me The Horizon – “The Sadness Will Never End”

With Bring Me The Horizon’s newfound status and musical tendencies, their metalcore juggernaut Suicide Season has all but been forgotten. While it was “Chelsea Smile” that really propelled the effort, “The Sadness Will Never End” served as a prequel to the band’s metalcore masterpiece, There Is A Hell, Believe Me I’ve Seen It. There Is A Heaven, Let’s Keep It A Secret.

It’s okay, you can admit you had this Attila song on repeat in the summer of ’09.

What was your favorite metalcore in the golden age? Let us know in the comments below.