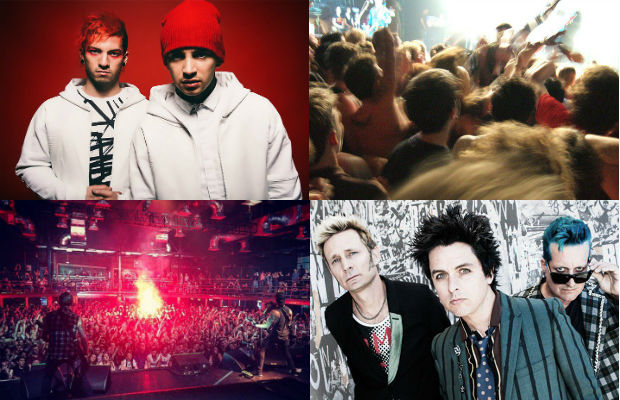 There is no such thing as a “traditional” mosh pit, but these heavy concert staples sometimes go to extremes.

Here are 11 mosh pits that have been remembered for their ridiculousness, tragedy or danger.

In his video for “Party Weekend,” Carrasco can be seen surfing on a sea of hands. Although he didn’t invent the mosh pit as we know it (it’s hard to say who did), he is believed to be the first musician to crowdsurf in a music video.

At this famously messy show, audience members threw clumps of mud onstage, and they can be seen whizzing by Green Day singer Billie Joe Armstrong as he sings.

In 2016, the Las Vegas stop for Warped Tour featured a swimming pool stage. In the center of the pool, audience members formed a circle pit (or a whirlpool?) while dancing to Knuckle Puck’s set.

twenty one pilots have been pushing the limits of mosh pit performances ever since they started. Their most famous move is getting drummer Josh Dun to play the drums while crowd surfing across the audience on a large platform.

Not all of mosh pit history is pretty. In 1996, a girl at a Smashing Pumpkins show in Dublin, Ireland, was killed after she suffered a heart attack from being pushed too hard in the pit. The band also took a stance against mosh pits following the casualty. This instance marked the first mosh pit-caused death.

Iggy Azalea was out there in the twerk pit paying off student loans, covering rent, refunding ticket costs and handing out free Uber rides …💸 pic.twitter.com/8fv6QxPRbE

Iggy Azalea may fall into the mainstream realm, but she’s been known to give a shout-out to the alt-world. At the beginning of the year, the singer came under fire for donning that Cradle Of Filth shirt, but it clearly didn’t deter her from her metal interest. As a result, she gave the mosh pit a revamp with the twerk pit. It all went down in July during the rapper’s two special, one-night only gigs in Los Angeles and New York City. There, she placed a yellow circle on the floor labeled “twerk pit” to encourage fans to let loose and even joined them herself to make it rain.

7. DevilDriver attempts to create a world record for the biggest circle pit

At their 2007 Download performance, metal band DevilDriver reportedly got 25,000 fans to create a circle pit in front of the stage. However, their record was rejected by Guinness World Records because it is impossible to definitively measure the size of a mosh pit, since it’s not clear where the moshing begins or ends.

When Boy Hits Car frontman Cregg Rondell climbed up the lighting rig at one of his shows, he didn’t initially plan on jumping into the crowd. But when he got stuck on top of a speaker, he leapt into the audience from a height of 68 feet.

With the help of a 360-degree camera and YouTube, fans can get an inside look at the intense wall of death mosh pit that happened at Heaven Shall Burn’s set at Resurrection Fest in 2016. The future is now.

In what might be the nerdiest discovery of mosh pit culture, Cornell scientists discovered that moshers behave like the molecules in a gas, moving and bumping into each other at high speeds. This research has helped with disaster planning, and also mosh pit preparation.

The same guy kept appearing at Lolla sets in this year, and members of the audience around him lifted his chair to push him towards the front of the crowd.

12. Fans mosh around a fire at a Bullet For My Valentine show

Is this something that you could call a fire pit? Not sure. But it created utter insanity (and huge amounts of danger) when Bullet For My Valentine fans started a bonfire at an indoor Russian show and started dancing around it.

No one has ever had more fun in a mosh pit than Shaq. The athlete threw down during DJ Kill The Noise’s set at Tomorrowland in Belgium in July. This wasn’t the first or last time the EDM fan has hit the pit, returning to do the same at an Electric Zoo after party in August.

What’s the strangest thing you’ve ever seen at a show? Here’s a new contender: A Chelsea Grin fan went into the mosh pit with a bowl of Lucky Charms. It all went down during Warped Tour’s final cross-country run at the Denver stop in 2018.

Meanwhile at @LiveAtFirefly, a silent disco mosh pit has been spotted in the wild during Emo Nite LA's takeover. 🤣 | 📹: @EmoNiteLA pic.twitter.com/rT6eZIrtiY

Emo Nite LA held their very first silent disco complete with a silent mosh pit at Firefly Music Festival in July. Music fans apparently rocked out with their headphones blasting A Day To Remember’s “The Downfall Of Us All.”

What is the most ridiculous mosh pit you’ve encountered? Let us know in the comments below.