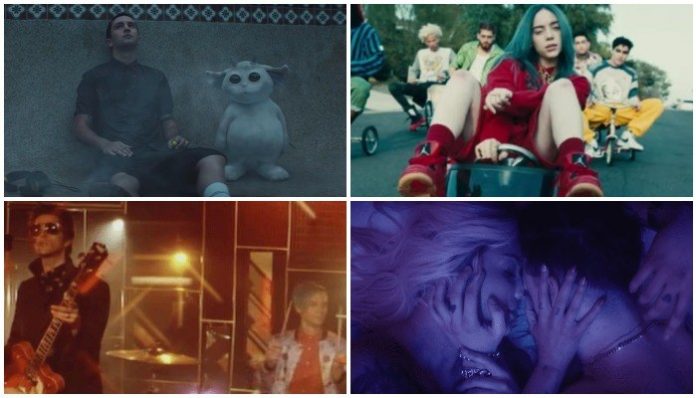 We’re deep into 2019, and it’s already been a big year in music. From collaborations between some of our favorite artists to sick new tracks from well-known names as well as rising supergroups, the music videos keep rolling in. The list can go on, but we’re taking a look back on the past six months to dwell on some of the best visuals that made their debut this year.

Even though we still have half a year left, here’s 20 of the best music videos of 2019 so far.

The Driver Era dropped their music video for “LOW” months after its first release, but that doesn’t mean it didn’t kick ass (literally). The brother duo don skeleton masks and wreak havoc as they rob a bank before the situation takes an unexpected turn, and they book it out of there. Still, it doesn’t stop them from having a good time.

2. While She Sleeps ⁠— “The Guilty Party”

While She Sleeps released the music video for the third single off SO WHAT? all the way back in February. The dark color schemes and wilderness perfectly complement the beginning vocalizations as well as give the visual a haunting feeling throughout its duration. What truly makes the video unique is the Ukranian translation beneath it, which made a few fans question why exactly it was there.

Emarosa tell the story of two teens who are navigating the challenges of high school. Set like a fairytale, the young warriors must win each battle if they want to make it out of the school alive, and they end up duking it out with a janitor, locker room bullies and evil teachers. The track matches the video perfectly as every time the protagonists fall, they get up and never quit no matter who they face.

Halsey and YUNGBLUD had fans wait a week for a video after the initial release of “11 Minutes,” but man was it worth it. A touching tale of loss and the stages of grief took place as the Englishman continuously tried to save the alt-pop singer, but to no avail. They share a dynamic energy on screen that makes your heart swell as much as their voices.

Giving their take on the “digital revolution,” Crown The Empire delivered a striking video to accompany one of their latest singles, “Sudden Sky.” With the help of a green screen and even getting down and dirty themselves, the band make the real and virtual worlds one.

Panic! At The Disco shared their video for “Dancing’s Not A Crime” in mid-March. The video follows The Amazing Beebo, Brendon Urie’s loveable alter ego, and his antics throughout a day on tour. From greeting fans to flying in the air with a piano, it makes you wonder how much a puppet can really do. It’s not all about Beebo, though. The shots alternate between him and Urie as the singer dances and performs onstage.

Read more: 20 music videos you won’t believe were filmed in the same place

With a little help from Fall Out Boy, Lil Peep and ILoveMakonnen’s “I’ve Been Waiting” was finally brought to life. The video was a tribute to the late rapper and, according to FOB, acted as a look into what his world may have been like. A piece of art in and of itself, the viewer is taken on a journey through a fantasy land filled with sweet purples and flying creatures.

We get a blast from the past with I DONT KNOW HOW BUT THEY FOUND ME’s video for “Choke.” According to the description, it was supposed to be used on Pop Time Live, but it was never aired “due to the band’s refusal to properly pantomime their own song.” Whatever the case, we’re glad the “unaired clip” was made public.

Billie Eilish took a break from her dark-colored videos with the release of “bad guy.” The track begins in real Eilish fashion as she breaks through a wall and hands her Invisalign to someone who is coincidentally standing there. An array of bright colors were used, but that didn’t take away from how unsettling some shots were, such as when the 17-year-old is bent backward or the ending at the time change. But would it really be an Eilish video without a weird factor?

It doesn’t need to be October in order to start creeping everyone out. Motionless In White prove that point perfectly with their music video for “Disguise.” A demon-esque creature is seen screaming, at one point getting a little too close for comfort with lead vocalist Chris Motionless. One thing is certain: That monster is the stuff of nightmares.

Wallows throw it down in their video for “Scrawny,” showing that the little guy can be just as tough as the big guy. After lead vocalist Dylan Minnette (13 Reasons Why) enters the ring, the outcome of the fight doesn’t look like it will end in his favor as he’s given a black eye and a bloody nose. Not to fear, though: He’s not ready to give up and may just come out victorious.

Supergroup Simple Creatures (All Time Low’s Alex Gaskarth and blink-182’s Mark Hoppus) also delve into the realm of spook, but in a more lighthearted manner. The two artists are charged with the security of a morgue, but they’re too distracted to see what’s going on through the cameras. Corpses get up to run and dance, and the guys are completely oblivious. While the “Adrenaline” theme can be somewhat comedic, there’s also a story of an undead love unraveling.

twenty one pilots introduced us to a lovely little critter in their music video for “Chlorine” (and instantly launched a thousand theories). Ned is a shy, small thing, afraid to take the plunge into the shallow depths of a pool. Thanks to Tyler Joseph and Josh Dun though, the critter is able to swim happily toward the end and even undergoes a small transformation.

Bring Me The Horizon began the year running. In early January, they shared “medicine” with its corresponding purely CGI video. The visual can take a few moments to adapt to with strange imagery such as flailing bodies and gnashing teeth. Despite that, it’s captivating enough for repeat viewings just to wrap your head around everything going on.

Read more: Bring Me The Horizon are already thinking about their next album

Not only did Slipknot drop a single from their upcoming album, but they also revealed their new masks in the video for “Unsainted.” Each member is featured in headshots as they look menacingly into the camera and also appear to be a part of a ritual. A new era is beginning, and the band are making sure everyone knows.

A collab between Poppy and FEVER 333 wasn’t something we ever thought we’d witness, but here we are. The “Scary Mask” video is pretty insane, but it manages to capture the essence of both the pop singer and the rock band. Fear seems to be a prevalent theme this year, or at least the creation of it. For example, Poppy wears a mask that you wouldn’t want to see on anyone at night.

Set It Off dropped their video for “Dancing With The Devil” in the beginning of February. The band are enshrouded in their signature blue while in a lab trying to figure out what’s on at the other side of a plastic wall. Though it’s not as intricate as previous videos such as “Why Worry” and “Killer In The Mirror,” the simplicity works.

5 Seconds Of Summer show off their individual artistry in the music video for the Nine Inch Nails-inspired track, “Easier.” Shots alternate between the members in seas of blue or blood orange as they perform chained up in a cave or drowning in a pool of water. Director Grant Singer says the video was inspired by “the idea of rebirth and the four elements: earth, air, fire and water,” a concept which was executed flawlessly while still capturing the essence of the track.

Read more: Michael Clifford on “the best guitar that [he’s] ever played”

Mothers are extremely important and ultimately in charge, which Judah & The Lion are reminded of in their visual for “Don’t Mess With My Mama.” The video features the band’s mothers and grandmothers as they take over the creation of the video. Not only are they seen directing, but they’re also active participants on screen breaking things and playing the group’s instruments. You won’t catch us messing with their mamas.

Dance Gavin Dance take a trip to a small town in their cinematic music video for “Head Hunter.” Tilian Pearson is set on the demise of Jon Mess, first shooting him point blank in the forehead. When that doesn’t work, he’s caught in the mix of gunfire. It looks like a normal Wild West shootout until someone breaks out the plasma guns. Even though it’s a bit weird, the video keeps your attention until Pearson rides out of town in his car.