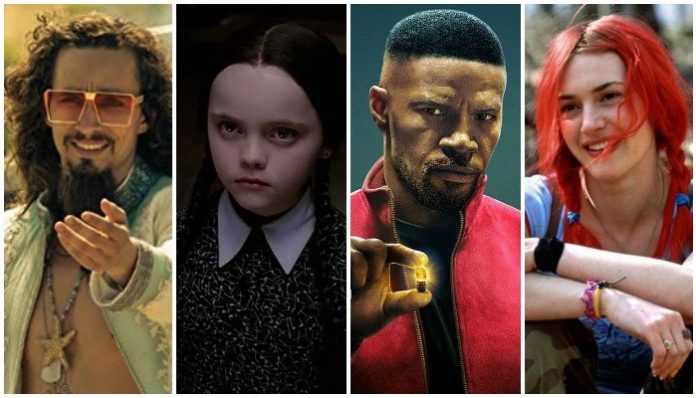 While the state of the world continues to be in disarray, it feels like the only thing we can truly rely on is Netflix‘s supply of binge-worthy material. It’s also a new month, which means the streaming service has unveiled a fresh list of titles arriving on the platform.

A new month means new things to add to our watch list, and to help you out, we’ve rounded up 10 new titles on Netflix that you need to watch this month. From TV shows to movies, you won’t want to miss these gems. You can check those out below.

We’re including this in case you somehow haven’t binge-watched the entire second season over the weekend. The new season of The Umbrella Academy, which is based on Gerard Way and Gabriel Bá’s graphic novel of the same name, dropped July 31. The Hargreeves are back, picking up right where they left off: They avoided the apocalypse by mere seconds. However, now they’re stuck with facing the consequences of their actions.

This Netflix action film starring Machine Gun Kelly, Jamie Foxx and Joseph Gordon-Levitt drops Aug. 14, and that acting roster alone should be enough to convince you to watch it. Project Power follows a former soldier, a teenage dealer and a cop going on a hunt around New Orleans to find the source behind a new pill they’ve discovered, which gives users temporary superpowers.

There are so many renditions of The Addams Family, but the original 1991 film is one of the best. While the TV series debuted in the ’60s, the film brought us even closer to the creepiest family to ever exist. If you’re in need of something to watch to just take your mind off of something, this is definitely a good film to turn to.

Eternal Sunshine Of The Spotless Mind (2004)

Eternal Sunshine Of The Spotless Mind will make you cry, whether it’s your first time seeing it or you’ve seen it a million times. The story is about an estranged couple (Kate Winslet and Jim Carrey) who decides to go through the process of completely erasing one another from their own memories, which becomes complicated due to the nature of love itself. This film will make you reflect on the way you perceive relationships based on memories and is definitely a good one to put on if you feel like crying.

In The Dark’s second season dropped at the end of July, but if you haven’t watched this The CW show, spend time this month binge-watching both seasons. The story is about Murphy (Perry Mattfeld), who’s blind, attempting to solve the murder of one of her friends. After some shocking truths were revealed at the end of season 1, Murphy is determined to get justice for her friend, which is easier said than done.

The Scary Movie films are always a classic to return to when you just need a laugh. The fifth film hits the streaming platform Aug. 12. While recurring series stars Anna Faris and Regina Hall are noticeably absent from the film, it still pokes fun at a lot of throwback pop culture moments that still make us laugh.

While this film isn’t the scariest movie ever made, the plot itself hits a little close to home. The film is about three best friends who take a road trip to a metal concert. While at the show, they bond with some musicians and decide to hang out after. What seems harmless turns into an event straight from hell and will keep you on your toes throughout the entire movie. If you’re in the mood to watch a horror film you’ve never seen before, check this out when it drops Aug. 8.

Netflix’s new original series is a comedy that follows two twin sisters who are navigating teenage life alongside being professional bounty hunters. The trailer gives us Buffy The Vampire Slayer vibes, and after seeing the trailer alone, we’re already in love with the two main characters. When this drops Aug. 14, make sure you don’t miss it.

I Am A Killer: Released

On Aug. 28, Netflix will release a spinoff of its popular show I Am A Killer, which follows the story of a convict who admitted to and was convicted of cold-blooded murder and is now released on parole in Texas. If you love crime documentaries, you will be glued to this miniseries that shows what it’s like for a murderer to be released back into society.

Jurassic Park, Jurassic Park III and The Lost World: Jurassic Park are all available on Netflix for those superfans of the series. That means it’s the perfect time to have a movie marathon at home, complete with snacks and whatever dinosaur decor you might have on hand.