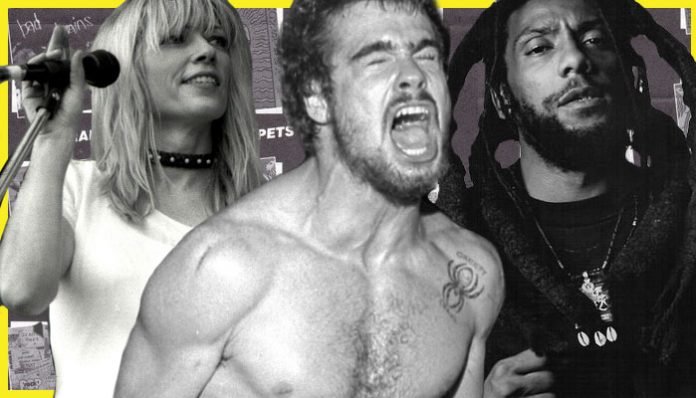 These 10 albums represent SST Records’ greatest achievements. Greg Ginn began Solid State Tuners at age 12 as a mail-order electronics business still thriving in his early adulthood. In 1978, when pioneering California indie label Bomp! Records dragged its heels releasing Nervous Breakdown, the debut EP from his punk band Black Flag, Ginn figured he could apply the business acumen he’d learned selling radio parts to releasing records. He knew something about printing, having done his catalogs himself. He then looked up “record pressing plants” in the phone book and went from there.

SST Records became America’s most influential independent punk label from 1981 to 1986. You unquestioningly bought anything they released. Both their bands and records were the most intense music the U.S. underground offered at that moment. Black Flag, Hüsker Dü, Minutemen, Sonic Youth, Soundgarden, Dinosaur Jr.—all these acts were introduced to the world by SST.

But you’d be hard-pressed to identify an “SST sound.”  If anything, these bands shared an abiding aesthetic. House producer/engineer Spot gave every SST release a raw, bare-bones sound. Sleeve art usually displayed the jarring pen-and-ink cartoons of Ginn’s brother, Raymond Pettibon. Every act shared this ultra-thrifty D.I.Y. ethic the Minutemen called “jamming econo.” Studio time was booked after midnight, when rates were their lowest. All songs were practiced hard beforehand, then recorded on used tape in the order they’d appear on the album to avoid paying for tape editing. On tour, bands would be their own roadie and driver, playing every night. Post-show accommodations were generally an audience member’s floor.

Ultimately, SST preached fierce independence. The label wasn’t interested in any band’s commercial prospects or “hit” potential. They wanted to know that your music was the most ferocious expression possible, and you were willing to work hard and be fiercely devoted to your art. This feels rare, nowadays.

All that said, here are the 10 greatest SST Records full-lengths.

Read more: Here are 10 of the most influential bands in hardcore

Black Flag died for your sins. They didn’t play shows—they played riots. Hounded by the police and eating dog food on endless Bataan Death March tours across America, they built the indie-punk touring circuit. Their 1981 debut LP,  was not the Waring blender thrash that eventually characterized hardcore. Rather, Black Flag defined hardcore: strict, rigorous. Henry Rollins shouted defiant anthems such as “Rise Above” and the title track until he was hoarse, as Ginn twisted his guitar into atonal shapes. Damaged transcends time and space.

Minneapolis’ contribution to hardcore was one of SST’s first signings from outside Southern California. The blitzkrieg trio were also tiring of the warp-speed thrash that was their signature. Now they’d ambitiously recorded a two-record concept album, tracking and mixing in 85 hours straight at a cost of $3,200. The punk tunes, such as guitarist Bob Mould’s “Chartered Trips,” began jangling like Buzzcocks frying on crystal meth. Meanwhile, such decidedly non-punk touches as acoustic guitar snuck into tracks such as drummer Grant Hart’s “Never Talking To You Again.” Hüsker Dü were about to gaze past hardcore’s horizon and aim for the universe.

Minutemen – Double Nickels On The Dime

San Pedro’s econo-jamming trio were half-jokingly jealous Hüsker Dü got a double album. But because D. Boon, Mike Watt and George Hurley frequently lived to up their name with their brief song constructions, they cut 45 tracks, compared to Zen Arcade’s paltry 23. Minutemen, however, required two sessions plus a single-night mixdown. But they only spent $1,100 total. What emerged was tight, angular, funky rock (“Anxious Mo-Fo”), faux flamenco (“Cohesion”) or Anglicised conjunto (“Corona”), pile-driving punk (“Political Song For Michael Jackson To Sing”) and even a Van Halen cover (“Ain’t Talkin’ ’Bout Love”). Double Nickels was as adventurous as 1984 got.

Stains were four Mexican youths from East L.A.’s Boyle Heights neighborhood who accidentally invented the hardcore/metal crossover in 1983, at a time when Slayer and Metallica were still trying to figure out Iron Maiden riffs. Drummer Gilbert Berumen blames the hyperadrenalized tempos on the endless cups of coffee and doughnuts Spot fed him. Guitarist Robert Becerra abused his whammy bar like Ritchie Blackmore on a crack bender. Full of vehement riff-rock such as “Gang-Related Death” and “Quit The Human Race,” it’s easy to hear where Ginn got a few ideas. Really worth a reissue/remaster.

Phoenix’s Meat Puppets centered around brothers Curt (guitar/vocals) and Cris (bass/vocals) Kirkwood and drummer Derrick Bostrom. They began playing a twisted, gibbering punk marked by Curt’s strained warble of a voice. By their second album, their acid intake had likely quadrupled, rendering the Puppets more psychedelic. Yet, it also brought in this sun-damaged country on tracks such as “Magic Toy Missing” and “Lost” that was simply delightful. II became an ’80s underground staple LP, to the point where the Kirkwood brothers joined Nirvana for their MTV Unplugged episode to cover this record’s “Plateau,” “Oh, Me” and “Lake Of Fire.”

1984 was the year SST burst free from a punk straitjacket, expanding into other hard ’n’ loud turf. Black Flag grew their hair and went into metal territory on My War and Slip It In. But Saint Vitus introduced the world to what became known as doom metal. Black Flag had brought them on the road, and the four-piece taunted Mohican thrashers with what sounded like the second coming of Black Sabbath. From the opening blast of corrosive wah-noise commencing the record, Saint Vitus unleashed 35 minutes of the heaviest riffage known to man—total caveman rock. Earth’s axis permanently tilted.

Dicks – Kill From The Heart

The Dicks were the Austin punk scene’s greatest band, alongside the Big Boys. Ferocious, committed and aggressively leftist, they were fronted by Gary Floyd, a rotund, gay, cross-dressing communist with a potent blues howl. He was surrounded by three surly musicians who looked like hungover ex-cons on the lam. The roar producer Spot coaxed from them resembled Howlin’ Wolf drunkenly channeling the Sex Pistols, with an abrasive guitar sound and high-speed 12-bars such as “Anti-Klan (Part One)” and “Bourgeois Fascist Pig.” It should’ve included debut single, “Dicks Hate The Police.”

The opening track “Freak Scene” served notice that Massachusetts noise boys Dinosaur Jr. had grown even farther from their SST debut, You’re Living All Over Me. Cleanly produced, it was more melodic and more conventionally structured than previous releases. Yet, it still retained the overamped and Neil Young-meets-Sabbath distortion and J Mascis’ laconic vocals were their trademarks. It became the band’s first U.K. chart hit and signposted the rest of the album. With its noisy pop dichotomy and airtight songwriting front and center, Bug became a paradigm of alternative rock’s future.

Much the same can be said for NYC noisemakers Sonic Youth’s third full-length, their SST debut. One of the first SST releases to not feature a Spot production job, Martin Bisi sat behind the mixing desk, while Crucifucks drummer Steve Shelley began his long occupation of SY’s drum stool here. As Thurston Moore and Lee Ranaldo’s screwdrivers struck their oddly tuned guitars’ strings into shapes that alternately jangled and screamed, the band’s songwriting delved further into pop territory, still twisting all over the place. Some of the most effective vocals were bassist Kim Gordon’s, whispering to screaming through “Shadow Of A Doubt” and “Starpower.”

Bad Brains – I Against I

The D.C. Rastacore heroes’ sole studio release for SST began with typical high-speed thrash punk on the title track and “House Of Suffering.” But the production was notably cleaner and more commercial-sounding than even Ric Ocasek’s on Rock For Light. But notice producer Ron St. Germain’s previous credits: Ashford & Simpson, Peter Wolf, Adam Ant and Foreigner, among others. But tracks such as “Re-Ignition” go full metal, while “She’s Calling You” flashes Bad Brains’ funk past. Most impressive is “Sacred Love,” with H.R.’s vocals recorded in one take from a phone call from jail while the singer served a pot possession charge.