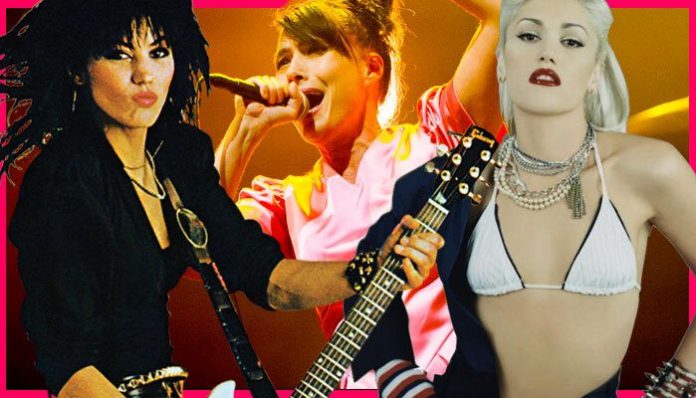 Since the inception of the alternative music scene, men have been at the forefront. Historically, they have determined who can participate and are allowed in their spaces, creating a “by men, for men” mentality. As a result, the “boys’ club” of the indie, punk and the alternative underground emerged. Since then, women have had to find a way to tear the front door off.

As the boys’ club continued to thrive in DIY venues and major punk venues such as CBGB, women started to dismantle the patriarchal structure of the alternative scene. While the riot grrrl movement straight-up blew the boys’ club out of the water, frontwomen have battled the male-dominated industry since it started. With more women creating alternative music now more than ever, look back at vocalists who successfully killed the boys’ club.

Born in Wynnewood, Pennsylvania, Joan Jett is a world-renowned singer, songwriter, composer and the epitome of women who rocked so hard, they killed the boys’ club. She started her musical career with the Runaways as a founding member. Once they disbanded, Jett went off to start her own solo project. As a result, she formed Joan Jett & The Blackhearts and went on to put out hit singles such as “I Love Rock ’N Roll” and “Bad Reputation.” Jett was known for subverting the expected gender norms of punk and rock ’n’ roll. Both her lyrics and performances were an unapologetic declaration that women belonged in alternative music.

Debbie Harry came to New York from New Jersey at the age of 20 in 1965. It wasn’t until 1974 that Blondie became a recurring act on the stages of Max’s Kansas City and CBGB. Harry achieved success in some of the most prominent alternative venues in the United States. However, it wasn’t until Blondie’s third album Parallel Lines in 1978 that they reached mainstream success with their mix of punk and pop. Harry performed as her authentic self and never fell into the expectation that she needed to be overtly sexy. She asserted herself as a frontwoman to remember, co-writing Blondie’s lyrics and breaking down barriers so more women could participate.

In the ’90s, no one was more subversive, outspoken, intense or talented as Courtney Love. Fronting Hole, Love was producing noisy music with imagery that writhed with anger. In fact, the band were so popular, their first album, Pretty On The Inside, outsold Nirvana’s Bleach at the time. Love and her band performed music that spoke to women’s raw lives and displayed it publicly for everyone to witness. Regardless of the controversy that comes with the name Courtney Love, she and Hole set the bar for the absolute power women could wield in alternative music and deserve the utmost respect for it.

Kathleen Hanna and Bikini Kill are the epitome of what it means to be a riot grrrl. They started the movement that spawned an entire generation of young feminists who proclaimed “enough is enough.” Bikini Kill formed in 1990 in Olympia, Washington and kick-started a booming feminist alternative underground where women came to perform. The riot grrrl movement provided a space for feminist ideas to grow among women who felt left out and needed to be heard. Hanna used her platform as a musician and lyricist to prompt society to pay attention to the frustration women felt socially, culturally and politically through music. In 2020, the resurgence of riot grrrls and last year’s reunion of Bikini Kill has made for a landscape that invites women to kill the 21st century’s boys’ club.

Born in Fullerton, California in 1969, Gwen Stefani began her musical destiny fronting No Doubt alongside her brother, Eric. By 1992, the band released their debut, where Stefani utilized her femininity and power to appeal to a mainstream audience. Her efforts proved successful once their third album, Tragic Kingdom, was released in 1995, and she became recognized as a powerhouse in alternative music. The singles “Don’t Speak” and “Just A Girl” frequently got played on the radio. The latter became a feminist anthem in which Stefani rejected the stereotypes that women were expected to adhere to. Ultimately, Stefani’s lyrical honesty made No Doubt an unforgettable band who rejected the ’90s patriarchy.

Born Marianne Joan Elliott-Said, Poly Styrene served as the frontwoman for British punk-rockers X-Ray Spex. She formed the band after calling upon fellow young punks to stick together and dismantle the unjust society they lived within through music. As a result, X-Ray Spex were created, and their critiques on capitalism hit the alternative underground by storm. No one had witnessed a woman sing so passionately about breaking the bondage that capitalism, patriarchy and political structure held on individuals worldwide. Their hit song “Oh Bondage! Up Yours!” remains an important song to any radical revolutionary looking to challenge the institutions that oppress them. On April 25, 2011, Styrene passed away from breast cancer, but her legacy lives on in the hearts of those who believe her band’s message still needs to be championed.

Kim Gordon was raised in Los Angeles until she returned to her home state of New York to pursue a career in the arts. In New York City, she became interested in lo-fi alternative music and went on to form Sonic Youth in 1981.The band utilized unorthodox guitar chords and an array of objects to create a mix of sounds. The result that made them one of the most influential bands in alternative music. As a frontwoman, Gordon was completely comfortable with being herself in a male-dominated world, a world that often made other women uncomfortable. She quickly became the idol of many young women, who admired her lyrics that confronted gender inequality in society. Gordon’s career was always evolving, and she continues to inspire people to this day.

Siouxsie Sioux – Siouxsie And The Banshees

Siouxsie And The Banshees formed in 1976 in London, with frontwoman Siouxsie Sioux leading the post-punk band into popularity. Sioux wrangled with men in the scene early on. Both her lyrics and sounds were working outside of the expected box of punk, which threatened the ’70s boys’ club. Regardless, she continued to push the bar and put out music that inspired women such as Love and FKA twigs. Sioux’s music challenged what the post-punk era could be for women and set the stage for genre-bending in alternative music.

While the riot grrrl movement was well underway, Polly Jean “PJ” Harvey began creating music that attracted a mixed audience in the underground scene. Her lyrics came from an intimate place, which told stories of women’s longing and desire. Because she didn’t overtly reject the male gaze at the same lengths as her peers, Harvey experienced sexism early on. Despite this, she never slowed down. She produced powerful songs about her experience as a woman with her enchanting and wide vocal range. Her work in alternative was groundbreaking to the future of pop music, and her avant-garde take won’t be forgotten.

Formed at the University Of Oregon in 1991, Bratmobile were a powerhouse within the riot grrrl movement. Frontwoman Allison Wolfe grew up in Olympia, Washington, and became a radical feminist early in her life. This influenced the lyrics and sounds of Bratmobile. Pat Shively, her mother, co-founded Olympia’s Eastside and Westside Women’s Health Clinic in 1981 and protestested against anti-abortion legislature. Wolfe often cites her mother as her muse and role model. The band performed with the anger of punk but with the color and energy of pop. While their songs featured the struggles of womanhood, “Cool Schmool” and “Girl Germs helped bring fun to the stage. Wolfe was one of the leading voices of the riot grrrls. She continues to play an active role in supporting both frontwomen and feminist activism today.