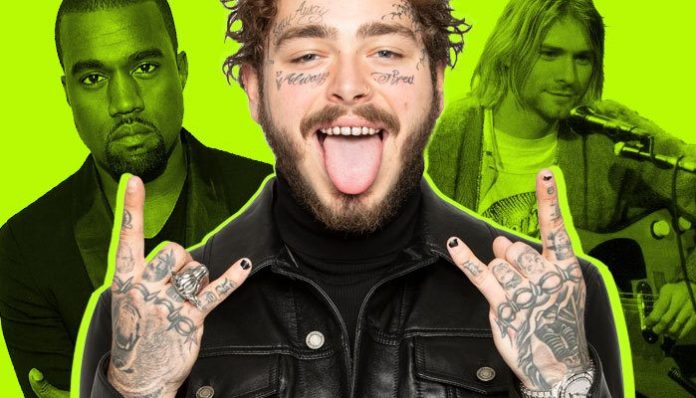 By now, we all either know, or need to accept, that Post Malone can do anything. Even though he’s one of the most popular rappers right now, he dabbles with everything, from collaborating with artists such as Ozzy Osbourne to working on projects with brands such as Crocs and Bud Light.

He’s larger than life, but just because he’s a mainstream artist doesn’t mean he can’t appreciate different genres of music. He’s a former scene kid who’s collaborated with major names in rock, rap and more. He’s also done tributes to music legends that prove he can sing just as well, if not better, than he can rap.

To prove that Post Malone is unstoppable, we’ve found 10 examples of times the rapper proved he can sing anything. Check those out below.

1. When he gave his all performing “Killing In The Name”

In 2016, Post Malone joined Royal Machines at Roxy Theatre in West Hollywood to cover Rage Against The Machine’s “Killing In The Name,” and they nailed it. In another life, the rapper definitely could’ve fronted a rebellious alternative band and given Zack de la Rocha a run for his money.

2. When he and Vic Mensa sang “Hey There Delilah”

if you're having a bad day, here's a video of post malone and vic mensa singing hey there delilah together 😭 pic.twitter.com/lQZTm6eIWx

In a series of strange events in 2017, these two rappers were straight-up chilling while belting out the Plain White T’s hit on a couch. Since then, we’ve only wanted to hear a full cover.

3. And when he sang Stray From The Path with Knocked Loose

Here's me and @PostMalone singing @strayfromdapath before his gig tonight in Nashville pic.twitter.com/zLIjSS6h9J

Post Malone has an unlikely friendship with Knocked Loose’s Bryan Garris, which led to an impromptu air guitar session to Stray From The Path. Even though he only sang the last line or two from the song, we could tell he’d kill a full cover, mostly from their energy.

4. When he covered Kanye West

The long list of things we didn’t know we needed includes this beautiful cover by Posty of Kanye West’s “Heartless” on acoustic guitar that completely transforms the song. The rapper took a rap song and made it sound like a ballad. Who does that?

5. When he perfected an acoustic version of “Basket Case”

Malone’s cover of “Basket Case” by Green Day is another amazing acoustic rendition that shows off his impressive vocals. Honestly, we’re in need of an album of him covering a variety of different songs on an acoustic guitar.

6. When he and twenty one pilots honored Oasis

These two powerhouse performers wowed the audience at Reading And Leeds last year with a spot-on cover of “Don’t Look Back In Anger” by Oasis. It’s not an exaggeration that the video of this cover gives us chills every time we watch it.

7. When he even sang Elvis Presley songs perfectly

In a total switch up, last year Posty proved he could even cover Elvis Presley with ease while dressing like him as well. During this one-night event, the rapper sang a ton of songs, including “Blue Suede Shoes” with Blake Shelton, fitting in perfectly with country artists as if that was his genre of choice.

8. When he performed with Red Hot Chili Peppers at the freaking Grammys

Let’s not forget when Posty performed “Dark Necessities” with Red Hot Chili Peppers at the 2019 Grammys. He harmonized so well with Anthony Kiedis that it looked like he was a part of the band. RHCP also didn’t do so bad performing some of Posty’s songs beforehand as well.

9. When he screamed Pantera in an impromptu performance

Oh, what we would do to go to one karaoke night with Post Malone. The rapper was seen at a bar in New York screaming the lyrics to “Walk” by Pantera, and it was completely on point.

10. When he gave an at-home Nirvana tribute with Travis Barker

Most recently, the rapper and Travis Barker teamed up for a Nirvana tribute livestream that raised over $2.5 million for the United Nations Foundation’s COVID-19 Solidarity Response Fund. He sang more than a dozen Nirvana songs as if they were his own. It’s no doubt that he honored the band in an amazing way that also helped those in need.