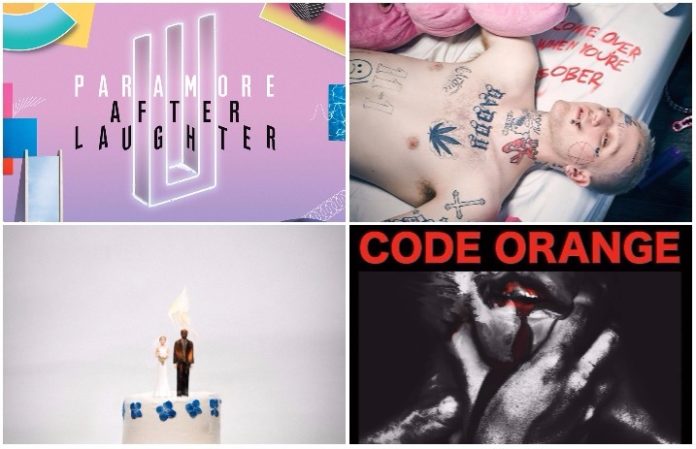 Do you have any idea how many records are released in any given year? That’s OK, neither do we. We do know that there are thousands of records that come out every year, from manufactured pop stars to local church choirs, and all of them are hoping to get your attention. So through all the noise, here’s what stood out. Check out our favorite albums from 2017.

Watch the video below and/or scroll down to see the full list:

“Fans of the band’s older albums will be pleasantly surprised with AFI (The Blood Album). The record embodies AFI’s ubiquitous dark sensibilities while embracing their punk foundations.” —Gen Handley

“All Time Low proved that their penchant for catchy hooks and can't-help-but-sing-along choruses are as strong as ever on Last Young Renegade.” —Maggie Dickman

Andrew McMahon In The Wilderness – Zombies On Broadway (Vanguard Records)

“Not only does the album overflow with stick-in-your-head hooks, but it also boasts contemporary production, from sleek digital programming to airy synthesizers, to go along with more traditional band-based instrumentation.” —Annie Zaleski

“Asking Alexandria should not be overlooked by longterm fans wishing for the old days to return—they might very well be pleasantly surprised.” —Taylor Markarian

“In•ter a•li•a isn’t about capturing a zeitgeist as much as it is about jumpstarting some urgency in a rock scene that desperately needs more wild abandon and psychic plasma.” —Jason Pettigrew

“Sonically, there’s something incredibly otherworldy and fantastical rooted in Phantom Anthem, making the album translate like an epic poem rather than a collection of songs.” —Natasha Van Duser

“Straight up? Avenged Sevenfold’s new album is compelling because the SoCal quintet unashamedly continue to embrace their larger-than-life arena-rock ambitions, while genuflecting at the altars of the gods of hard rock and metal before them—on their own terms.” —Jason Pettigrew

“Fail You Again has to follow the surprise success of 2016's Death Deserves A Name, and it does so with its production gains and hooks for days. Bitter basement anthems have never sounded this sweet.” —Brian Kraus