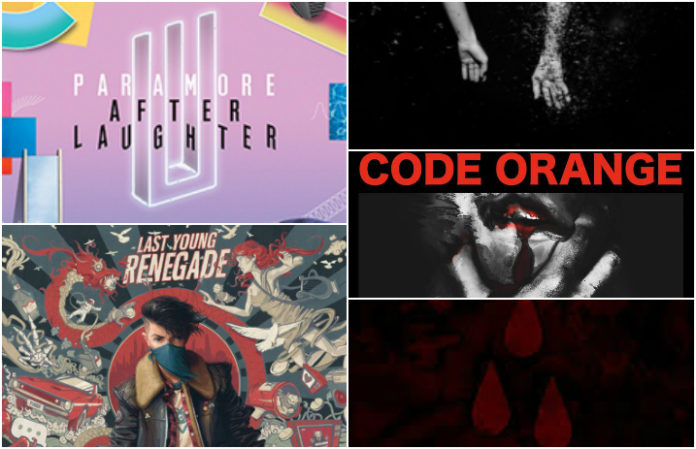 One part wiseguy, one part powerful drummer, 100 percent rock ’n’ effin’ roll. The team of Josh Scogin and Michael McClelland are schooling all the scenes via stentorian riffage, wild-ass noise, throat-shearing hollerin’ and arbitrary weirdness. Love them or hate them, just get off the damned fence, people! — Jason Pettigrew

AFI are 10 (yes, 10!) albums in and their latest release is very appropriately self-titled. AFI (The Blood Album) cohesively encompasses all of the things we have come to love about the band through the years. With enough grit to please fans of their hardcore era, polished New Wave elements and rock sensibilities, this album can’t be neatly summarized into any one genre. But that’s exactly why a quarter of a century into their career, AFI are still at the top of dark rock. — Rabab Al-Sharif

All Time Low have never really been an out-and-out pop-punk band, and on Last Young Renegade, they’ve finally fully realised their goal of becoming alt-pop icons. Alex, Jack, Zack and Rian have so much experience under their belts now, and it shows in both the quality of their songwriting, and the care that’s gone into the musical world-building they’ve done on this album. From the bangeriffic pop-rock of the title-track to the accomplished Tegan & Sara collaboration that is “Ground Control,” this is an album of seriously high quality. — Jake Richardson

Blackbear is one of the hardest working artists in recent memory. His latest full length, digital druglord, dropped on the exact same day as his side-project's full length, Mansionz. What proves Blackbear's work ethic even further is the sonic separation digital druglord exhibits from his previous works. His latest LP dives deeper into R&B roots all while still maintaining his sweeping vocal runs and high-energy trap beats. digital druglord is the R&B record of the year, and we're only six months into 2017. — Anthony Lauletta

Code Orange stormed 2017 with an industrial hardcore record that broke boundaries. Highly inventive, jarring and belligerent as well as reflective, FOREVER is going to stick in the revered hardcore cannon for sure. This band and their 2017 record are as ruthless and unfiltered as it gets. — Taylor Markarian

Creeper – Eternity In Your Arms

Eternity, In Your Arms, the debut full-length from Creeper was received with well-documented. Its effect that's not so easy to research is the culture this cinematic punk concept album created. Only one release in, Creeper's fans are meme-ing and recreating and worshipping this music, and it's looking like the band are soon to take over the world. If you've been sleeping on it, listen to this over-the-top album that flounces between speedy hardcore punk, alt-country and Bowie-inspired anthems to say you knew them when. — Cassie Whitt