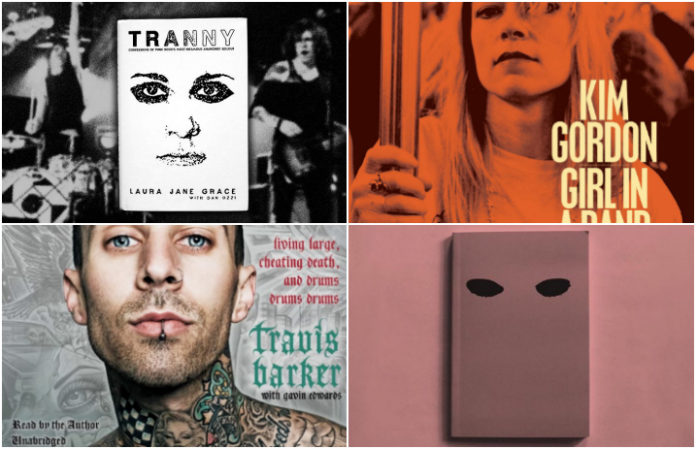 Need a book recommendation? Look no further than this list of books and memoirs by some of your favorite musicians.

Tranny: Confessions of Punk Rock's Most Infamous Anarchist Sellout by Laura Jane Grace (Against Me!) with Dan Ozzi

Today is the day. The book is out. Woah.

Laura Jane Grace's memoir is an incredible look at a woman's identity crisis within the scheme of one of punk rock's most important and beloved modern bands. It's characterized by an extreme bravery and supplemented by the detailed journals she kept throughout her life, making it a must-read for more than just fans of Against Me!.

Born to Run by Bruce Springsteen

Springsteen is known for his ability to use lyrics to tell a vivid story. It's no wonder that his recent autobiography—named after one of his most impressive and enduring songs—is gritty, philosophical and extremely personal. His poetic prose successfully tells his humble story, taking readers through the rise of one of the greatest musicians to ever live.

Sincerely, John the Ghost by John O'Callaghan (The Maine)

Released in April 2016, this book of poetry accompanied an EP of the same title comprised of six tracks recorded by O'Callaghan's solo side project. With poems that show the origin of the lyrics of several songs by the Maine, this book is a must-have for fans of the band.

I've been wanting to read this since it came out and I'm finally getting into it. Thanks @hashtagjuliagulia �� #currentlyreading #pattismith #justkids #summerreading #readinginbed #icon

This memoir documents the punk queen's famous relationship with photographer Robert Mapplethorpe. It's beautifully written and won the National Book Award for Nonfiction for a reason.

new book alert! �� looking forward to curling up with this and some tea this evening. #wilfrancis #williamcontrol #flowersandfilth

Francis' poetry in this book ranges from dark and borderline disturbing to joyful and loving, making for a beautifully dynamic assortment. Paired with art photography from Lisa Johnson—one of rock's finest photographers—this book contains a can't-miss stunning collection.