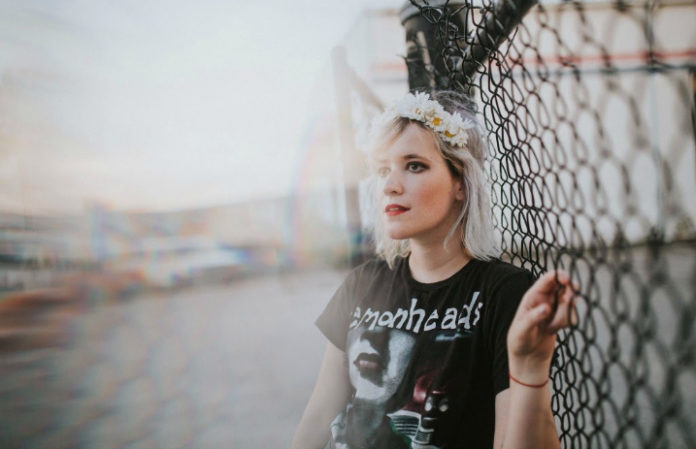 Best Ex’s Ice Cream Anti Social is an affair that’s truly as sweet as it sounds. The band released their debut single last month: “Girlfriend,” a bubblegum-laden punk track that is meant to be danced to, and the rest of the EP abides in the synthpop realm that is different — but not a far cry — from Mariel Loveland’s Candy Hearts days.

“With Candy Hearts, I felt like it was something that I kept doing because I didn’t know how to do anything else,” Loveland explains.

“We took about two years off from touring,” she continues. “During that time, I was writing a Candy Hearts record, and I was thinking to myself about how different I was… I let myself feel like the stakes were a lot higher than they actually were, and I didn’t want to move forward in my life and have that kind of negativity there, so I felt like if I got away from the name, maybe I’d be able to get away from those anxieties as well.”

With Best Ex, there is a new side of Loveland that we haven’t heard before. But it’s not like she’s started a brand new book — it’s more like she’s turned the page to a new chapter.

She explains that the “softer, singer songwriter-y sounds,” brought to life on tracks like “February 4th” and “Jellyfish,” are influenced by the softer side of the Lemonheads and the Weakerthans — both huge influences for Loveland during her Candy Hearts days, too. But those pop influences were inspired by the likes of CHVRCHES and Carly Rae Jepsen, muses that have proven to be a perfect fit for Loveland.

The opening track, “Girlfriend,” is a glittery affair that dips into the synth-pop realm with ease—and could likely be the song of the summer. “Lonely Life,” which Loveland explains is one of the most pop-influenced tracks, still seeps Candy Hearts-era emo through lyrics that are as poignant as ever.

“I’m really excited about ‘Lonely Life.’ It’s probably the most pop song that we have, and it’s really different from what we normally do,” Loveland explains. “I worked with a new producer that I’ve known for years, and he really brought the whole thing to life.”

But it’s the closing track that’s truly a standout for Loveland: “Jellyfish” is the stripped-down song that features a ukulele, Loveland’s sugar-coated vocals and lyrics that — like the rest of the EP — swim through your memory long after the EP comes to a close. “None of them haunted you like the way they haunted me,” Loveland mutters through the ukulele strums.

As a whole, Ice Cream Anti Social is a record that sums up what it means to grow up and figure it out. Like Loveland sings in “Lonely Life,” it’s simply about “doing the best we can.”

“I was really trying to be positive about the way life changes when you’re not paying attention, and how to embrace that change and things that maybe aren’t perfect,” Loveland explains.

And with their new EP, Best Ex have found a way to embrace change — and this poppy positioning might just be Loveland’s perfect fit.