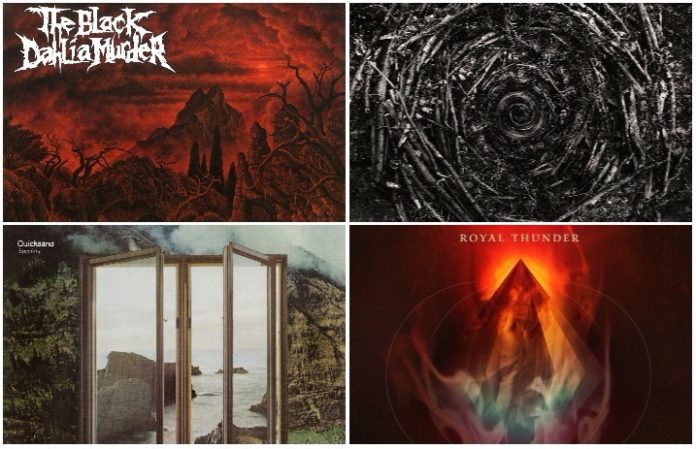 Maybe it’s too early to say, but 2017 could very well be looked back on as a landmark year for metal. It feels as though metal is slowly regaining traction in the mainstream, similar to the status it held in the ’70s and ’80s. Some may decry this, saying that metal has no place in the mainstream culture and should be reserved solely for the underground, but just like then, metal has always had something to say about the state of the world we find ourselves in. Perhaps the aggression and raw energy of metal is beginning to resonate with the culture at large once more, or people just couldn’t resist all of the kick-ass metal records that came out this year. Let’s go with the latter. Here are some of our favorite metal records of 2017.

The brainchild of multi-instrumentalist (and musical genius, we might add) Nate Garrett, who also lends his axe skills to death metal neanderthals Gatecreeper, Spirit Adrift have been generating quite the buzz with their masterful sophomore album, Curse Of Conception, and it’s much deserved. After all, few bands in recent memory have displayed this adept at understanding what metal is really about, not to mention the progression in songwriting between Curse Of Conception and Spirit Adrift’s first record, Chained To Oblivion, is like night and day. The compositions are tighter, the riffs are meaner, and the album as a whole plays like a classic. Garrett said in an interview earlier this year that his goal is to have Spirit Adrift go down as one of the best bands in the history of metal; with Curse Of Conception, we’d say he’s well on his way.

Elder — Reflections Of A Floating World

Sometimes you hear a record that takes you on a journey far, far outside of yourself. New England-based Elder did just that with their fourth full-length record, Reflections Of A Floating World. A prog band first and doom band second, Elder manage to write songs upward of 10 minutes in length that pass by as quickly and comfortably as a warm summer’s breeze. Throw on a good pair of headphones and let Elder take you away.

While not technically metal in the traditional sense, the legendary Quicksand have had an impact on the genre that cannot be overstated. After 22 long years, Quicksand dropped a third LP this year in the form of Interiors, a record that picks up right where 1995’s Manic Compression left off. From the opening notes of “Illuminant,” Quicksand spark a certain nostalgic feeling few bands can muster while still sounding just as relevant as they always have. Their emotive riffs and melodies and intelligent songwriting made Interiors one of 2017’s most special—and genuine—records.

Pallbearer have been on a steady upward trajectory as metal’s next big breakout act since their 2012 debut Sorrow And Extinction; and with this year’s Heartless, it seems as though they’ve at last reached that status. A doom band at heart, Pallbearer strike a magical balance between sincerity and accessibility that makes Heartless downright irresistible. Incredible melodic sensibilities and timeless songwriting methods make up yet another record that plays like an instant classic.

He Is Legend — few

He Is Legend continue to be one of rock’s quirkiest and most supremely talented bands. Few takes everything He Is Legend are loved for, puts it in a blender and spits out their heaviest, most-focused effort yet. Few bands (pun intended) strike such a perfect balance between crushing metal and catchy pop, with a healthy dash of rock ‘n’ roll boogie mixed in for good measure. With cuts such as “Air Raid,” “Sand” and “Jordan,” few is packed full of quick, easily digestible songs that are fun as hell to jam and even more fun to revisit. He Is Legend are indeed part of the proud few in this ilk of metal.

Havok continue to stand far ahead of the pack when it comes to modern thrash. Conformicide is proof of this, as they’ve crafted what is arguably the most perfect thrash record in recent memory. Raw energy, fierce aggression, a giant middle finger to the state of society and of course, buckets of riffs make Conformicide a can’t-miss metal record. Caution: May induce severe whiplash.