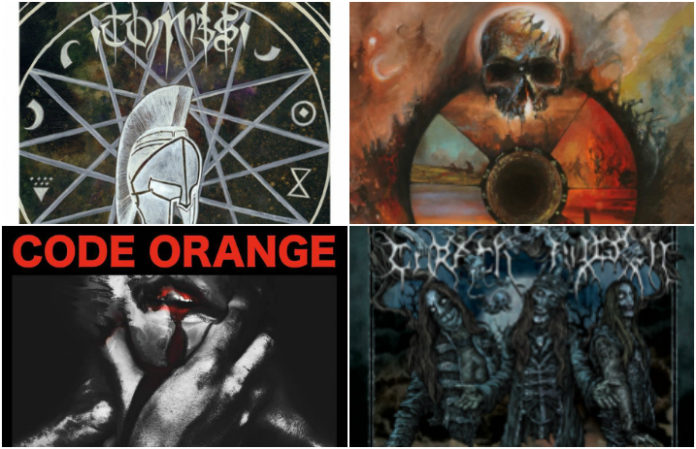 We’re only halfway through 2017, but it has been a damn good year for metal. From brutal hardcore to ripping thrash and utterly relentless death metal, 2017 has been absolutely killing it. Now, approaching the second half of the year, we wanted to share 10 metal records you should be listening to. The albums are in no particular order, with each one promising its own head-banging good time.

This was one of the first records to come out this year, and holy hell, does it hit hard. Since the album’s release in January, the buzz around Code Orange has not stopped. Touring with the likes of Killswitch Engage, Anthrax and Gojira (just to name a few), these Pittsburgh hardcore lovers have not stopped. Forever is a tight treat of delicious breakdowns and crushing delivery. Its industrial tinges play on the line of experimentation, drifting from ambient atmosphere to chaotic adrenaline. After the release of Forever, Code Orange are surely a band to keep both eyes on.

Another January release, this time from Sepultura, one of heavy metal’s greatest acts, releasing brutal records for the past 30 years. Machine Messiah brings back the best sounds we’ve come to know from the band, playing off their excellent blends of thrash and hardcore. Vocalist Derrick Green lets loose on the primal screams as guitarist Andreas Kisser mesmerizes us with his intricate guitar playing. Machine Messiah takes the best of Sepultura’s heavier records and thematic work and mashes them together to present a captivating album of hard-hitting aggression.

The Great Collapse – Fit For An Autopsy

Who says deathcore is dead? While the genre has received plenty of backlash, our friends in Fit For An Autopsy pushed aside all that noise with The Great Collapse, which tackles everything from climate change and war to issues surrounding the Dakota Access Pipeline. While the album makes for a solid work of crushing delivery, the instrumentals serve to evoke emotion from the stories. Fit For An Autopsy take the sound of deathcore and create meaningful and impactful work.

While it’s a politically charged record in some spots, Iron Reagan’s Crossover Ministry is a balls-to-the-wall party rage. The band has one mission here: to entice mosh pits through ridiculous shredding. Crossover Ministry captures both the speed of thrash and the relentless beat of hardcore, each song on the album promising fun and adrenaline. Iron Reagan do sprinkle in some seriousness amongst that fun though, taking on lyrical themes that involve corrupt politics, all while telling your neighbors to fuck off.

Trumpeting Ecstasy is a gritty, repulsive, dark treat that drags you down to its dingy depths. Full Of Hell’s fifth studio album blasts away with metallic rage and anxiety-provoking guitar trills. This is a quick and dirty record, hitting the listener and leaving a sense of dread. It is here Full Of Hell proficiently craft a work that exudes emotion, tapping into the utter darkness of anger, mixing it with a despair that rages and rips with brutality.

CONTINUE ON NEXT PAGE