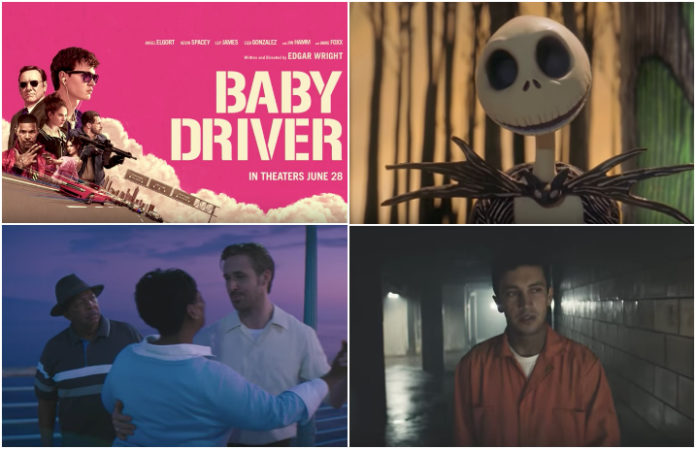 Soundtracks can make or break movies. How? The music in films can sometimes be a character itself, driving the film forward and leaving us with an endless amount of memorable moments. From award-worthy compilations to those packed with fan favorites, here are just a handful of soundtracks worth checking out.

Edgar Wright’s latest film has one of the best uses of music in recent cinema, spotlighting a getaway driver named Baby (Ansel Elgort) who suffers from severe tinnitus and uses his array of iPods as a tool in pulling off the perfect heists. The film incorporates several tracks that use the title character’s name (Carla Thomas’ “B-A-B-Y,” Boga’s “Nowhere To Run”) and his love interest Debora’s name(Beck’s “Debra,” T. Rex’s “Debora”) as a plot point. It also features original tracks, including “Easy” by Sky Ferreira (who appears as Baby’s mother) and “Chase Me” by Danger Mouse featuring Run The Jewels and Outkast’s Big Boi. The film itself also gets bonus points for some screen time by Red Hot Chili Peppers bassist Flea.

Scott Pilgrim Vs. The World

Based on the comic series of the same name, Scott Pilgrim Vs. The World follows the title character (Michael Cera) as he balances band life with his new love interest and her group of evil exes. The soundtrack includes Sex Bomb-Omb’s original songs, which were written and performed by Beck.. It also features Metric’s “Black Sheep,” which is performed in the movie by the Clash At Demonhead, led by frontwoman and Pilgrim’s ex Envy Adams (Brie Larson).

Directing duo the Daniels (Daniel Kwan and Daniel Scheinert) first worked with Manchester Orchestra on Scheinert’s video for “Simple Math,” sending frontman Andy Hull through a chilling, slow-motion car crash. Hull and guitarist Robert McDowell reunited with the directing duo when tapped to score their super-quirky comedy Swiss Army Man, co-starring Daniel Radcliffe and Paul Dano. The catch, however, was that no instruments could be used, resulting in some tracks having up to 150 vocal tracks layered to achieve the sound. Radcliffe and Dano also contributed vocals, with Radcliffe revealing he believes the score was Oscar-worthy.

Tim Burton’s Johnny Depp-starring Alice In Wonderland hit theaters in 2010 and with it came a scene-packed soundtrack titled Almost Alice. The All-American Rejects, All Time Low, Metro Station, Mark Hoppus and Pete Wentz, Plain White T’s, and Motion City Soundtrack all contributed. “Follow Me Down” by 3OH!3, featuring Neon Hitch, really stands out in a sea of great tracks with a much more toned-down version of the electro-rock duo that doesn’t skimp on the catchiness.

Twenty One Pilots’ “Heathens” leaked via Reddit nine days before its scheduled release last year, leading to the band’s label seeking legal action against whoever posted it. The day after its leak, it was revealed that the track would be part of anti-hero movie Suicide Squad’s soundtrack, and days later a music video was released with footage from the film. The star-studded compilation also includes an epic cover of Queen’s “Bohemian Rhapsody” by Panic! At The Disco and a chilling take on Lesley Gore’s “You Don’t Own Me” by Grace and Warped Tour alum G-Eazy. The soundtrack also features Skrillex, X Ambassadors and the Black Keys’ Dan Auerbach.

Gretta (Keira Knightley) and Dave (Adam Levine) are a songwriting power couple until a riff splits them up to pursue separate careers. Dave is a successful solo artist approaching mainstream success, while Gretta is discovered by an ex-record exec (Mark Ruffalo) at an open mic, leading to the production of an album on the streets of New York City. Academy Award-nominated “Lost Stars” is the standout, as Gretta and Dave each end up performing their own rendition of it. The soundtrack also includes Gretta’s rooftop performance of “Tell Me If You Wanna Go Home” and the alley jam session of “Coming Up Roses.”

The soundtrack to the teen horror comedy Jennifer’s Body was released by Fueled By Ramen in 2009, giving listeners an expertly compiled batch of tracks by Florence + The Machine, Panic! At The Disco, Hayley Williams, Dashboard Confessional, Cute Is What We Aim For, Cobra Starship, All Time Low and more. “Through The Trees” plays a prominent role in the film as it’s performed by onscreen band Low Shoulder, led by an eyeliner-wearing Adam Brody. Members of real-life band Wildling appear as the rest of the band and actually penned the track for the film.

Guardians Of The Galaxy

Marvel’s first installment of Guardians Of The Galaxy introduces us to Peter Quill (aka Star-Lord) and his Awesome Mix Vol. 1, a mixtape that plays a major role throughout the flick. The soundtrack includes the mixtape’s songs and a few extra, all tracks from the ’70s and ’80s that are familiar but not overplayed, which director James Gunn said was the goal and a way for viewers to be reminded of Quill’s old life on Earth. Some standouts include the Runaways’ “Cherry Bomb,” Blue Swede’s “Hooked On A Feeling,” David Bowie’s “Moonage Daydream” and the Jackson 5’s “I Want You Back.” The soundtrack became the first compilation of entirely previously released songs to top the Billboard 200 chart in August 2014, and by September 2014, it was the second best-selling soundtrack after Disney’s Frozen.

Golden Globe-nominated Sing Street tells the story of a teen trying to impress a girl by asking her to be the model in a music video for his nonexistent band. Sing Street is born, and while shaky at first, continues to perfect their craft throughout the film. The soundtrack includes several originals performed by the band, including “Drive It Like You Stole It” and tracks by Adam Levine, the Cure, Motörhead, Duran Duran and more.

Lindsay Lohan tried her hand at a pop career in the mid-2000s, but her fictional stint as Pink Slip guitarist Anna Coleman in Freaky Friday was debatably way cooler. With Anna’s grungy status comes a soundtrack full of scene favorites from covers by Simple Plan (the Turtles’ “Happy Together”) and Bowling For Soup (Britney Spears’ “…Baby One More Time”) to originals from Andrew W.K. and American Hi-Fi.

The Perks Of Being A Wallflower

The Perks Of Being A Wallflower is seen through the eyes of Charlie, an outsider who starts to come into his own after making new friends. In the beginning of the film, his sister hands off a hand-painted mixtape her boyfriend gave her, claiming he gives her one each week. On it, Charlie first hears “Asleep” by the Smiths, which he then places on a mixtape (twice) for his friend Patrick’s Secret Santa gift. While the book version of the mixtape also includes tracks by the Beatles, Smashing Pumpkins and U2, the movie spotlights other notable tracks such as David Bowie’s “Heroes” in the pivotal tunnel drive scene and Dexys Midnight Runners’ “Come On Eileen” at the school dance.

The Girl With The Dragon Tattoo

Nine Inch Nails frontman Trent Reznor and Atticus Ross (who officially joined the band in 2016 after years of producing their records) worked together to produce excellent scores for 2010’s Facebook biopic The Social Network and 2014’s crime thriller Gone Girl, but it was their work on 2011’s The Girl With The Dragon Tattoo that really stands out. The cover of Led Zeppelin’s “Immigrant Song” featuring Yeah Yeah Yeahs’ Karen O adds to the eeriness of the opening titles.

The Nightmare Before Christmas

The Nightmare Before Christmas is a classic animated film with iconic songs. While the originals are perfect as is, the 1993 film was released in 3D in 2006 and with it came a re-released soundtrack with fresh takes on the classics. Among them were Fall Out Boy’s spin on “What’s This?”, and Marilyn Manson and Panic! At The Disco each gave their own take on “This Is Halloween.”

Across The Universe is a 2007 romance musical centering on tracks by the Beatles. It stars Evan Rachel Wood and Jim Sturgess, among others, who all sing their own versions of the legendary songs. One of the more emotional moments occurs during “Let It Be,” and other standouts include “Come Together,” “Hey Jude,” “Strawberry Fields Forever” and “Blackbird.”

La La Land swept awards season and the box office competition earlier this year as a rom-com musical starring Emma Stone and Ryan Gosling trying to make it in Los Angeles. Gosling (a former Mouseketeer and frontman of the one-album wonder Dead Man’s Bones) performs the Oscar-winning “City Of Stars,” while Emma Stone shines on “Audition (The Fools Who Dream)” and John Legend gets groovy with “Start A Fire.”

The 2009 film adaptation of the graphic novel Watchmen hit theaters with an epic soundtrack behind it. Some of the songs mentioned in the comic itself were included in the film (Bob Dylan’s “The Times They Are A-Changin,” Simon & Garfunkel’s “The Sound Of Silence”), but the soundtrack also included new songs, such as My Chemical Romance’s cover of Dylan’s “Desolation Row.”