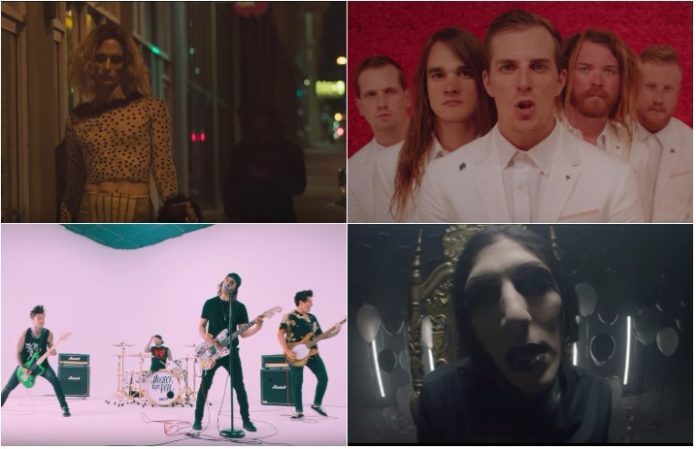 There have been so many great music videos this year, as you can tell from our ridiculously long list! From Don Broco's horrifying wedding to Neck Deep's bright and flowery “In Bloom,” we've chosen the 22 best videos that have brought our favorite songs to life.

Read more: Our staff share their favorite tours of 2017

Pronounced “copper,” Boston Manor released their third single from Be Nothing with a trippy, effects driven video. Filmed at a barn converted to a loft in rural Pennsylvania, by the end of the video you're going to be wondering if you accidentally took a double dose of LSD. —Griffin Elliot

Tyson Ritter spent the past few years on screens big and small, so it’s no surprise the frontman’s craft shines in the band’s first official singles since 2012’s Kids In The Street. Ritter tackles a dual role of Betsy and Robert in a short film that hooks you as it explores the complex sides of one person. —Rachel Campbell

Don Broco pranked their fans into thinking that they were streaming their bassists’ wedding when they premiered this music video. It is set at a wedding, but what transpires is more screwed up than a Tarantino movie with serious Hannibal Lecter vibes. This violence-fuelled visualization is engineered to shock and entertain. —Chelsea Smile

This video is just bloody good fun. After all the drama that’s followed Paramore around over the years, it’s nice to see Hayley, Taylor and Zac falling back in love with the band that started it all for them. Those jumpsuits are wicked, too. —Jake Richardson

From a glowing brain to a translucent raincoat, “High” by Sir Sly is as confusing as 2017 itself. A perfect visualization of the radiant track, it’s graphic, it’s vivid and it has all necessary ingredients of a great music video. Yet, what makes “High” truly special is how it completely and gracefully changed Sir Sly’s previously austere and mysterious image. Marking an end to years of silence, “High” is how to properly transform a band’s personality in a way new and old fans can get behind. Props, Sir Sly—I didn’t see it coming. —Caitlyn Ralph

Coldfront – “Everything You Want Me To Be” / “So Typical”

The two videos Coldfront released to promote their debut full-length Float Around, out now on Equal Vision Records, are a very real look into the lives of these Canadian punks. Pizza filled romps around Toronto and basement jam sessions are wonderfully articulated through the lens of YEAH! Films. —Griffin Elliot

MIW consistently go above and beyond with their music videos. Visual art is as important to this band as musical composition. The music video for “Necessary Evil” challenges the traditional concepts of sin and depravity as the band revel in a gothic party for the ages. —Taylor Markarian

Circa Survive’s “Lustration” is a beautiful music video that parallels two realms simultaneously: that of the real world and that of a Mother Nature type being. The Amulet’s album artwork is brought to life surrounded by gorgeous animated and colorful motion graphics that give warmth to the high-tension situation of birth in the wilderness. —Kaitlyn Ulrich

The Maine have been taking their albums’ aesthetics pretty seriously, and “How Do You Feel?” is proof of how well it works out. The contrast of the band playing in white suits against a background of red roses created the most beautiful music video they have released to date. How do I feel? After watching this video, pretty emotional. —Natasha Heinz

With Confidence’s newest video release, “Waterfall,” shatters the realm of “visually pleasing” and offers four minutes and 15 seconds of cinematic pleasure. In a world ruled by technology and fueled by the decay of genuine human interaction, “Waterfall” takes us on a stunningly, dramatic journey of love and loneliness. —Paige Owens