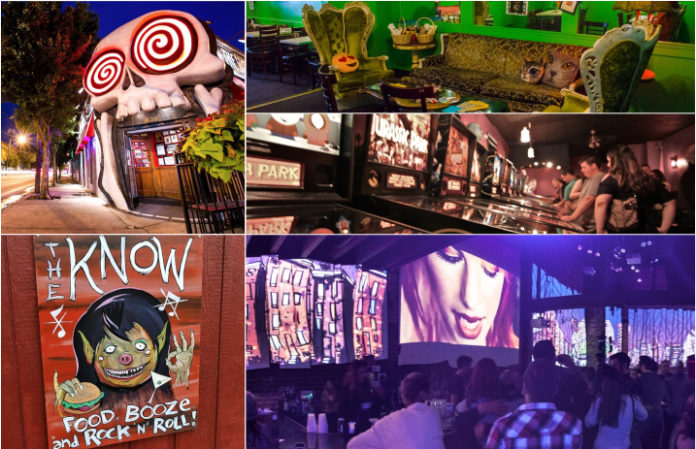 From speakeasies to the modern day alehouse, we’ve seen a number of famous bars rise to attract tourists from all over… but then there's a rock 'n' roll bar. What makes a rock 'n' roll bar unique from its regular counterparts is its graffitied walls, LPs lining the moldings and punk spirit. Here at Alternative Press, we look to reintroduce this hidden art form and give you a bucket list of some of our must-visit rock 'n' roll bars across the country.

This hip and unfussy local watering hole nestled in the southwest city’s Paradise Valley neighborhood hosts many concerts, open-mic jams and dance lessons. The Blooze is a place with rock ’n’ roll as an integral part of the cultural fabric.
Their Message: “Great neighborhood local bar with live music, great service and friendly atmosphere: we’re just like a Cheers.”

This no-nonsense venue in downtown Alamo City features a full bar, live music (from metal to punk), a jukebox, TVs, billiard tables  and darts. Bond’s culmination of atmosphere, prices and music create a great experience.
Their Message: “We are the home of the big ass glass and the bad ass bands.”

Founded by Counting Cars’ Danny Koker, Count’s Vamp’d represents rock ’n’ roll and the classic era of the Sunset Strip where you can enjoy great food, drinks and music all under one roof. It’s a good-time destination for locals and tourists.
Their Message: “Eat, drink, rock!”

[Photo by: The Dirt Bar/Website]

In a city overrun with clubs playing Top 40 and hip hop, the Dirt became a refuge for those who were drawn to rock and metal music. A slew of famous musicians have been known to dip in to drink with the regulars after their Houston shows.
Their Message: “It’s collars and ties shoulder-to-shoulder with tanks and tattoos: we’re the Dirt, and we play rock ’n’ roll!”

With two floors of madness, Exit is open 365 days a year until 4 a.m. It is Chicago’s premier long-running late-night punk bar in a dark, narrow, industrial space with gas masks and skull art adorning the walls.  Every night at Exit is a different experience.
Their Message: “Chicago's original punk rock bar since 1981.”

THE KNOW – Portland, OR

Earlier this year, the Know reared its head in the Hollywood District at the former site of the Blackbird and Tony Starlight’s after shutting down its original Alberta Street location. If you want to go to a bar with stiff drinks and heavy music, this is your place.
Their Message: “We’re very excited about this. You should be too.”

Manitoba's World Famous Rock ’n’ Roll Tavern is a mom-and-pop run business owned by Richard “Handsome Dick” Manitoba, frontman for legendary New York punks, the Dictators. It’s a comfy neighborhood bar featuring 100 of the greatest photos taken by rock's greatest photographers.
Their Message: “Doing our part to save rock 'n' roll, have people actually engage in the art of socializing, all the while not being a fuckin' lounge.”