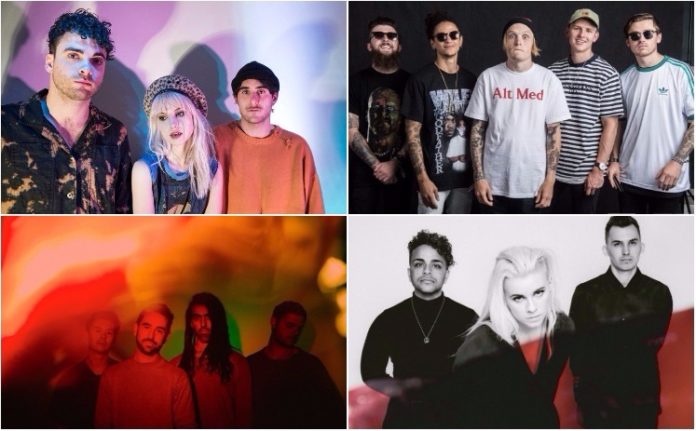 Our list being 28 songs long should hint at one thing: A lot of good music was released in 2017. This definitely shows on the fact that our staff's choices include a Brand New song and, believe it or not, more than one b-side. From tracks that made us cry and lyrics that made us want to sing along to songs that got stuck in our heads for days, here are the best songs of 2017, according to the AP staff.

“Surrender to the sound.” You can't help it when absorbing the story of a relationship gone awry in Bridgers' pop-tinged indie heart-breaker, “Motion Sickness.” It's specific to her experience but wholly relatable—almost painfully so. If you've ever felt the powerful tide of love, this one's for you. —Brian Leak

“Rabble Rouser” by Enter Shikari is a musical mish-mosh that works in the best way to create not only a sonically diverse and interesting listen, but a feeling. The band do a fantastic job of echoing the chorus' lyrical sentiments with the sound that backs them. “Warning, this escalates quickly/Are you getting nervous?” Well, considering eight seconds in, vocalist Rou Reynolds warns “I torture rock stars with pliers” over ominous jungle beats that echo a gloriously unsettling guitar riff, yes. Yes, I am getting nervous. From there, the danger-hinting music only, you guessed it, escalates quickly. —Cassie Whitt

Sorority Noise’s 2017 record You’re Not As ____ As You Think is undeniably one of the year’s most heartrending releases. Drenched in brutal honesty on love and loss, the opening track of the record is one of the most poignant on the release—and might just be one of SoNo’s best tracks to date. Not to mention, the song’s Kyle Thrash-directed music video is a true masterpiece. —Maggie Dickman

Taken from Lights’ Skin&Earth, there is no denying that “Savage” is a straight-up jam—plain and simple. The badass anthem is part of a bigger story (literally) as the vocalist’s album coincides with a comic series of the same name that she wrote and illustrated. Plus, bonus points for Josh Dun’s sick drum contribution. —Rachel Campbell

Young Gunner collaborated with fellow rappers Quavo and Ty Dollar $ign on this boisterous track from his latest record, Bloom. Opening with a traditional French accordion, “Trap Paris” has more bounce than a hydraulic lowrider and was a floor-filler as soon as it was unleashed just in time for the summer. —Chelsea Smile

“You’re never gonna be normal cause you’re a punk!” Try to get this life-affirming chorus out of your head—bet you can’t manage it. “Normal” is the cornerstone of the Homeless Gospel Choir’s stunning new album. This guy is going to do big things. —Jake Richardson

In This Moment keep raising the bar and pushing the limits in all directions. “Oh Lord” is an emotionally powerful ballad accompanied by an enthralling music video. —Stevie James

The title track off A Will Away’s Here Again proves to be one of the most driving and feel-good songs off the record. This band is not slowing down anytime soon. —Tyler McFadden

With heartfelt lyrics and a catchy chorus you can't help but belt from the top of your lungs, Neck Deep created the go-to pop-punk anthem of the year that paved the way for the rest of The Peace And The Panic. —Whitney Paxton

If you haven’t had Waterparks’ track “Blonde” stuck in your head at least once this week, then you’re doing something seriously wrong. The debut single from their forthcoming sophomore album Entertainment reflects the group’s evident musical development and can only be classified as one thing: a total bop. —Paige Owens