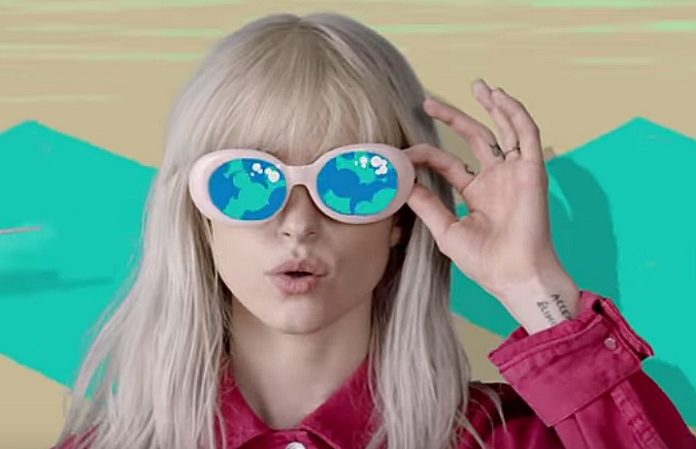 It’s that most wonderful time of the year: Warped Tour is imminent, school is almost out and weeks of fun, sun and good times lie ahead. So, gather your mates and blast these feel-good summer tunes. We’ve got everything from the Menzingers to Matty Healy on this list.

Read more: 12 of the best pop-punk ballads, ever

Summer means fun, and when it comes to rock music, fun means All Time Low. This cut from 2012’s Don’t Panic features guest vocals from Cassadee Pope, who got engaged to ATL drummer Rian Dawson earlier this year (aw); and with lyrics like, “You’re salty like a summer day/Kiss the sweat away/To your radio,” it’s a song characterized by a typically pop-punk attitude to summer romance.

BTW, did you know All Time Low are on the cover of this month’s AP?! Well, you do now.

Indie-rock has to be a part of any decent summer playlist. In the form of the Amazons, we present to you the U.K.’s hottest indie band. Featuring a soaring, singalong chorus and lyrics about hanging out with your mates, “Junk Food Forever” is a song destined to be a summer smash. Word of warning: Every time you hear this song, you’ll want to get McDonald’s.

Judging by this video, a Best Coast summer consists of lots of sport—bike rides, tennis lessons…Bethany Cosentino is even hitting up the gym at one point. If you like getting out and about in the summertime, stick “Feeling OK” on your playlist. You’ll be feeling more than okay once you’ve blasted this during your workout.

Leaving for university is an exciting time, but if you’re leaving friends and loved ones behind, it can also be an emotional experience. Mark Hoppus captures that feeling in this heartfelt track from Blink classic Enema Of The State — a tender moment of youthful vulnerability in an album that, for the most part, is the epitome of brattiness.

Who do we talk to to arrange a rad holiday like this one? This song and video sum up everything great about the U.K. pop-rockers: It’s slick, cool, and most importantly, unique. “Automatic” also packs plenty of summer groove — with a solid helping of driving guitars, too.

What could be more summer than singing about driving up the coast? Even if you don’t live near the sea, you’ll feel like you do once “West Coast” kicks in. That “ah, ah, ah, ah” chorus is massive, too.

The Menzingers – “Thick as Thieves”

Another song that talks about the ocean, another song with a chorus that hits you harder than a tidal wave. “Thick as Thieves” hails from this year’s critically acclaimed After The Party, and given the amount of bangers on said album, it’s a record we’re backing to go down as a punk-rock classic.

The clue is in the name with this one. Danger Days is by far MCR’s most summer friendly record; and with “Summertime,” Gerard Way and co. channel their fondness for the Cure to tell a musical story of summer love. Fun fact: This song was originally titled “Anytime You Want” and was even referred to as such on early track-listings released to the public, before the band had a late change of heart.

An ode to shitty hometowns, “Can’t Kick Up The Roots” is a must-have for any summer pop-punk playlist. This track finds Ben Barlow singing about playing football and getting drunk with friends; so when you’re doing exactly that this summer, soundtrack those good times with this track.

The Offspring – “Cruising California (Bumpin’ In My Trunk)”

This song is undeniably catchy, and we don’t really care if the Offspring are trolling us with “Cruising California”—after over 30 years at the top of the punk-rock pile, we’ll allow them a little fun.

“PARAMORE ARE BACK—AND THEY’VE GOT A NEW SONG, WHICH IS A TROPICAL POP BANGER!”

“YAY! LET’S GET IT ON OUR SUMMER PLAYLIST—RIGHT NOW!”