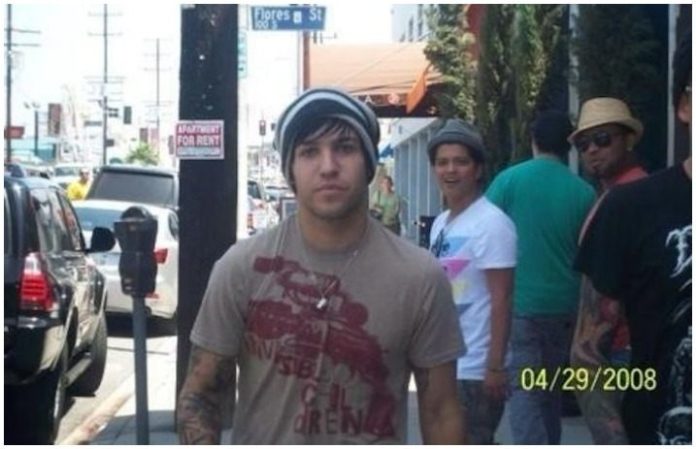 To some, 2008 may feel like it was just yesterday. However, the reality is that it was 10 years ago when neon pop punk was at the forefront, Katy Perry was an up-and-comer on Warped Tour and Sonny Moore was just on his way to becoming Skrillex. Head below for a recap on these moments and more.

Ronnie Radke fronted Escape The Fate from the band’s inception in 2004 until 2008 when he was kicked out by the other members. ETF recruited Craig Mabbitt (who had recently parted ways with Blessthefall), and his first show was Las Vegas’ Extreme Thing in March 2008. Unfortunately for Mabbitt and co., a scorned Radke was there to heckle from the crowd. Having had enough with Radke’s actions, bassist Max Green declared, “This next song is called, ‘If I Could Stay Clean, I Could Stay With My Band’” to which Radke responded, “I can stay fucking clean, you dick!” Two months before this, Radke was sentenced to a 48-month probation for his role in a fight that ended with the death of one man in 2006. He also was ordered by the judge to enroll in rehab, but he failed to check in with his probation officer, which led to an intense chase. He was taken into U.S. Marshal custody in June 2008 and sentenced to 48 months in prison. Meanwhile, ETF entered the studio with producer John Feldmann to put out their first record sans Radke, This War Is Ours, in October 2008. The feud stayed heated as ETF continued to spout remarks from the stage, which Radke later referred to as the “lowest of lows” as they knew he couldn’t fully defend himself from behind bars (minus a few blog entries likely posted by friends visiting him in prison). Radke was released in December 2010 and put together Falling In Reverse. The feud eventually fizzled out, and in early 2014 the two bands embarked on the Bury The Hatchet tour.

READ MORE: Exclusive—Falling In Reverse and Escape The Fate bury the hatchet with upcoming tour

Fearless Records’ Punk Goes… series has highlighted pop, metal, acoustic, ’80s, ’90s, classic rock and Christmas classics, but none of these are nearly as iconic as 2008’s Punk Goes Crunk. The comp gave us epic hip-hop covers that allowed us to hear such legendary lines as the Devil Wears Prada’s guttural “Gator boots with the pimped-out Gucci suits/Ain’t got no job, but I stay sharp” (“Still Fly”) and the Secret Handshake’s electro-tinged “I wish I was a little bit taller, I wish I was a baller/I wish I had a girl who looked good, I would call her/I wish I had a rabbit in a hat with a bat/And a six four Impala” (“I Wish”).

In a meme that still holds strong nearly 10 years later, a pre-fame Bruno Mars (who was still two years away from releasing his debut full-length) was captured in mock shock at seeing Pete Wentz in the wild. In May 2017, Wentz talked to Buzzfeed about the photo, revealing he has never discussed it with Mars or Mars’ writing partner, Philip Lawrence, who is also in the shot. He did say, however, that Mars revealed in an interview that a photographer bumped him eliciting the reaction, which in turn “takes a little bit of the magic out of it.”

Yellowcard wrapped an acoustic tour backed by the Spill Canvas, PlayRadioPlay! and Treaty Of Paris in April 2008. Following the tour’s conclusion, the pop-punk act announced an “indefinite hiatus,” citing the need for a break and the ability to “figure out [their] personal lives.” They reunited in August 2010, revealing that they signed to Hopeless Records. When You’re Through Thinking, Say Yes; Southern Air and Ocean Avenue Acoustic were released through the label before they hopped over to Razor & Tie for 2014’s Lift A Sail. They returned to Hopeless in 2016 to release their self-titled final record, embarking on a farewell tour that same year. In preparing for the end of an era, frontman Ryan Key reflected on that 2008 hiatus, revealing in an interview for Spotify that they didn’t know if they would ever reunite: “We weren’t necessarily breaking up the band, we didn’t really know what was going to come next.”

Back in 2008, Cody Carson was an avid YouTube user creating vlogs and cover videos. One such video included a plea to All Time Low frontman Alex Gaskarth to allow him to perform “Coffee Shop Soundtrack” with the band at the Cleveland date of the 2008 AP Tour, which was near where he was attending college. In the video, Carson notes he hadn’t been able to perform for a crowd the size that ATL garners, explaining he’s been in bands before, but “it hasn’t quite worked out yet.” Gaskarth responded and allowed Carson to join the band onstage. Less than a month later, Carson announced the formation of Set It Off, and he has since cited that performance as the inspiration to drop out of school and chase his dream.

Alkaline Trio appeared on The Hills

MTV’s Laguna Beach spin-off The Hills was filming its third season around the same time Alkaline Trio were working on Agony & Irony, their first and only release through Epic Records. One of the show’s main characters, Audrina Patridge, was employed by Epic in turn, giving us one of the most awkward TV moments ever at the band’s expense as they rocked out to “In Vein.” Two years after the episode aired, Alkaline Trio frontman Matt Skiba told The Aquarian they received slack for doing the show. He defended the choice by explaining Patridge and her sister, Casey Loza, are fans with the latter even naming her daughter after one of their tracks (“Sadie”). Given that Patridge was employed by Epic, they didn’t see any harm in allowing her and the crew into the studio. Skiba explained they didn’t realize the magnitude of viewership the series garnered, but they still would have done it if no one watched the show because it was for someone who was a fan.

From First To Last released their first record without Sonny Moore

From First To Last solidified themselves as emo staples following the release of their first two records—Dear Diary, My Teen Angst Has A Body Count and Heroine. Despite this, frontman Sonny Moore left in early 2007 to pursue an eponymous solo career and later established himself as the Grammy-winning Skrillex. The band continued on with guitarist Matt Good moving to vocal duties, and their 2008 self-titled was the first with him in the new role. The band dropped two more records—Throne To The Wolves in 2010 and Dead Trees in 2015 (the latter of which featured Spencer Sotelo on lead)—with a hiatus in between. Rumors of Moore reuniting with FFTL started circulating in July 2016 and grew even more when Mark Hoppus posted a photo hanging out in the studio with Travis Barker, Feldmann, Good and Moore in January 2017. A few days later, FFTL released “Make War,” the first track with Moore on vocals since 2006’s Heroine, confirming his reunion with the band.

The Medic Droid released their only album

Chances are if you were a teen with a Myspace account in the mid-2000s, you knew of the Medic Droid and probably added their viral hit “Fer Sure” to your page’s playlist. The band, consisting of Chris Donathon and Hector Bagnod, first met in 2003 after a New Found Glory shirt sparked a conversation. They later started making music, posting “Fer Sure” on Myspace in late 2006. The track took off, leading to “Keeping Up With The Joneses” and “FScene8.” The electro-pop duo landed their first gig opening for Enter Shikari in New York City in September 2007 through a friend. They then self-booked some shows and eventually signed with Epic subsidiary Modern Art Records. After embarking on a spring 2008 tour with A Cursive Memory, they released their full-length debut, What’s Your Medium, (which, of course, included “Fer Sure”) that summer. Following the album’s release, they set out to open for Kill Hannah alongside Innerpartysystem and the White Tie Affair. They closed out the year with a headliner and then announced the end of the band, citing it was time to move on. The duo made the switch to Facebook in 2012 and later reunited at South By So What?! 2013. Three years later, they played a handful of shows and released their first new music in seven years—“Closer” and “Disco Queen”—but have since remained quiet.

Pete Wentz launched his first bar Angels & Kings in New York City in 2007. The co-owner bassist described it as a “dive bar” where he could hang out with his friends that included then-girlfriend Ashlee Simpson (whom he would wed in May 2008 and divorce three years later) as well as members of Gym Class Heroes, the Academy Is…, Cobra Starship among many others. The following summer, Wentz and partners opened a second location in Chicago’s River North neighborhood. The new spot kept up the mugshot theme, which included real ones of musicians on the wall as well as the ability to take your own in a photobooth. The bar relocated to the Hard Rock Hotel Chicago in 2011 before shuttering in 2015. A third location opened in Barcelona later in 2008, and a fourth popped up in LA in 2010, but all have since closed.

3OH!3 had one self-titled record they self-released in 2007 under their belt before signing to Photo Finish Records. They dropped the first single, “Don’t Trust Me,” from their forthcoming label debut in June 2008. A month later, Want was released, and they set out on Warped Tour in support of it. The single gained major traction and became radio gold, peaking at No. 7 on the Billboard Hot 100 and later hitting triple platinum RIAA status in 2011.

Before she was among the coveted list of Super Bowl halftime performers and filling arenas across the world, Katy Perry was sweating it out on Warped Tour with the best of them. Perry embarked on the 2008 leg in support of her first full-length, One Of The Boys, under her current moniker (following a self-titled contemporary Christian debut under given name Katy Hudson). Perry tweeted a memory of the tour two summers ago, revealing a famous stage dive caused her to lose a shoe. That Warped stage dive wasn’t the first for Perry, who used the move in support of then boyfriend and Relient K frontman Matt Thiessen back on a 2005 stop of the tour.

Mayday Parade headed out on Warped 2008 in support of their full-length debut A Lesson In Romantics. While on the tour, frontman Derek Sanders’ brother was slated to get married. Instead of skipping the Marysville, California stop due to being down a frontman, the band tapped other vocalists on the tour to fill in including All Time Low’s Alex Gaskarth, Pierce The Veil’s Vic Fuentes, We The Kings’ Travis Clark and the Audition’s Danny Stevens.