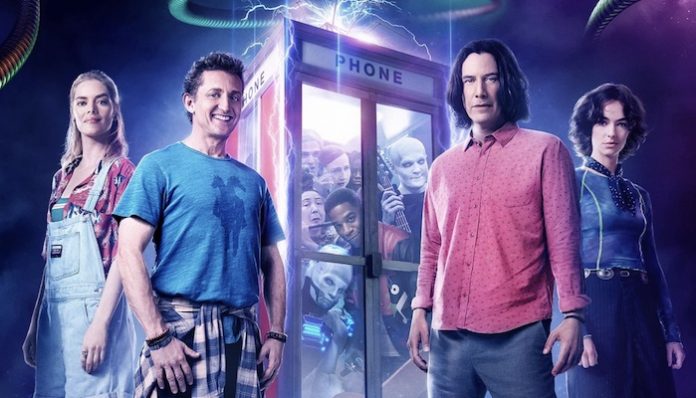 2020 has been a bummer year. COVID-19 has taken the lives of thousands around the globe while disrupting our everyday lives and making us fearful of the most simple social situations. When it comes to arts and entertainment, the pandemic turned the entire industry upside down, with streaming services and virtual events becoming the primary source for new movies, TV shows and live performances. Despite all the uncertainty that we’re all under, one thing many of us are excited about is the long-awaited third installment of the Bill & Ted film series, Bill & Ted Face The Music, hitting select theaters and On Demand Sept. 1.

Keanu Reeves and Alex Winter will return as the titular characters, even though things have changed since the last time we saw them in 1991’s Bill & Ted’s Bogus Journey. The upcoming film has the duo dealing with the reality of middle-aged life while being dealt the task by a visitor from the future to write a song to fulfill their destiny of saving the universe.

There are a lot of questions and anticipation surrounding the unveiling of the hyped-up flick. With that said, here are 10 theories of things we hope to see in the film.

A tribute to Rufus

One vital character of the first two films is the time traveler Rufus, who serves as a guide for Bill and Ted. In 1989’s Bill & Ted’s Excellent Adventure, he assists them with a phone-booth time machine to ace their history presentation so Ted doesn’t have to attend a military academy in Alaska. In the second film, Rufus becomes lost in the circuits of time due to the evil antagonist Chuck De Nomolos wanting to alter history and prevent Wyld Stallyns from winning the San Dimas battle of the bands. At the end of the film, he reveals himself to be in the disguise of the organizer Ms. Wardroe (Pam Grier). He encourages Wyld Stallyns to play, and they end up winning. Rufus is played by the legendary comedian George Carlin, who passed away in 2008. Kim (Kristen Schaal) gives a nod to Rufus in the second trailer, saying “Greetings, my excellent friends” to Bill and Ted. Carlin is also slated to appear in the third film via archived footage, so it’ll be interesting to see how he’s presented. Hopefully it’s in a way that both does the character justice and honors an American cultural icon.

A major character from the second film who’s going to be returning is the Grim Reaper (William Sadler). In the first trailer, there’s a quick snippet of Bill, Ted and the Grim Reaper air-guitaring, but what else will they be doing together? Do Bill and Ted go back to hell? Will they have to play the embodiment of Death in another series of board games? Does the Grim Reaper help them write the song of their lives? There are many questions, but whatever role Sadler’s character plays in Face The Music will surely provide some answers.

Depictions of the ever-changing music industry

A lot of things have changed in the way music is consumed since 1991. In the early ’90s, the record store was the place to be when it came to staying on top of the new releases. Print magazines were the databases for music news, interviews with musicians and who was hitting the top of the charts. Nowadays there are streaming services such as Spotify where you can play any song under the sun and tons of websites covering what’s going on in today’s music world. Social media has also changed the way bands and musicians interact with their fans. How have Wyld Stallyns dealt with these changes over the years? Have they adapted, or have they been left behind? From the first trailer stating that the last show they played was in Barstow, California, for 40 people who were there for $2 taco night, it could very well be the latter.

We can’t forget about the second half of Wyld Stallyns, especially the rhythm section. The 15th-century English princesses, Princess Elizabeth and Princess Joanna, are the drummer and keyboardist in the band, respectively. For the third film, Erinn Hayes will be playing the role of Elizabeth, while Jayma Mays plays the role of Joanna. Will the princesses be more modernized and lose their royal quirks? Will there be friction between them and their husbands due to the band’s underachievement? It’ll be interesting to see how these character arcs have progressed over the past 29 years since the last film, especially with the second trailer beginning in couples therapy.

The smartest being in the universe, Station

In Bill & Ted’s Bogus Journey, the duo realize that they need to find the smartest being in the universe to create robot versions of themselves to defeat the evil versions of themselves. To do this, they consult an alien duo named Station who helps them with their task by making the robots with supplies from a hardware store. You can’t help but wonder after the second film if Station will make a return for the third. With the objective being to write a song to save the world, wouldn’t Station be an ideal candidate to help? It would be cool if the lovable alien came back to once again lend some assistance.

Comment below if you're totally excited to see the most triumphant @KidCudi in Bill & Ted Face the Music this Summer! 🎸⚡️ #FaceTheMusic #BillAndTed3 #KidCudi

In Face The Music, there are a few contemporary musicians who are already included in the cast. Hip-hop artist Kid Cudi will be playing himself in what will most likely be a cameo role. Win Butler from Arcade Fire will be playing a member of the Great Leaders from the future. As of press time, that’s it for now, but who else can be included? Will someone such as Courtney Love or Eddie Vedder have a role, or will it be another act from the post-2000s era? Either way, it could be fun to see who else will be involved.

A big wild card going into the third film is that Bill and Ted are both dads. Ted and Princess Elizabeth have a daughter named Wilhelmina (Brigette Lundy-Paine). Similarly, Bill and Princess Joanna also have a daughter named Theodora (Samara Weaving). Wilhelmina has the shortened name of Billie while also having the nickname “Little Bill,” whereas Theodora goes by Thea with the nickname of “Little Ted.” We know from the second trailer that both daughters are putting together “a most extraordinary band” to help their dads, but do they inherit their parents’ musical talents?

A scene with an epic music moment

A big part of the Bill & Ted movies is the music that goes along with certain scenes. You can’t forget Beethoven (Clifford David) shredding the keyboards in the first film to Extreme’s “Play With Me” during the mall chase scene. There’s also the triumphant final scene of the second film where Wyld Stallyns win the San Dimas battle of the Bands by performing KISS’ “God Gave Rock & Roll To You II.” It’s only proper that the third installment contains an epic music moment, which looks like it might be coming from the history-spanning band their daughters are forming. This should make the upcoming release that much more exciting.

The reason why they’re in prison

One weird part of the trailer is while traveling through time to steal the song idea from their future selves, Bill and Ted find themselves all muscular and tatted while in prison. Ted has a weird-looking mullet, and Bill is completely bald with both of them wearing orange prison uniforms. Their imprisoned selves sing a chant with their fellow prisoners joining in, with the modern Ted saying afterward, “It’s a little on the dark side, but you know, that’s cool” while shrugging his shoulders. There has to be some explanation to how the pair wound up in prison. Hopefully it’s not just for comedic effect and adds to the story.

Bill & Ted’s Excellent Adventure and Bill & Ted’s Bogus Journey both end in similar ways. The first film concludes after the duo ace their history presentation, and the second one ends after Wyld Stallyns are victorious in the battle of the bands. Both of these finales are quirky triumphs against the odds to fulfill a common destiny. So how will the third film, and ultimately the trilogy, end? The second trailer reveals that a song the duo wrote will save humanity, suggesting some great disaster will be undone by the power of music. How exactly will Bill and Ted save the world? The only way is to Face The Music after the film comes out Sept. 1.