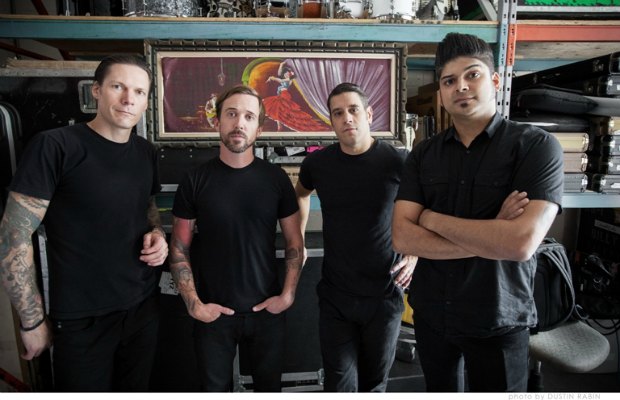 BILLY TALENT might not have the highest profile in the U.S., but in their native Canada they’ve reigned as platinum-selling punk superstars for more than a decade. The career-spanning Hits (out NOW via The End Records) collects 12 of the band’s biggest charting singles north of the border and tacks on a pair of new tracks just as worthy of inclusion. The resulting package makes for the perfect primer to Canada’s best-kept secret. As the band continue working on material for their next album, Jesse Richman caught up with singer Ben Kowalewicz to find out how it feels to sum up a career while still midstream.

Putting out Hits is pretty significant achievement. Not many bands reach the point in their careers where they have enough “hits” that they can release them as a standalone package. Hits packages often denote an endpoint, or at the very least the end of one chapter and the beginning of another. What kind of reflection have you done on your career as you’ve prepared Hits for release?
BEN KOWALEWICZ: We live in a day and age and a time where everything is very disposable. The funny YouTube clip of the day comes your way. The passing, catchy pop song comes and goes. For us, it was really a nice way to breathe life back into these songs. And in a lot of places—and especially in a place like the USA, where we haven’t had as much success as we’ve had in a lot of other parts of the world—maybe these songs will be the first time kids will have ever heard them. For us, that’s exciting and really captivating.

[Hits] is a nice way to bookend what we’ve done and accomplished and also to signify a turning point, a new beginning and a new horizon. We’re at the studio right now working on new music. We don’t really ever take any time off; we are just so passionate about what we do. Right now, we feel so reinvigorated and inspired to challenge ourselves to take it to the next level. So that’s our goal. I think all this quasi-nostalgia that we’ve gone through over the last couple months of making this has really given us a lot of perspective.

The two new tracks on Hits are probably what fans are most excited about. “Kingdom Of Zod” is a pretty clear indication that Billy Talent aren’t mellowing with age—you sound as angry as ever. For as long as you’ve been doing this, what’s kept that fire burning?
Well, I think with “Zod” we were working on it with the intent of it being on our new record. The groove and the riff of the song, it’s old-school Billy Talent in a way that makes you bob your head, makes you move in your seat. I’m sure you’ve heard about [Toronto’s] now-defunct mayor, Rob Ford…

Very much so.
He made a complete mockery of our city and the beautiful people that live in it, and we were just listening to how that all transpired, how it was all going down. We were sick and tired of people who get in front of the microphone and say something, and then don’t stand behind their convictions. We’re kind of fucking fed up by that. It was a really big point of contention here in our city, for months and months and months. I had never seen such a divide, and such a passion for change in our city, and that’s where the song stemmed from. Believing in yourself, believing in your community, and knowing that the truth is out there and that there are a lot of like-minded people just down the road from you.

The other new song, “Chasing The Sun,” is a real contrast to “Zod.” It’s a quiet acoustic number. Was it important to you to present those two sides of the band at once?
We love challenging ourselves and our fans. All of our favorite bands growing up had always done that to us. Our way of thinking is, if we’re going to be the band we aspire to be, then we can’t have limitations; we can’t stick to one sound all the time. You paint yourself into a corner. That song was probably one of the hardest songs, if not the hardest song, we’ve ever written. We had lost someone very, very close to us in a sudden and tragic way, and it really shook us to the foundation of who we are as people. What’s important in life and what’s not. So that song is more of a letter written to our friend. It means so much to us. Like you said, it’s a complete contrast to “Zod” but it’s exactly what felt right and what needed to happen at that time.

Why was now the time to do Hits? Was there a contractual element?
No, there was none of that. I know that a lot of bands used to do that to get out of their contracts. There was no motivation other than to share the songs and reintroduce them to people. It’s one of those interesting things where sometimes you come up to someone who’s like, “Yeah, I used to love you guys!” And it’s like, well what happened? “Oh, I used to listen to you in high school!”

Now that you’re at this milestone in your career, when you look around and take stock, do things look like you had imagined they would look?
It’s 10 million times more than we ever imagined we were capable of accomplishing, or what we set out to do. We were just a bunch of kids in high school that would play in our local cafeteria. And then we were playing parties, and then the odd shithole club or bar, and then we spent 10 years playing every shithole bar and club. I think anybody that’s picked up a guitar, or sat behind a drum set or whatever the case may be, you always dream that you could potentially make a living out of it, and be able to share your music with people and have them gravitate towards it in one way or another. It’s been the craziest, most amazing journey. And we’re not done just yet.

What dreams do you still have? Is there an unfulfilled goal you’re still reaching for?
Music is neverending; there’s no end or beginning. If it’s inside of you, it’s something that cultivates and you have to explore it further. It’s a drug. I think that’s our motivation right now, just trying to write the best songs that we possibly can and to have as much fun. The only motivation we have at this point is that goosebump feeling when you get something; when you’re working on something and you go, “We got it!” Not even half an hour ago, I was downstairs and we were working on this part, and we figured it out. Everyone’s high-fiving each other, so stoked, because we figured out this part that we’d been working on for a while. Those are the types of things, the magical kind of moments you can’t really explain or articulate too well, but when you get to share the song, hopefully people get to feel the same thing you felt when creating it. Then you’ve succeeded.

So you mentioned you’re writing right now. What’s the plan  for Billy Talent?
We haven’t really stopped in about three years. We actually haven’t stopped in about 20! But we’re at this amazing point, where as of literally last week, we were like, “Okay, we have no shows, no obligations in any way, shape or form.” So we’re just gonna hang out and work diligently, as we do. But we’re not going to put any timelines or any constrictions on this until we feel like we’ve written the best record that we’ve ever done. Right now it’s a beautiful, magical moment, and the other stuff will follow suit. alt