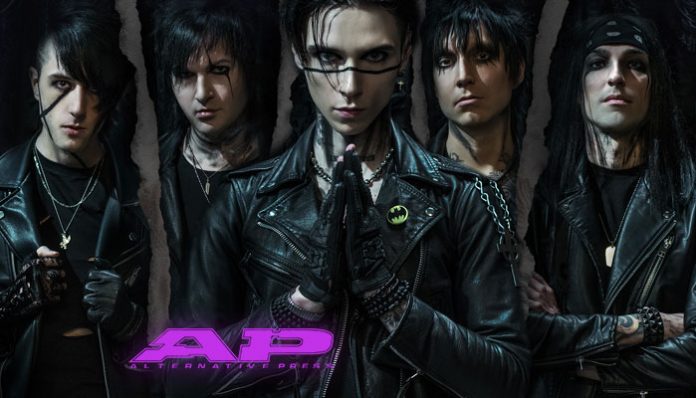 We’re shocked, really. The response to our 35th anniversary issue (AP 384) was overwhelming and special. We received a lot of positive feedback about last month’s magazine. The most frequent observation was how good it looked, followed in the same sentence with, “Why we didn’t make it a series?” Many readers appreciated the photos and the collectibility aspect of the anniversary issue. And then we thought, “Why didn’t we do that?”

So with the help of Black Veil Brides, we’re launching a special ultra-limited-edition series of AP 384. The BVB fandom has spoken, and we’re proud to have Andy Biersack, Jake Pitts, Jinxx, Christian “CC” Coma (and new guy Lonny Eagleton) back for their ninth cover. It’s only fitting. The original impetus for the issue was to do something for the fans. And frontman Biersack knows something about fandom intimately. Biersack famously gave away his band’s Most Dedicated Fanbase award to a fan at the first Alternative Press Music Awards in 2014. (Not long afterward that day, he got to perform with the object of his fandom, the Misfits.)

“We have been a band that, for the entirety of our career, we were not seen as the darlings of really anything,” Biersack says. “We were not a band that came out the gate and everybody said, ‘Yeah! Give them a chance.’ We were a band that had an audience that essentially propped us up and pushed us through doors. We’ve never had the incredible artistic credibility where everybody assumes that every release we have is perfect and there’s no criticism. We’re a band that, at some point, were on the cover of a magazine saying ‘The World’s Most Hated Band.’”

The subject of fandom is something that Biersack is acutely familiar with. Growing up in southern Ohio, his bedroom was festooned with photos of bands torn out of issues of magazines like AP. Nowadays, BVB get messages from fans who live vicariously through them while listening to multiple plays of Wretched And Divine. Having been on the receiving end of fan worship for the last decade hasn’t changed his mind in the slightest.

Read more: Black Veil Brides are already working on their next album

“For the entirety of our career, if it weren’t for the passion of our audience,” he continues, “I don’t know [if] we ever would’ve stood a chance. I can’t tell you how important it is. To be 10 years into where we’re at with this band, to still have people every day message us saying that our music is the thing that’s getting them through the struggles that they’re having and the solace of being alone or unable to go through things, unable to work, whatever it is. So for me, I just want to thank everybody who has continued to support us this much and everybody who is thinking of us in this time [as] something that helps them.”

“We see these comments or people writing to us saying that our music helps them,” guitarist Pitts offers. “And it takes me back to when I was growing up thinking about how the bands I grew up listening to helped me through my struggles in life. I can relate back to it. I can imagine that everybody’s got their own experience of what they’re going through. Everybody’s different. But I can sit there and think, ‘Yeah, I can relate to this person because I understand. I went through something similar.’”

New bassist Eagleton is in a significantly unique situation. He was a Black Veil Brides stan for years, going so far as to get a tattoo to proclaim his fandom. As a member of his favorite band, he’s neither assimilating nor boasting. The good-natured bassist might even have multiple bruises from pinching himself to make sure what he’s experiencing is certainly real. He describes his last gig with the band pre-pandemic (in Mexico City) as “the most fun I’ve ever had onstage playing music.

“I think it’s really great to see how the fans continue to support the band for so long,” he says. “And even then, we had to postpone a tour due to the state of the world. Everyone’s really stood by us through the whole thing. To this day, we still receive positive messages and fan art each day. Fans are posting covers of the band’s music on YouTube. It’s cool to see that even though we’re not actively out there touring, fans have still been super-supportive, and that really means the world to us.”

“To be in a position where we can create music and art that helps people is really an indescribable feeling,” Pitts resigns. “It just makes me really excited to be able to create more. And I always thank people for giving us a chance and giving us the opportunity to do what we all love. It’s an amazing feeling.”

That is precisely the grateful humility that more bands should take note of. Please welcome Black Veil Brides to their ninth appearance on the cover of Alternative Press. And keep your eyes peeled on altpress.com. Because really, we’re just getting started on this one…