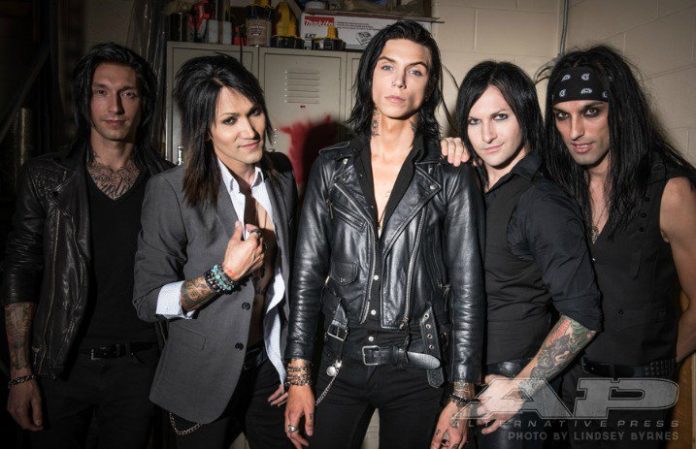 Frontman Andy Biersack is ensconced at producer John Feldmann’s new SoCal studio wrapping up vocal tracks for Black Veil Brides’ as-yet-untitled album. Biersack checked in with Alternative Press, and while he wasn’t forthcoming on specific song titles or release dates (although a late summer/early fall window looks probable), he did own up to doing a whole bunch of mental housecleaning to rejuvenate the process.

You’re at BVB album No. 5. What’s the biggest non-musical influence on the proceedings?
For me, my life is so different from what it was the last time I made a Black Veil Brides record. Making the last BVB record for me, in terms of my own personal life, I kinda went off the rails. There was no stability. It was something that built up over the course of several years. We were touring far more than we were ever home. 2014 was when we put out the last record and we had to be road dogs to keep it going. The record did well and was successful, and working with [producer] Bob Rock was amazing. But for me personally, it didn’t feel like it was much of a record for me, in the way I look at Wretched And Divine and think, “This was a personal journey.” And I think there was a bit of unfairness in Wretched And Divine in terms of a band dynamic, because it was such a personal thing to me. I don’t know that I let everybody in the way you should when you are in a band.

When it came time to make [IV] with Bob, I felt, “Well, I need to just step away and make sure the band feels comfortable.” And in doing so, I felt that I wasn’t all there emotionally. In many ways, I felt like what I was doing was taking elements of what I had done before and was piecing them together. This was also at the end of my train into unhealthiness, where I wasn’t eating well and [was] drinking constantly. I wasn’t doing well mentally and it wasn’t because my life was so difficult. Things I had let sit under the surface had manifested to the point where I couldn’t escape it, and I was trying to run away from the depression. It’s a great record in many places, but I didn’t feel like I was giving it my all. It didn’t feel fair to the band—it didn’t feel fair to anybody. I don’t think we got the same jolt of playing the songs live like we did Wretched And Divine, when it felt like a new experience. Ultimately, it culminated in the end of that touring cycle with me feeling like I needed to make a big change in my life. The biggest change came from me entering into sobriety, getting married and changing my life for the better. I went to vegetarianism and then veganism. I became a different person and closer to the kind of person I aspired to be. It’s not that I’ve suddenly become “a better guy:” I’ve just stopped pretending to be cool and doing stupid shit that I don’t really feel in my heart is me.

The biggest change for this record is that I’m happy and I know what I want to say. I’m feeling good about what I’m doing and… I’m writing good lyrics again! [Laughs.] And I’m excited to do it.

It’s interesting you say that because this is the record that your bandmates—especially guitarists Jake Pitts and Jinxx—were creating while you were doing your Andy Black project. So you’re in a better headspace and your bandmates are contributing to the process in a bigger way.
Jake has really come into his own as a producer and writer over the past couple of years. He’s really gifted and has taken the bull by the horns and started the process of just writing on guitar. So did Jinxx: There was an incredible amount of output coming from the two of them. One of the big things with this record was to try to re-engage him with the string instruments and bring back those elements we were missing from the previous record, which he thought we were missing, too. One of the things that is fun to listen to on Wretched And Divine was we had all those orchestral pieces in and knowing that they weren’t just MIDI keyboards, but played by a member of the band who wrote this music out. It’s a skill we’re remiss to not use. It wasn’t like I was stepping into a record that was already written. It was fun to know that we already knew where we were going and we can build the record the way that we wanted to.

I remember a conversation we once had that was centered around the fact that many of the legendary rock acts from the ’70s that can still fill arenas simply can’t continue. Do you think this record is going to be a sonic statement regarding the soul of this band? Like BVB are ready to fill that gap?
One of the things about being in a band for a long time—making four records and working on a fifth—you really learn what the band is. You start to get into this cycle, and the push came from our interests and then was built up by the label that we were now this “glam band.” That became the second record. For the third record, I decided to take the direction of being overly dramatic and sounding like Meat Loaf. [Laughs.] So that’s the concept record. The fourth record? Okay, now we’re not going to wear so much makeup and do a hard rock record with Bob Rock. So when you get to the fifth record, the question is, what do we have to prove?

Ultimately, it would be very silly for me to come out in the capacity of the guy that says [adopts loud, boorish tone] “This is the greatest fuckin’ thing we’ve ever done! It’s our most melodic and our most heavy,” and all that other shit you hear everybody say. The reality is that I’m better at what I do now than when I was 18. All of us [in the band] are. You’re looking at a group of people who understand this band more than anything else. Emotionally, I think this record will connect all the dots and bring the story full circle. If you listen to all of our records, there is a through line. And it is watching the growth of five people who come from different backgrounds and didn’t have a whole lot in common, barring a shared experience in life. At this point, the level of comfortability in the band is that we know how to finish each other’s sentences, musically. And I think we know where we’re going.

I talked about 2014 and the chaos I was in emotionally and not being myself. I wrote some of the dumbest lyrics I’ve ever written, because—and this has been the case my entire life—I’ve never been able to write about what I’m experiencing.

You’re in a good headspace personally. The kneejerk reaction from critics and some fans is that adopting that mindset would make for really tepid work. I’m not even going to imply that you have nothing to rail about.
Here’s the issue for me: I talked about 2014 and the chaos I was in emotionally and not being myself. I wrote some of the dumbest lyrics I’ve ever written, because—and this has been the case my entire life—I’ve never been able to write about what I’m experiencing. It’s too literal, it’s too on-the-nose. When I was a kid, I tried to write a song about an ex-girlfriend who broke up with me. To this day, I still laugh at how literal the lyrics were, how much “I hate you” and blah blah blah. [Laughs.] Now, I’m someone who obsessed over the weight I put onto myself. I wonder how people do things they say they never regret. When I think about scenarios in my life where I did something or said something wrong, I start to really get upset. And I can only think about those things when I can detach myself from then and they’re not currently happening. So writing about my emotional journey into now—being happy—I can look back at all the stupid things I did over the last 10 years. It’s been a little cathartic to be able to write about saying goodbye to elements of myself that I didn’t want or need.

Anybody who follows me on social media knows I haven’t been very active. That’s because as I write this record and work on these things, I find that the free time I have, I want to spend enjoying the moment with my family. When I’m writing for the record, it’s an emotional experience because I’m talking about things that affect me deeply. During the making of the Andy Black record, I don’t think I was ready to talk about a lot of that stuff.

It sounds quite intriguing. How far along are you?
As of me talking to you right now, we have nine or 10 songs completed that are currently in the mixing process. I don’t think we’ll go too much further; it’s been a process of shedding down to this point. Rather than record 100 songs we didn’t like, we were really able to strip away the stuff that didn’t seem as strong. It feels like the story I want to tell will be done in the 10 or 11 songs in this record. I can’t tell you how great it is seeing how much Jake and Jinxx have grown as players and songwriters. The future is so bright.

The songs tie together for a full story I will eventually talk about, but not right now. I don’t think I’m ready to yet. The only place it exists is in a notebook where I’ve written everything out.

Any titles you want to reveal?
To tell you the truth, there’s certainly a concept to the record but I don’t know that it is a “concept record.” The songs tie together for a full story I will eventually talk about, but not right now. I don’t think I’m ready to yet. The only place it exists is in a notebook where I’ve written everything out. And I sent a text message to Feldy with it. [Laughs.] Until I have it definitively down, it’s not worth sharing yet.

When I was younger—like everybody—you want to build yourself and make something out of yourself. One of the things I became famous for in the scene was my broad proclamations. I’m proud of that in the way that I still believe in this band. I have a framed page from a German magazine hanging in my studio. It’s just a bunch of things I’ve said that are realllly hyperbolic. [Laughs.] While I’m not going to say this record is greater than anything we’ve ever done, it means a lot just to be able to do it. alt