Enema Of The State turns 20 June 1. Some may call it nostalgia, but true music fans know that the breakout blink-182 album is a timeless classic.

Countless awards, iconic tracks and the cultural influence of Enema mark it in history as one of the greatest albums of all time. For the album’s 20th birthday, here are 20 reasons its place at the top will last forever—even after it turns 23.

1. Pushing pop punk into the mainstream 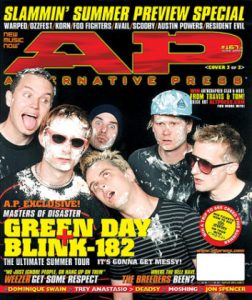 Prior to the release of Enema Of The State, punk was still known as somewhat of a niche genre. On the tail of Green Day’s rise to fame, blink forced punk-inspired music into the mainstream by melding elements of pop, appealing to the general audience.

2. Providing some of the most iconic music videos of all time

Every music video from Enema is pure gold. Whether it’s running around nude for “What’s My Age Again?” or living the pop star life in “All The Small Things,” very few bands let their true colors show like blink.

3. Fooled everyone into thinking they were running around naked in L.A.

Sadly, the iconic “What’s My Age Again” video wasn’t actually a Jackass-worthy stunt. Instead, the band members simply covered their junk and added censorship blurs in post to give the illusion of the trio running around butt-ass naked and wreaking havoc. However, as seen in the video, only the front bits were covered, leaving full moons to shine all over the streets of Los Angeles.

4. Responsible for a timeless Halloween costume 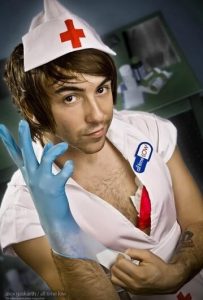 There’s a ton of great band-inspired Halloween costumes out there, but one of the most frequently spotted are recreations of Enema’s nurse cover star. Even though it’s usually a female flaunting the blue rubber glove, we’ve definitely spotted some die-hard dudes rocking the “sexy” nurse look as well. Most notably, All Time Low frontman and Mark Hoppus’ Simple Creatures bandmate Alex Gaskarth rocked the iconic look for “The Band Who Changed My Life” special in AP #252.

5. Introducing the world to Travis Barker

It’s absolutely unthinkable to imagine a blink-182 lineup without the original members (unless it’s Matt Skiba, of course), but the addition of the Aquabats drummer Travis Barker was clearly a match made in heaven. The lineup that made Enema an instant classic quickly jelled as one of the most recognizable groups in music history. In Tom DeLonge’s words, adding the man who learned a 20-song setlist in 45 minutes was “perfect.”

Nobody could have foreseen DeLonge taking a hiatus from music to chase aliens, but the third song from Enema, “Aliens Exist,” was a big hint. This was the first of many extraterrestrial-inspired works from DeLonge, who we all know has continued his search for life beyond Earth and found some success.

Between all the low-brow humor and dirty visuals (see blink-182’s first AP cover, issue 140), blink actually took the time to write a song about suicide, casting a strong light on mental health at a time when the topic wasn’t often addressed. Not only did they include the track “Adam’s Song” in their breakout record, but it was also one of three singles that dropped ahead of the album’s release and remains one of their biggest hits.

8. Pissing off critics and parents alike

As wild as it is to imagine not enjoying a blink record, some critics took offense to the immature humor and overall carefree attitude that the band exuded in Enema. “Wholly toothless and soulless,” the album’s negative reviews encapsulated what made the kids growing up on Enema love it so much; it pissed off a ton of adults, and we enjoyed every second.

One of the best ways to influence a fanbase is to relate to them, and the topics tackled in Enema matched their audience perfectly. Tough breakups, angst, depression and “Going Away To College” are all consistent themes throughout the album, relating to any pissed-off teen blasting the album through their Walkman.

10. Influencing an entire wave of pop punk and punk rock

Whether they like to admit it or not, and they usually do, every band who’s even sniffed at a pop-punk sound have been influenced by blink. Some even go as far as naming their bands after blink tracks (looking at you, Man Overboard). Nonetheless, whether it’s State Champs, Neck Deep, Yellowcard or even the aforementioned All Time Low, many of your favorite pop-punk staples have blink to thank.

11. Having the perfect song for your 23rd birthday

You probably just rolled your eyes, but everyone knows the lyric “nobody likes you when you’re 23.” Even if everyone and their mother make a social media post saying this once they hit their blink-182 year, “What’s My Age Again” lovingly welcomes every person as they approach their mid-20s.

The Handsomes, circa 1999 Time to bring back these shorts.

Against all odds, the band were a crucial player in bringing striped high socks and calf-length shorts to popularity. The trends should probably stay in the ’90s, but we all owned Dickies shorts at some point. It’s just a matter of whether you admit it or not.

13. Making a “specialty actress” into an iconic figure

The guys had a plethora of models to choose from when selecting their Enema nurse, and quite fittingly, they chose an adult film star. While some might know her for her other endeavors, Janine Lindemulder will forever be known as the face of one of the most iconic albums of all time.

14. Responsible for one of the dirtiest songs of all time

While it didn’t make the final cut (and we can understand why), “Family Reunion” was gifted to the world as part of The Mark, Tom, and Travis Show (The Enema Strikes Back!), which was an overflow of extra Enema tracks along with “Man Overboard.”

Here's a great photo of @markhoppus and Jerry Finn, working on recording Enema of the State. Blink pioneered that polished, glossy pop punk sound of the early '00s, but Finn was the man behind the curtain #blink182 #RIPJerryFinn pic.twitter.com/QS2kYq9kEY

While already known as a top-notch producer among the rock community, notably for his contributions to Green Day’s iconic full-length Dookie, Enema could be considered Jerry Finn’s breakthrough. Finn would go on to edit music for top-named punk acts such as the Offspring, Sum 41 and Alkaline Trio, among others.

Almost just as impressive as his resume, Finn threw modern techniques to the side in Enema’s production, editing the sounds with analog technology instead of the dominating digital style. This is nearly unheard of today and was still very out of practice even in 1999.

17. Influenced emo and other genres

The band’s influence reaches much further than just the subgenre of pop punk. Enema was noted as a major influence for some emo genres, penned alongside the Get Up Kids as a precursor to emo-pop. More recently, the band have been noted as an inspiration for rappers as well, most notably Lil Peep.

The stardom blink rocketed to transcended beyond music. The band’s comedic style scored them cameo roles in the first American Pie film, along with “Mutt” as part of the soundtrack. The band have also been frequently transformed into animated characters, appearing on shows such as The Simpsons and South Park.

Overall, the fact that die-hard fans and regular people alike are still spinning Enema is proof of the album’s greatness. You can’t turn on any alternative radio station, walk into a bar or restaurant or even attend a baseball game without hearing classic tracks from the band’s breakout effort.

At the end of the day, we still all giggle at the constant slew of toilet humor. Thank you blink-182 for 20 years of Enema Of The State, and please, never grow up.