Classic screeching violins. Prom murders set to a disco beat. Kickass electro-metal worthy of spins at some industrial-rock bar. No, it’s not a club club night in Cleveland (but dammit, it should be), but a small chunk of some of the sonic and visual delights represented in Blood On Black Wax, a new book that offers horror movie buffs and fringe music fans some new kicks for their eyes and ears.

Aaron Lupton and Jeff Szpirglas—editors at the v. cool horror mag Rue Morgue—merged their obsessions with scary horror flicks, creepy music and fascinating artwork into Blood On Black Wax, a 240-paged tome that works as a three-prong outlet for countercultural aficionados of many types. The way Lupton (RM’s music editor) sees it, the fascination begins with the horror film enthusiasts who, acting on their fandom, embrace all aspects of a particularly beloved film. The second aspect is the soundtrack itself, which offers aural snapshots of particularly harrowing scenes or a recurring theme that announces the treachery embodied by the antihero. Finally, there’s the glorious art of the soundtrack cover, which may borrow heavy from a movie poster or a still from the film, but most likely it’s something equally as crazed and manic as the film it’s meant to promote.

“If you really, really love the art of a horror film, it’s all about taking as much of a deep dive as you possibly can to experience everything you can about it,” Lupton says. “You want to know everything about the director and the story and how an actor got cast [in the film]. Then you dig even deeper, and it’s stuff like, ‘Why did you choose this weird electronic score?’

“[With] real true horror fans, it’s not just about watching the film. ‘Oh, I’m going to watch Re-Animator, and I like that,’” he continues. “It’s always like, ‘OK, I’ve watched Re-Animator. Now I’ve got to get the T-shirt. Now I’ve got to own the film on Blu-ray. I’ve got to get a tattoo of the film on my body.’ So even if Brain Damage isn’t the greatest film in the world and you love it, you probably love the whole aesthetic of it. And the music is part of that. With the book, we were tapping into that huge horror fandom: Talk about the film, talk about the writing and direction of everything, but talk about the music, because it’s so much of what makes [the movie] a piece of art.” 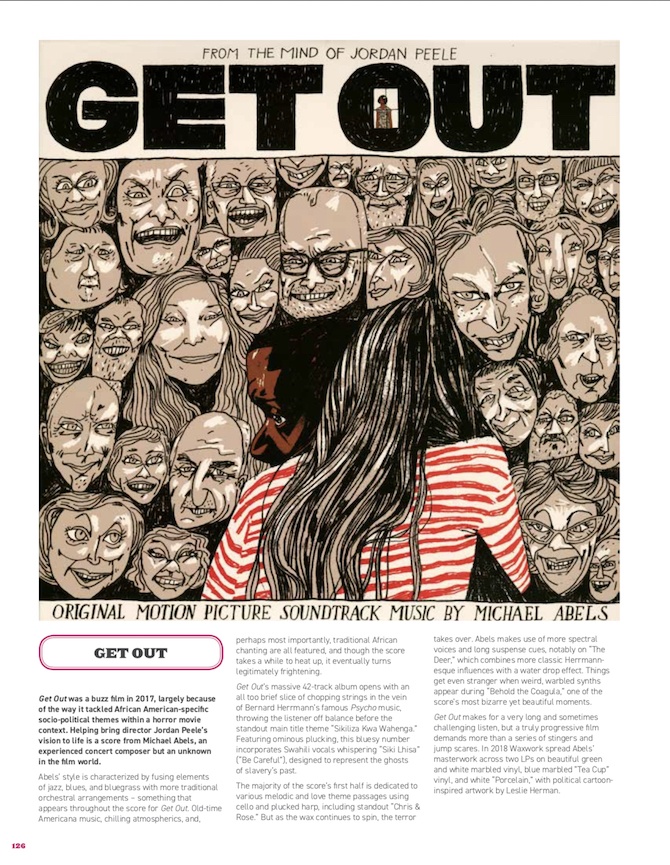 Lupton is quite crystal clear about the nature of both the array of horror films and the fans who stand by them. He readily acknowledges that some low-level productions have a certain amount of cheese, while others have conjured greatness on a shoestring. The bigger picture is the relationship between how the images and the soundtrack work.

“Let’s be honest,” Lupton begins. “If you’re a real cinephile, most horror movies are not good movies. You can like them and enjoy them, but they’re not necessarily works of art. Take all of the horror films that are truly works of art, and you’d have a list of about 50 if you’re lucky. I think that one of the most important aspects to a film score working is that you want people to be leaving the theater humming the music in their head as they walk out. The film impacted you. It resonated with you. The music is all about timing and all of the emotions going on in a film. In a horror film, the emotions are running high. The emotional context of a piece of music can raise a film above the low-budget aspects—like what you watched was epic and so important.” 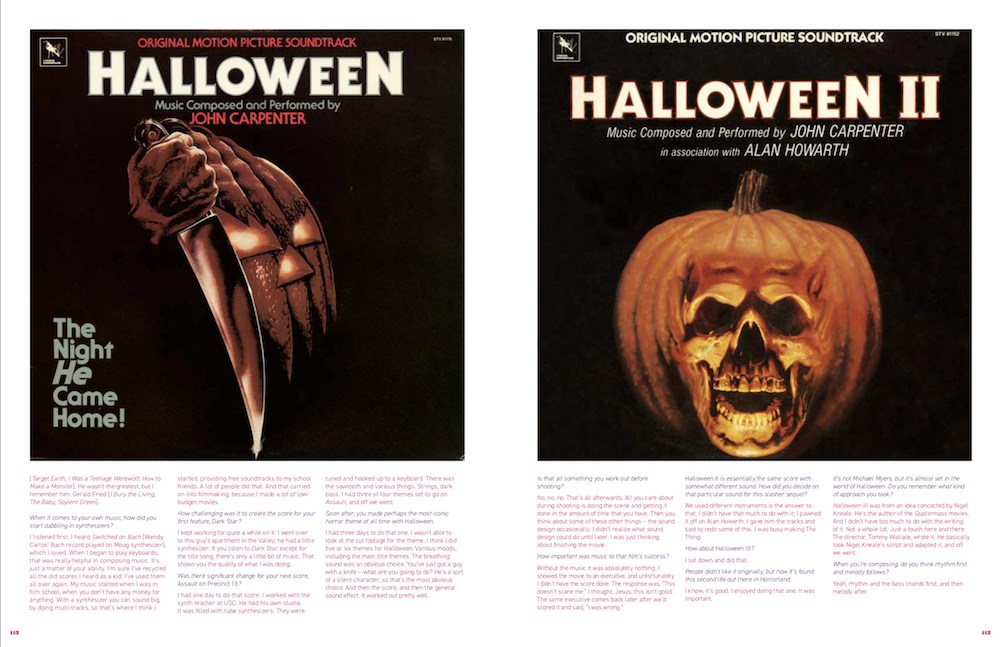 For Blood On Black Wax, Lupton and Szpirglas took extra care in cataloging their obsessions. The text entry on each record adds not only a capsule of the film’s relevance and resonance, but also a review of the music therein; sometimes the music is discussed as fervently as the film it’s supposed to be enhancing. At some crucial junctures, Lupton chatted up musicians responsible for certain scores. There’s a six-page interview with the renowned John Carpenter, the classic horror director who also created fascinating and celebrated soundtracks for many of his productions such as Halloween, Escape From New York and Assault On Precinct 13.

“A movie like John Carpenter’s Halloween—when I was a kid and not really sophisticated enough to tune into the music and how the music was working in a film—that [soundtrack] is so obvious about how music takes you into a film,” he says.

Lupton admits that album cover art has been a personal fascination for years, dating back to when in his teens, he and his friends would ruminate on Iron Maiden record jackets. When he and Szpirglas would get together and “nerd out” over horror movie soundtracks, the latter let slip that he’d like to write a book on the Top 200 horror movie soundtracks of all time. Lupton considered the idea but felt that it needed more development. 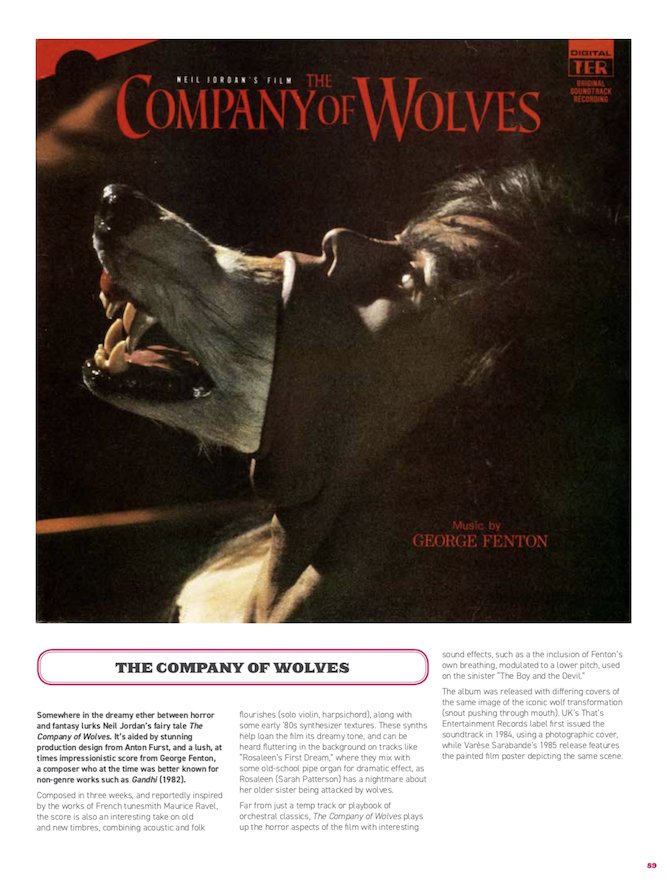 “I thought if we just wrote a bunch of little reviews, it would be something that people would look at, and a few people might read it, but most people probably wouldn’t,” Lupton says. “It’s really difficult to write about horror movie soundtracks and make it accessible. I began to write a proposal to make the book, and I realized that horror soundtracks now have a cool factor.

“What made them cool were these reissue labels like Death Waltz and Waxwork that did colorful reissues but didn’t use the original movie poster art, but instead hired these artists that are getting pretty popular right now, like Gary Pullin, taking the soundtracks and turning them into art pieces. I like to think that along the way, people who bought those records did start to take more of an interest in the music. So we decided to take that same approach and attitude. After Jeff and I talked about it for hours, [we] decided to create a book that would appeal to soundtrack fans, horror art collectors and record collectors.” 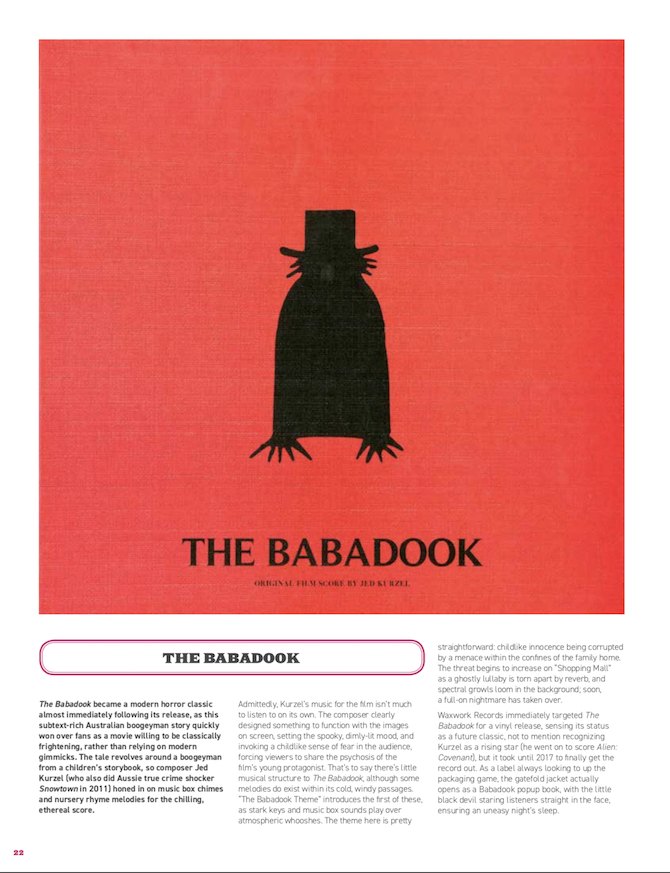 The book is a great read for album-art enthusiasts and voracious horror film fans alike. In many cases, the relationship between the covers makes for some interesting bedfellows. Avant-sax player Colin Stetson’s score for the psychological thriller Hereditary features a well-lit house in the evening but still creates a terse primal atmosphere. The knife-toting freaks on the cover of Wes Craven’s 1972 release Last House On The Left look like a cross between a TV movie and the weirder end of Sub Pop Records’ roster. From Bernard Herrmann’s legendary score for Hitchcock’s Psycho (1960) to the 21st century synth-driven thang of Carpenter Brut, it’s an exhaustive immersion into the movie soundtrack continuum. At the very least, anyone looking for a potential band name can find some gold in here. (Wolfcop, anyone?)

Matthew Chojnacki, the publisher whose company 1984 Publishing signed off on the project, says Black Wax marries his love of film, music and album cover art into one massive (sometimes bloody) whole.

“I collect soundtracks,” he begins. “Not just horror soundtracks but anything that’s got hand-drawn art—which was the whole point of my book Alternative Movie Posters. For me, this new wave of horror soundtracks is just an extension of people who love music and movies so much, they’d want them reinvisioned. To me, it’s a perfect artform: You get a 12×12 piece of art, the music and some fun add-ons. The three-prong effect you’re talking about completely hit home with me.” 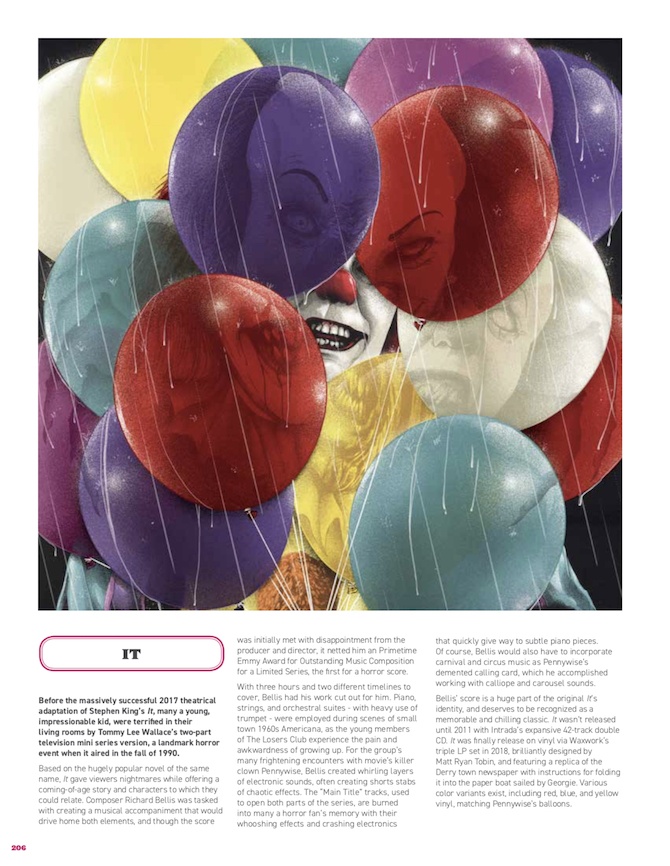 Both the publisher and the co-authors are hoping that the success of this book might branch out into a potential sequel. Or not. Lupton laughs but then adds his own commentary on the situation.

“We could do it,” Lupton opines. “But I think the really, really good stuff is in volume one. Jeff and I have this idea—and Matt is aware of it as well—and while nothing’s official yet, we have started putting some stuff together. All I’ll really say about it is if you think this book is for nerds, part two is the nerdiest book you will ever see in your life.”

Blood On Black Wax is available now, and you can get your copy here. 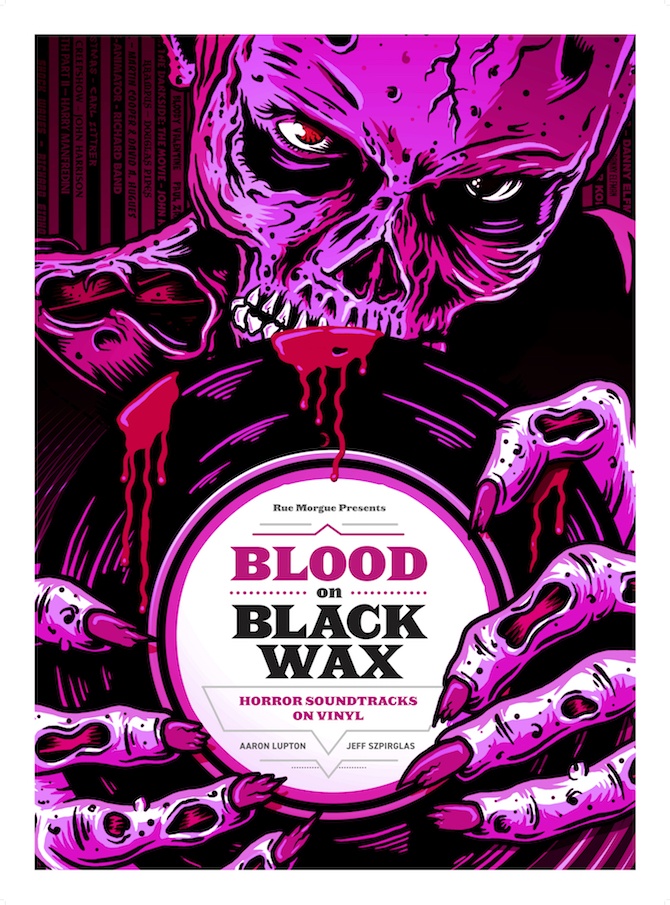