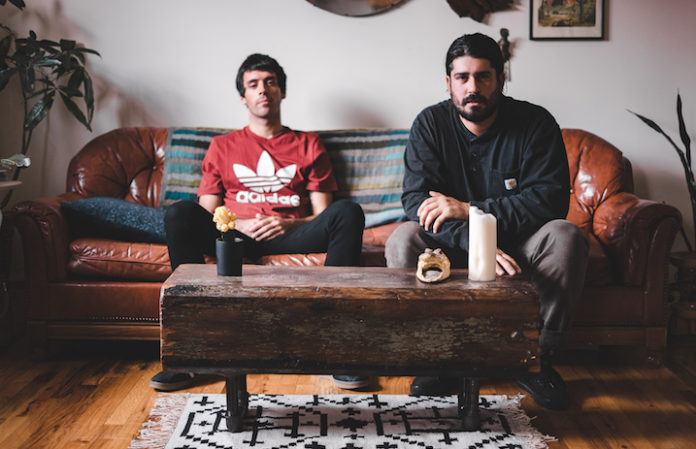 Former Man Overboard guitarist Wayne Wildrick is in no hurry to get his new band Blood Bank out on the road, onto streaming services or immersed into the world of social media. Wildrick and musical foil James Corbi have day jobs they’re quite happy with and aren’t the slightest bit interested in showing people they have something to prove.

“We’ve just been rolling with it and taking it as it comes,” says the guitarist via cellphone after his shift as a barber. “Even when we were like, ‘We have to record this,’ we’d go into the studio and bag it because we just weren’t feeling it [at the time]. We don’t have a gun to our head. If we’re about to go into the studio and we don’t think the songs are good, then fuck it, what are we doing? It’s not like we have a label hounding us. We have our own things going on. James is a chef, I’m doing the barber thing, which has been very relaxing because the two of us are just very laid back about the whole thing — which I haven’t been able to experience in a long, long time.”

Wildrick and Corbi have been friends since high school, while the former was playing in Man Overboard and the latter was fronting Jersey pop-punks I Call Fives. The duo were also responsible for much of Man-O’s visual identity, teaming up for album art and merchandise designs. After years of collaborating, making music together was a no-brainer. “James and I were always on the same page with what we were listening to. We grew up getting into the same bands. We always talked about doing a band, but it was never in the cards. He ended up doing merch for Balance And Composure, so he was on tour just as much as I was. Now it’s like, in the last couple years, when Man Overboard was more or less talking about slowing down, [the band members] were already writing different kinds of music. Originally, I did all the music, programmed the drums, sent it all to James and said, ‘I think your voice would be cool on this, what do you think?’ It was all just MacBook demos back and forth because he was living in Boston and I was living in Brooklyn. Yeah, so it was just a long time coming. The whole thing with us is that we don’t know what this band is going to become. We’re just going to put it out, and if people dig it, cool. If they don’t, oh well. It’s no harm, no foul. But we didn’t want to put all this money out to record a record that might just get shelved.”

If fans of Wildrick and Corbi’s previous bands are expecting the duo to revisit their storied pasts, they should reconsider. Blood Bank are creating a curious synergy of the duo’s personal tastes. An earnest straight-ahead rock track having more in common with Bruce Springsteen or the Gaslight Anthem will have a thrilling textured-guitar atmosphere similar to Wildrick’s British shoegazer faves or straight-up noise rock. Much like hardcore hopefuls Hundredth walking away from that scene’s tropes on their latest album, or the massive about-face Title Fight delivered on 2015’s Hyperview, Blood Bank are all about exploring possibilities within the realms of linear songwriting and post-punk experimentation.

“Here’s the thing with me,” Wildrick begins. “As much as I was the one to come up with Man Overboard’s ‘Defend Pop Punk’ slogan, you know my stance on a lot of that. I don’t think we sounded anything like the Story So Far or New Found Glory. Of course, if you want to put us in a group together, I get it. But to me, I don’t think Man Overboard’s last record sounds anything like that. To me, it’s a mid-tempo, Jawbreaker, alternative-rock record. I think that last record we made was career suicide for us because it was clear, based on what State Champs, the Story So Far, these semi-hardcore pop-punk bands were playing fast and [calling for] circle pits. And we made a record that you really need to sit down and listen to. When we went out on Warped Tour, that was apparent. We couldn’t have people do circle pits to all of our new songs, we couldn’t do all of that stuff. To me, it’s all just melodic music: very soaring, very open.

“To me, these bands that are coming up and changing their sound, like Title Fight, that’s just a natural progression,” he continues. “I think some bands make too much of a stink about it, like, ‘We’re changing our sound.’ I wasn’t around for it, but I don’t think Pink Floyd or any of these other bands announced sonic changes. You just put it out. You can just expect what we do, as far as I’m concerned. Because I can say, ‘I think the new Man Overboard record sounds like this,’ and then I get the review back and it’s like, ‘Blink-182,’ and it’s like, ‘Jesus fucking Christ, man, what records are you listening to?’ I’m interested to see what people think Blood Bank songs sound like because to me, if Zac [Eisenstein, Man Overboard vocalist] were singing over these songs, people would be like, ‘Yeah, it sounds like Blink-182 and Taking Back Sunday,’ but just because it’s a different singer, it would get the same treatment. ‘Oh yeah, Taking Back Sunday, Brand New,’ like the obvious shit. I don’t want to put out too many vibes as well, like ‘for fans of this, that.’ I know to an extent, you have to do that, but I want to see what people take from it. I’m curious to see what people think. I’m very into the pop sensibility.”

Wildrick says Blood Bank are ready to do great things; they’re just not interested in rushing the process. There have been discussions about adding a rhythm section to their Bloody mix; they also have four songs in addition to “Heaven” ready to go, and are soliciting remixes from friends who work in other music genres. Wildrick and Corbi are also thinking way out of the box when it comes to presentation. “Of course, we’re down to play shows,” says the guitarist, “but we have it in our head, like, it would be really cool to make [shows] more like events and bring some other elements together. Get a space or a gallery to have some people hang up some artwork, show some things off, play a set, play with projectors. Bring the art world to the music world and make it a more communal, Andy Warhol-kind of vibe.”

Now more than ever, Blood Bank are trying to create their own art utopia, one that harkens back to an era where you didn’t make music to sell merchandise or a price-tagged “fan experience.” They are beholden to no one but themselves, choosing to embrace finished music as its own reward. And having that situation be the very fuel that keeps them in constant artistic motion. See, “motion” is a metaphor Wildrick is completely comfortable with.

“I want [Blood Bank] to take you somewhere,” he resigns. “When I was demoing these songs, all the tempos I picked were tempos I’d want to walk to. I’d put the demos on my phone and walk to the subway and walk around New York. I want it to feel like you’re in transit: two- or three-minute songs, good tempos, moving around. I want it to be a very New York record, like if you’re listening to Lou Reed, the Ramones, the Strokes—those records were made to walk around a city. That’s something I really wanted people to pick up on, but you’re really only going to get that if you’re walking around a city.” ALT