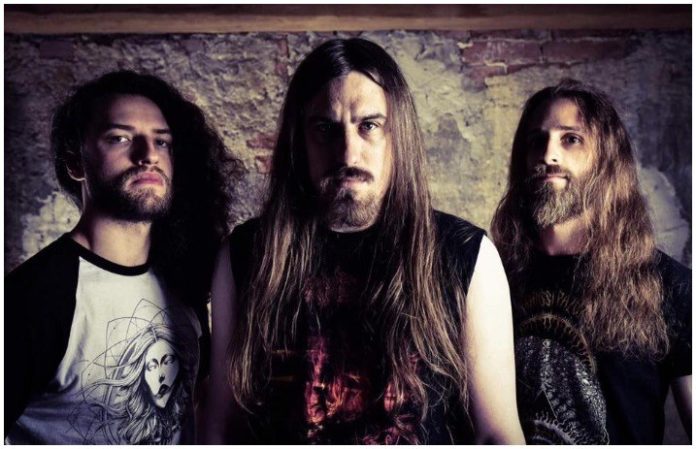 Hailing from the U.K., Bloodshot Dawn have been making a name for themselves in the underground metal circuit for nearly 10 years now. With the upswing in popularity of highly technical, insanely brutal metal over the last few years, Bloodshot Dawn should be a household name by now for metalheads, and it’s criminal that they aren’t.

However, with the release of the band’s third album, Reanimation, they make a strong case to be thrust into the vanguard of modern metal.

Founding member Josh McMorran has remained the constant through Bloodshot Dawn’s career. For Reanimation, McMorran had to build an entirely new lineup from scratch—a tall order when one listens back to 2014’s Demons, an album that gained the band some serious momentum in the metal underground. Luckily, if Reanimation is any indication, the future of Bloodshot Dawn is in good hands. McMorran enlisted the talents of current Vader drummer James Stewart, bassist Giacomo Gastaldi and guitarist Morgan Reid, who co-wrote the album with McMorran.

“We took a good three weeks and put the whole album together,” Reid recounts. Originally from Canada, Reid locked himself in his bedroom for hours at a time, churning out riff after riff. When the time came to actually write the record with McMorran, he’d stockpiled a good three to four albums’ worth of material. While writing a new album with all new members seems a daunting task, McMorran said it was actually easier this time around compared to before.

“It gave me a chance to be really cutthroat with the material, rather than before when we sort of wrote songs separately and presented them to the band,” he says. “Morgan had a whole library of ideas to work with. The songs came together naturally.”

It certainly shows throughout the album. Whether it’s the hyper-speed, million-notes-per-second opener “Seared Earth,” the brutal, bulldozing grooves of “Shackled” or the face-shredding “Battle For The Omniverse” (more on this one later), the songwriting is tighter and more focused than it’s ever been. The riffs are heavier, the choruses more epic, and it’s clear that Bloodshot Dawn are picking up right where they left off.

Handing production duties for the record was Per Nilsson, best known as the mastermind behind melodic death-metal mainstays Scar Symmetry, who now count former Bloodshot Dawn guitarist Ben Ellis among their ranks. McMorran and Reid both cite Nilsson as a huge influence on their own style, and they credit him with taking Reanimation to the next level.

“We’re both fans of his music, of his process, and we got him in because he adds a whole other element to the music,” McMorran say. “You could say he was almost a fifth member of the band.”

While the band were more intentional about making the songs more epic and catchy this time around, Nilsson brought his own ideas as a musician to the table, helping to emphasize what they were already playing.

“He really produced it in that sense—he really came from the musical perspective, which is kind of rare in today’s pre-produced world,” Reid says.

Perhaps the most ambitious cut on the record is “Battle For The Omniverse,” which, in keeping with an apparent tradition started with “The Image Faded” on Demons, features several insane guest spots, including the legendary shreddage of Jeff Loomis and Paul Wardingham. The song was written over the course of a day by McMorran and Reid, and they expressed that it was a songwriting process they’d like to utilize more in the future.

“As fans, we like to have the guys come in and do it. It’s just mind-blowing to hear these guys shred over our stuff,” McMorran says.

Bloodshot Dawn have had a strong DIY mentality since the band’s inception, and that’s been intentional on their part. Getting signed to a label is something every band aspires to, but in the case of the underground metal scene, sometimes it takes time to get there. Fortunately, the band aren’t in any hurry to break out before they’re ready.

“We want to take time to get there,” McMorran says. “We don’t want to be signed up early before we’re ready to have a proper career as a band.” He says a  lot of bands sign too early, which can quickly lead to getting burned, either financially, mentally or both.

For now, Bloodshot Dawn are willing to put in the work, like they’ve always done. They’re currently touring through Europe on their first major tour in over two years, and they’re even hitting Canada for the first time later this year. As for plans to tour the U.S., “That all depends on your president,” McMorran says candidly.

Regardless of whether or not they make it stateside in the near future, expect big things from Bloodshot Dawn. Even though they’ve only just unleashed Reanimation to the masses, they’re already eager for the next chapter,a telltale sign of a young band chomping at the bit to take the world by storm.

“Our plan is to write our new record ASAP, because we’re really pumped to create something from scratch.”