Led Zeppelin, Bob Dylan and John Lennon are just a few names of many that Gruen captured through the lens of his camera.

Each month, Alternative Press Gallery explores the work of photographers, directors and other creatives who help shape the music world from behind the scenes. With each issue, we explore the stories behind the shoots and take deep dives into the most compelling media, asking about the vision as well as the happy accidents that create some of the most powerful moments in music. Along the way, we talk to rising stars as well as legendary artists, all of whom work to construct a visual story of your favorite artists.

This month, we connected with legendary photographer Bob Gruen. Gruen has had a long and impactful career as a photographer, dating back to the 1960s. During his career, he worked with some of the biggest names in music, from the Rolling Stones and Led Zeppelin to Tina Turner and Elton John. He also has been a mainstay in the world of punk, from the 1970s to the present. Gruen was one of the first people to document the early years of punk in clubs such as CBGB and the Mercer Arts Center, photographing bands including New York Dolls, Patti Smith Group, Blondie, Sex Pistols and other pioneers of the form. He continued to follow the course of the genre, becoming one of Green Day’s favorite photographers in the ’90s and 2000s. 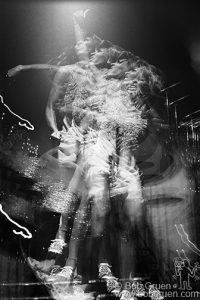 Read more: These 11 punk albums from 2001 brought the genre back into the spotlight

Gruen shared some of his most famous photographs with us, including shots of Debbie Harry, Sid Vicious and Tina Turner. He also regaled us with stories from across his career, many documented in his book Right Place, Right Time: The Life Of A Rock & Roll Photographer (Abrams Press). Gruen spoke of his early discovery of photography, his experience shooting Bob Dylan at the legendary Newport Folk Festival and the chance encounter that connected him with Tina Turner and Elton John. Additionally, he recalled what it was like to be a fly on the wall for the first steps of punk, talking about the journey that led him from the Mercer Arts Center and CBGB to London punk shows and the stadium performances of Green Day.

Your book is this amazing chronicle of so many important musicians. What made you want to write it now?

For many years, people have been saying, “You should write a book.” People are really interested in the ’70s. People are always asking me, “How did you do it?” None of my colleagues had the breadth of starting out with groups like Ike and Tina Turner and LaBelle and continuing going right into Elton John and John Lennon and Led Zeppelin but also coming to KISS and Alice Cooper. I did studio, live, record parties, nightclubs, everywhere. I didn’t visit the music scene as a journalist; I was part of it. I went to CBGB to see friends and take pictures.

One of the major milestones in your career is your connection to punk. You were probably one of the first people to witness the early punk scene in New York and England, and your photos are definitely some of the most important documents of that period. I want to ask about a bunch of artists you were connected to, but the New York Dolls seem like a great starting place.

For me, one thing led to another. I met John [Lennon] and Yoko [Ono] through an interview. They liked my pictures, and I started working with them and just spending a lot of time with them. When I first connected with them, they told me that they would give me total access, but they weren’t going to pay me. I would get paid by magazines and record companies because I had pictures that nobody else had. They were working with Elephant’s Memory, and they did a solo album with John and Yoko, and then I did a lot of pictures for their album cover. I got in touch with their management, who told me I should come down to the Mercer Arts Center to see this other band that they manage, the band called the New York Dolls.

So, I went down there. I thought they were amazingly funny and fun and outrageous. We just clicked. We liked each other. David [Johansen] became one of my best friends. The whole band actually became good friends, Johnny Thunders and Sylvain Sylvain particularly.

The other key plank of that era was the CBGB scene surrounding artists like Blondie, the Ramones, Jayne County, Patti Smith and co. I think in particular of some of your shots of Debbie Harry, which are incredible. How did you make that connection?

We knew Richard Hell from being around and from the Max’s [Kansas City] scene. The first time I went out with David to see Television, I think the Stilettos, Blondie’s group, were opening. I first saw the Stilettos at another club. Lisa Robinson [rock writer] told me this girl is very beautiful, very talented and she’s going to be a big star. I walked in a club, and I saw Debbie, and I said, “Holy Mackrel, this girl is great.”

CBs was a very comfortable place. Hilly Kristal [was] unlike a lot of club owners. He just wanted a bar where he could have a beer and watch television. That way, if he had a nice bar, there would be enough people to pay the rent and make a little money. That’s all he wanted. 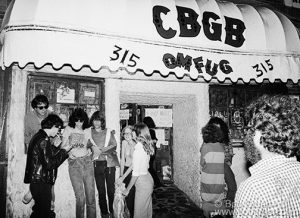 Jayne County actually was one of the first ones to come up and ask to play. It’s funny: This is in a couple of books. Hilly heard the name Jayne County, and it sounded like a country band. Jayne is anything but a country band. Eric Emerson was playing at the same time. In history, you have to say Jayne was the first person to play there, although it wasn’t named CBGB until the spring.

It is true that Tom Verlaine came walking down the street the day that Hilly was putting up the sign CBGB. He said, “Oh, you’ve got a club. You mind if we rehearse here?” Hilly said, “Oh, sure!” Patti Smith started coming in, and more people started coming in, and Blondie got better. Blondie formed the Stilettos. Then [there was] the Ramones. When they started, they were terrible. They’d stop in the middle of the song and yell at each other. But Hilly didn’t care [as long as] people came in to buy enough beers to pay the rent. That’s what he wanted. Unlike other club owners who you would have to send a rehearsal tape. Hilly just had audition nights, and he didn’t care how you sounded. He cared if you brought five-10 people to buy beer. Any band that could bring five friends could play.

There’s a whole controversy about where punk started. Was it CBGB? Was it in New York or London? Who was a real punk? New Yorkers still had long hair. When I got to England, the hairstyles were dramatically different. People paid attention to cutting hair in odd ways and putting safety pins in their cheek or whatever, stupid things like that. They didn’t really call it “glitter” music until about two years after it was over. But at the time, they didn’t say David Bowie was a glitter band. There was no glitter band. Punk wasn’t a word till the magazine [of the same name by Legs McNeil and John Holmstrom].

The last group I wanted to ask about is Green Day. You’ve had a special connection with them for a couple of decades now. Who introduced you to the band?

Jesse Malin, who was the leader of the band called D Generation. I saw Green Day first on TV when they got into a mud fight in ’94 at Woodstock. I thought that was hilarious. I thought, “Wow, what a band.” They really interact with their audience. At one point, Tré [Cool] actually jumped into the mosh pit because they weren’t playing music anymore. I found out later that he got so covered with mud, they wouldn’t let him backstage. He actually broke his arm in the mosh pit, and they wouldn’t let him backstage for a while. 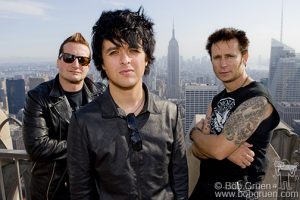 I saw them for the first time, I think, in ’97. They played at Don Hill’s. It was Jesse who said they were going to England to open for D Generation. It was five years later, and my wife and I went to lots of D Generation shows. We were out drinking with [Jesse], and he suggested to my wife that they were going to England. They were doing a tour from Belfast to Prague. He said, “Get on the bus, come on. It won’t cost much. We’ll have fun.” We joined them from London to Paris. We skipped the long part. It was on that trip that I actually met Green Day. I got to know them and their sense of humor. It turned out they were fans of me. They’ve grown up looking at pictures in magazines.

Read more: A beginner’s guide to Green Day: from the big hitters to the deep cuts

I was very impressed with them and how they connected with the audience. Billie [Joe Armstrong] is really out there and really personal and the fact that they reached out into the audience to pull somebody onstage. Can you play guitar? They showed every audience that you could do this. You know, three chords and the guitar and you got a rock ’n’ roller.

I never worked for Green Day. They never actually sent me a check for anything. But I did get a couple of pictures published along the way, although it wasn’t really even about that. For me, it was more just about having fun and staying in practice. As things moved into the 2000s, a lot of people I knew in the record companies were retiring or moving up. The digital world got faster and faster. Also, things got a lot glossier — bands started wanting makeup and photo sessions and elaborate studio work, and I wasn’t doing that. So I thought I’d concentrate more on having exhibitions and books. So I never really worked for Green Day in the sense that I was promoting stuff on a daily basis like with a lot of the other bands I worked with.

Read more: Revisit ‘Nimrod’: the moment Green Day ripped up their own rulebook

Actually, it surprised me a couple of years ago. I realized I had been taking pictures of them for 25 years. The editor I worked with, Ed Abrams, said I could do a book of Green Day. So the book came out two years ago. The band all contributed captions. Billie came up with a graffiti artist to do little cartoons all over the book, which are really cute, really added to the everyday teenage feel of the book.

Billie had agreed to write a forward, but then they were in the studio making an album and really pressed for time. He just kept putting off writing [the] forward. Finally, he just wrote it on yellow paper. It’s two pages, and it came on like the day before the last possible day to get it in the book. We just said, “This is perfect. Let’s just photocopy the thing.” We’re not translating it. We’re not typing it out. I just put a picture of his handwriting in the book, and it really adds a very special personal touch to the book. 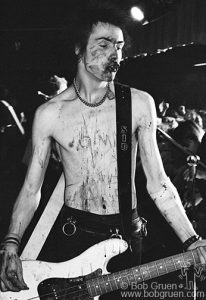 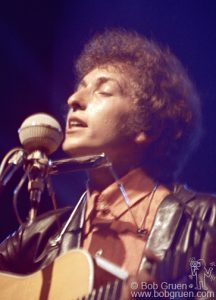