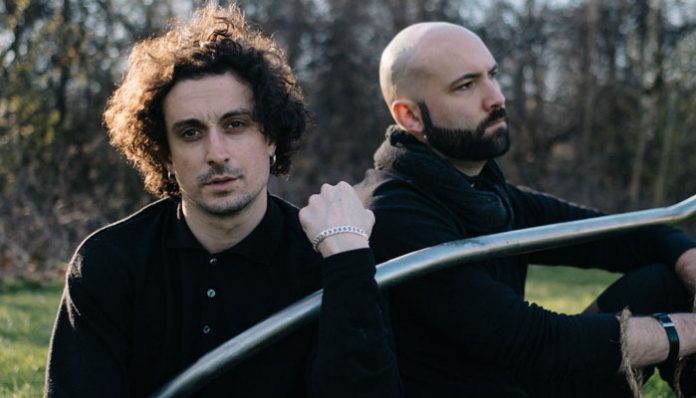 Rapper Samy and vocalist/producer Matt Bones are the duo behind Bonelang, whose smooth grooves and lyrical flow are couched in some modern-pop attitudes. Today Alternative Press is premiering “Newlian,” the first in a trilogy of videos shot for their new album, SAINTMAKER. The Chicago-based pair have no time to pay allegiance to specific genres. And once you get your ears around the stylistic weaving Bonelang pull off, you’ll wonder why more pop artists aren’t as daring.

The longtime friends have made musical pursuits their personal raison d’etre. “Newlian” scratches all of the itches for soulful pop and hip-hop cadences, as well as conveying an emotional shock about a broken relationship. The song comes off more sophisticated than the myriad of “dark pop” offerings that get uploaded to Spotify daily. Couple that with their fierce DIY independent streak and you can’t get much more transparent. The men of Bonelang discussed the song, the resonance behind it and how anybody who plays one genre of music is doing it all wrong.

Read more: Here’s what you can expect to hear on Post Malone’s new album

Bonelang duck and weave their way through hip-hop cadences, smooth, soulful grooves and straight-up pop. How did you arrive at this no/all-genres mindset? Is a Bonelang writing session a thing of unfolding or a different experience altogether? And what kind of music do you prefer to stay very far away from, for whatever reason?

SAMY: We’ve made music together since we were little kids in a number of different genres. We started with punk, then emo, then hardcore, then indie, then hip-hop. There’s no “kind” of music we stay away from in our process. It’s all valuable ammo. Lyrically speaking, I’m just as likely to draw inspiration from a Townes Van Zandt song as I am a Lupe Fiasco tune. I think “unfolding” is a good word for our process. Some songs reveal themselves to us quite quickly, [within] a day or two. Some take years.

MATT BONES: Beyond the background Samy mentioned, we can convincingly do jazz, electronic and classical. I have a master’s in composition, which makes it easy for us to achieve whatever we want, harmonically and melodically. I also have a strong production background, which takes care of the rest as far as borrowing from whatever style.

Picking and choosing which characteristics from different genres you’re going to make available to yourself is seriously limiting. To me, the default mode is being stylistically promiscuous. Anyone who narrows their palette is the one who has some explaining to do. “Genre” is a pretty useless concept. [It’s] becoming more useless by the day.

“Newlian” is the first part of the SAINTMAKER trilogy. Our heroes are in a mountainous region where they chance upon a mysterious woman, another apparition of themselves and a huge grappling hook. Is it surrealism? How do these things factor into the story you want to tell about SAINTMAKER?

SAMY: Surrealism’s a key ingredient for anything Bonelang. In SAINTMAKER’s formative stages, I was writing a lot about rooting out and eliminating my shortcomings. When I had finally managed to scrape away all of my deviance, what would be left would be some kind of “saint.” And then the writing took another turn when I was finding myself making the same mistakes over and over again after having identified the problem. Like telling yourself to take some time away from drinking and then finding yourself at the bottom of a bottle.

Is “Newlian” an obsessive love song? The refrain “Can hear you in the creaking of my bedroom’s door hinges” can reflect either mortally wounded heartbreak or toxic obsession.

SAMY: It’s a heartbreak song. It’s about how when someone leaves our lives, we assign sentimental value to inanimate objects. You put on your jacket: “I remember when she wore this jacket to go to the bodega to buy cigarettes.” You brush your teeth: “I remember the first time she slept over and felt comfortable enough to use my toothbrush.” Pretty soon everything in your life reminds you of that person. For me, it was the most lasting effect of heartbreak. This tune took the longest on SAINTMAKER, about two years.

The beginning of the video leads with images of the big hook, a flower and a cross. What is the significance of these symbols?

BONES: I think we’re both wary to answer that question too specifically. The hook is the most straightforward, and we are pretty open about the bait metaphor, but a lot of the other symbols rely on what you bring to the experience to be interesting. Declaring too specific a meaning from on-high ruins that effect. Religious imagery is inherently powerful that way. Everyone has their own associations that now become mixed in with what we thought we meant at the time. We have our own motivations for using those things, but I don’t think of our interpretation as the canonical interpretation of what those symbols mean in our work. What it says to you is just as valid as what I was trying to say. It’s like a poetic game of telephone.

SAMY: We use sunflowers in everything because I love them.

What message do you hope this trilogy will convey? The idea that artists should just follow their minds’ wildest creations? That the work is often its own reward?

SAMY: I’d tell any young artist trying to make shit happen that the truest reward in this game is the work itself. Process is king. Be present while you create and the work will be forever giving.

For SAINTMAKER as a whole, I wanted to document/photograph/expose my journey to a life free from addiction. I failed. But I did open up my rib cage and show people what’s inside. And for me, that’s one thing that good art does. So in that sense, I succeeded. We succeeded. This album, this trilogy, is an invitation for people to show the world their scars and tell the story of how they got them, free of shame.