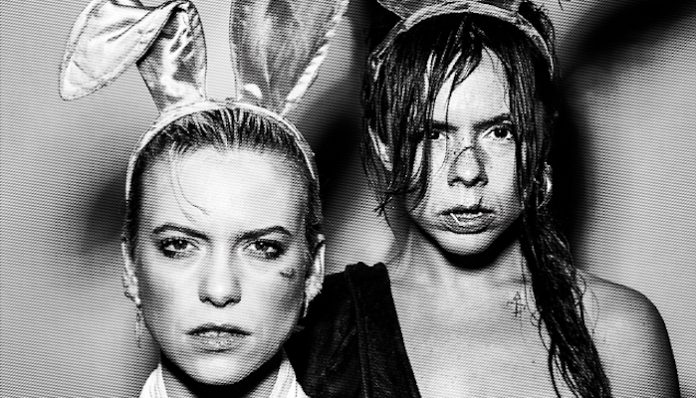 It’s an even-keeled day when AP checks in with Rosie Bones and Carmen Vandenberg, the ass-kicking girls of Bones UK. They are stoked over their recent Grammy nomination in the Best Rock Performance category. But they do notice that we’re speaking on the anniversary of cultural icon David Bowie’s passing.

“David Bowie was a huge inspiration to us,” Bones says, “as he was to most artists. Amazingly creative and one of the best overall showmen, the best ever. He was beyond being a rock star, he was an institution. For us, we’ve not known a world without David Bowie.”

The duo are definitely respectful, but that reverence doesn’t take away from their sleek and savage cover of the late rock icon’s “I’m Afraid Of Americans.” Bones UK—who are headquartered in L.A. via London’s Camden Town—are all about leaving welts in the most physical and psychic ways possible.

“When we do do covers,” Vandenberg adds, “we don’t want to do something that sounds just like [the original]. We want to make it our own.”

Bowie was a fulcrum for ambi-directional changes in rock music, and Bones UK are taking their cues accordingly. On their 2019 self-titled Sumerian Records debut, Bones and Vandenberg tossed more octane booster on their tungsten-hard, dance-rock tracks. Coupled with Bones’ tales of desire (forbidden, other) and declarations of high-decibel feminism, the record was a brash opening salvo in a world seemingly immersed in 47 different varieties of pop music.

And their reward for that? Bones and Vandenberg got their single “Pretty Waste” nominated by the Grammy Foundation. That’s right: The daring duo will be battling it out in the Best Rock Performance category alongside such contenders as Gary Clark Jr., Brittany Howard, Rival Sons and the team of Karen O and Danger Mouse. Bones admits that the nomination is one-part shockingly cool and the other alien AF.

“Sure!” Bones agrees. “We were definitely the underdogs. But we work our faces off. I think it’s great that the Grammys are paying attention to young new bands and not just nominating the same people. We were totally shocked, and we’re quite happy.”

Team Bones are quick to say that while the acknowledgment from the Grammys’ academy of voters is amazing, it’s not going to change what they do artistically. Historically, the show has always been a celebration of who was selling a lot of records. So instead of TV viewers looking at Bones UK and yelling, “Who invited these freaks to the party?” the attitude is more, “Thank God, the freaks have finally arrived.” The nom isn’t a Bones UK commercial as much as it is a lift to new mutant strains of rock.

Bones drawls into a long “Yeaaaaaaaah” before breaking into laughter. “Oh, my God, the [nomination] is so much bigger than just us,” she says. “It’s an acknowledgment to people who think they would never ever get to be anyplace [to be heard]. It would be cool if kids watching the show could see us and think, ‘Maybe my band could make it there someday.’ We could be the face of that, but the concept is much bigger than us.”

On a personal level, Bones says the band have received nothing but good vibes over the nomination. If there was any kind of back-biting, gladitorial, fuck-them-we’re-better rancor from jealous bands, Bones UK haven’t confronted it.

Read more: Poppy co-directs trippy “Anything Like Me” music video off of latest album

“We’ve got nothing but positivity around this nomination,” Bones says excitedly. “And sure, we know there are people who thought, ‘It should have been us.’ We understand that, but we believe that [the nomination] is bigger than just us. It matters that we are in the room, and we’re running up against people with major-label [support] and against people who sell loads of tickets.”

“And there is that sense of camaraderie where everyone supports each other,” Vandenberg offers. “All of our friends in bands support each other. And that was something we’ve definitely felt [since the nomination].”

Get ready to scream and fistpump if Bones UK win: The 62nd Grammy Awards will be televised by CBS on Jan. 26.