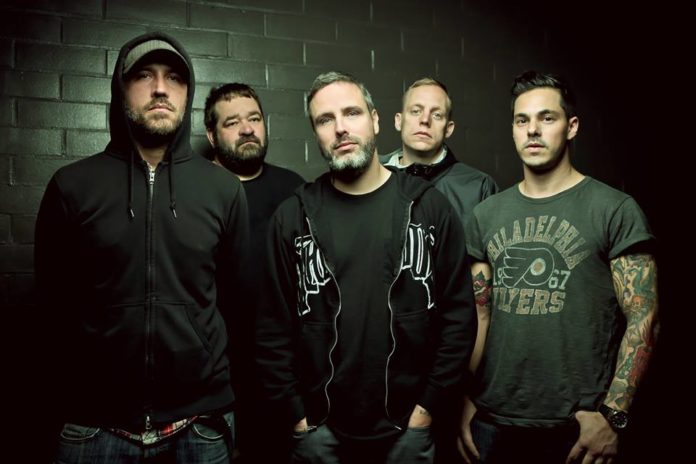 Political punks BoySetsFire have been lighting up the post-hardcore world since their reunion in 2010, but at the moment, they’re reflecting on where they began. The band are reissuing their second and third albums, 2000’s After The Eulogy and 2003’s Tomorrow Come Today, on vinyl for the first time ever via Craft Recordings.

Looking back on the political themes of those records, frontman Nathan Gray says he feels bittersweet about the relevance of those albums today.

“I appreciate the fact that people are able to get in touch with that, although I hate the fact that certain topics are still relevant,” he says. “When you’re speaking out on certain political issues, you hope for them to change. I don’t think you assume that your music alone will do that, but you’re cheering folks on to do something. Usually the part of the musician is to be the cheerleader and hope that in some way you inspire people, and I think along the way, we have. At the same time, the world is what it is, and people are people. [Laughs.] Unfortunately, some of the topics are still relevant.”

When After The Eulogy dropped, Gray says he felt few bands within their local scene were writing about social and political issues, which baffled him. Two decades later, he says he sees modern hardcore bands shifting toward these topics more often, but it still isn’t as prevalent as he hoped. Though he doesn’t blame bands for not diving head-on into this topic in 2019.

“I can’t say that I’ve seen a ton of overtly political bands,” he explains. “Which I find somewhat strange with the political climate right now. I think that’s the issue. Though the problem that we’re facing isn’t just horrendous political issues but also the jaded aspect of it where people are just tired. We’ve got to this point where it’s so disgusting and horrible, and people are not being inspired to do anything about it because they’re exhausted. The current administration we’re going through hasn’t even been through four years yet, and it feels like 10.”

Of course, the world is very different in terms of both politics and music compared to the early 2000s. The changes are now being reflected through these two standout records getting their first-ever vinyl pressings. Where CDs were essentially the only format bands could release albums on back then, they’ve become less common. It only makes sense that BoySetsFire wanted to bring their older music into the modern age.

“[Vinyl] wasn’t really a thing at the time,” Gray says. “It was a little bit, but it wasn’t for the labels especially. It was more of a question of, ‘Why would we do that?’ CDs were the big thing, and that was really all you needed, which is weird to say now. You barely press any CDs now. It’s all vinyl or streaming.”

Where After The Eulogy is often regarded as the band’s breakout record, Tomorrow Come Today marked a massive shift for them, as well. BoySetsFire pushed into a more melodic and accessible sound while signing to Wind-Up Records, an independent label distributed through Sony, which ultimately caused issues when the band and label didn’t see eye to eye. Gray acknowledges the signing  was the wrong move but is happy everyone involved collectively agreed and made the split as easy as possible.

“I feel we made a mistake in doing that, and it was all of our faults,” Gray says. “But we just happened to be pushed in that direction when we had some way more viable options that we should have went with instead. We started getting into it, and to Wind-Up’s credit, they did their best to push in [the] wrong direction, but at the same time, when it came down to it, we said, ‘This is not working.’ They agreed and said, ‘It’s not working. We’ll let you out of the contract.’ They were ‘the man’ but willing to recognize that they had very different goals for us than we had for ourselves.”

The reissues have arrived just as the band mark their 25th anniversary together following a string of shows in the U.S. and Europe. For their 20th anniversary, the band performed After The Eulogy in its entirety, so to avoid rehashing themselves in a live format, they opted for a more well-rounded setlist encapsulating their entire career.

“When you play for 25 years, you start to recognize which songs work and which songs don’t, and then you go into the setlist, and with probably an hour-and-a-half, two hours, you try to squeeze in the main blocks of songs from each album that people want to hear,” he shares. “We try to be as thoughtful in that process as possible, so we’ve already done the playing whole albums thing and wanted it to be very personable to the people wanting to see us. We’re doing a setlist of what we knew people wanted to hear, even if there’s songs that we knew we didn’t care for.”

Heading into 2020, Gray will be championing his upcoming second solo record, Working Title, which arrives Jan. 31 via End Hits Records. While the album title looks like a mistake at first glance, Gray says he purposefully chose it because not only would it force people to take another look, but it also captured many of the feelings he’s had about both music and people.

Read more: Bring Me The Horizon’s early years revisited on the AP podcast

“It brought in a whole world of thoughts of not giving up on people [and] not giving up on those who are still a work in progress,” he says. “It encapsulated so many different serious and wonderful and funny things for me that I knew that was it.”.

With the album reflecting the personal struggles Gray has experienced in life, it takes a more positive stance on mental health and political discussions. Instead of focusing on the doom and gloom of the world, Gray aims to get people to examine the good aspects of life while accepting the bad.

“I hope people realize that life can be overall positive while still containing sad and horrible things,” he resigns. “When I was putting the album together, I almost took some of that stuff out because I wanted a more positive thing. But I thought, ‘That’s not honest. That’s not how life is.’ I really wanted this album to show people that you can be a better person while still having the ugliness and dark times that happen in everyone’s lives.”

After The Eulogy and Tomorrow Come Today are available on vinyl for the first time ever via Craft Recordings here.

25th anniversary vinyl reissues of @boysetsfire302’s 2nd & 3rd albums, After the Eulogy (“My Life in the Knife Trade,” “After the Eulogy,” “Rookie”) & Tomorrow Comes Today (“Foundations to Burn,” “Handful of Redemption,” “Release the Dogs”), are out now: https://t.co/2XloQhwQUy pic.twitter.com/eTOA4kwEgT