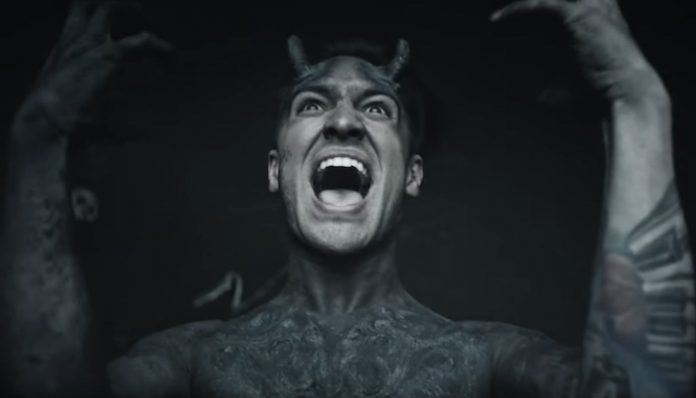 Brendon Urie has had quite the rise as the frontman of Panic! At The Disco. Working his way from the vaudeville alternative of A Fever You Can’t Sweat Out to a now pop-rock sound, the singer can’t be contained. While he may have recently confused both Swifties and the scene with his Taylor Swift collab “ME!,” the musician has also recently reminded fans that his expansive genre-melding doesn’t stop there.

With the very first full Urie metal track airing during a Twitch stream, it had us reliving all the totally metal things the singer has done to date. Check out his 10 best metal moments below.

Before Vine was no longer a thing (R.I.P.), Urie was an absolute staple on the app. The six-second clips offered a look into the frontman’s world from hilarious commentary to daily tour life. However, the best part of Urie’s short-lived Vine presence was #postivehardcorethursday where he growled his way through mini tracks.

2. He has an Every Time I Die tattoo.

Second session with my dude @richiebon on this @everytimeidie piece by @jordanetid Only couple more to go. 🔪💉

It’s no secret that Urie’s favorite band is Every Time I Die, and he’s certainly not trying to hide it. Urie sports a massive ETID-inspired tattoo that covers the entirety of his left bicep. The tattoo was designed by ETID guitarist Jordan Buckley and tattooed on Urie by California tattoo artist Rich Pineda. Talk about dedication.

Read more: Brendon Urie reveals how he prepped for first Panic! At The Disco demo

3. Urie is the goddamn devil in “Emperor’s New Clothes”

All right, so it’s the fall of 2015. *snickers uncontrollably* Brendon enters heaven in the “Emperor’s New Clothes” music video, or so we thought. Basically, the heavenly gates are like, “Yo, Brendon, you don’t belong. GTFO.” And Brendon is all, “WTF, AHHHH!” down into the fiery pits of hell where he then transforms into the goddamn devil. Also, if you didn’t realize we were paying homage to Urie’s Fall Out Boy Drunk History, then educate yourselves.

4. He joined Every Time I Die on “It Remembers”

Urie might be known for his piercing falsetto and catchy choruses with Panic! At The Disco, but that didn’t stop him from lending his vocals (and further proving his fandom) to hardcore-punk collective Every Time I Die for their 2016 release, “It Remembers.” Between Urie’s fierce vocal range and ETID’s Keith Buckley’s biting growl, “It Remembers” became a standout track of Low Teens.

Read more: Panic! At The Disco dethrone themselves atop Hot Rock Songs Chart

5. He could’ve ended up in a hardcore band instead of Panic! At The Disco

Back in 2016, amid all of his Positive Hardcore Thursday notoriety, Urie sat down with AP and recounted his first hardcore gig experience—moshing included. The vocalist described it as “incredible,” explaining his thoughts at the time: “This is the coolest scene I have seen in my life. I want to be a part of this.” And he was, at least for a moment. At 15, Urie pursued the hardcore track with some of his first bands, but they never made it past the practice stage. “I had just found out what hardcore was, and I was all about it… We’d have a hardcore band for a week, and then we’d never meet up again for another band practice,” he recalls. “It was that every week.”

6. The time he did a backflip stage dive.

In 2013, Fall Out Boy embarked on their first post-hiatus run, the Save Rock And Roll tour, with Panic! At The Disco and twenty one pilots as support. Taking advantage of an off day, the band ditched arenas for a grungy club in Milwaukee, in turn giving us one of Urie’s most metal onstage moments. The frontman did his typical “I Write Sins Not Tragedies” drumset backflip at The Rave, but this time he upped the bar by immediately following it with an epic stage dive.

7. One of his favorite Panic! covers is a metal one

There are a lot of Panic! At The Disco covers out there, but Urie has still managed to sift through the talented takes and come up with a few favorites. The vocalist revealed to AP that he caught a cover of “Death Of The Bachelor” the day after the band released it. While he was impressed with her quick turnaround, he also pointed to a heavier version by Hearing Shapes.

8. When he brought “Positive Hardcore” to the stage

Positive Hardcore Thursday may have felt like it was Vine’s little secret, but the frontman has let his live shows in on it a handful of times over the past several years. Tracing back to at least 2013, Urie plays through a guttural 30-second track as the show approaches its end. While its appearance became rarer as the years passed, Panic! did revive it most recently during their first Pray For The Wicked-era secret show in Cleveland.

Read more: 15 best Beebo moments with Panic! At The Disco and more

9. “The Calendar” gets a metal update

Back in December, Urie teased that he made a metal version of Vices & Virtues track “The Calendar” while discussing a desire to do a metal project some day. At the time, Urie pondered putting the 90-second track on SoundCloud. Instead, he took to Twitch a few days later to play the track during the stream and reveal it was written in 2010. Urie revived the track again during a Fourth Of July Twitch stream in honor of a throwback Positive Hardcore Thursday (as seen above).

10. Brendon made a metal track while he was stoned and drunk

Finally, Urie shared his first original metal track earlier this month. In late July, the vocalist teased a brief portion of it. When questioned if he was breaking his time away from work rule, he explained he did it in a “stoned and drunk” relaxation period. The following day, he shared the breakdown-filled full song.