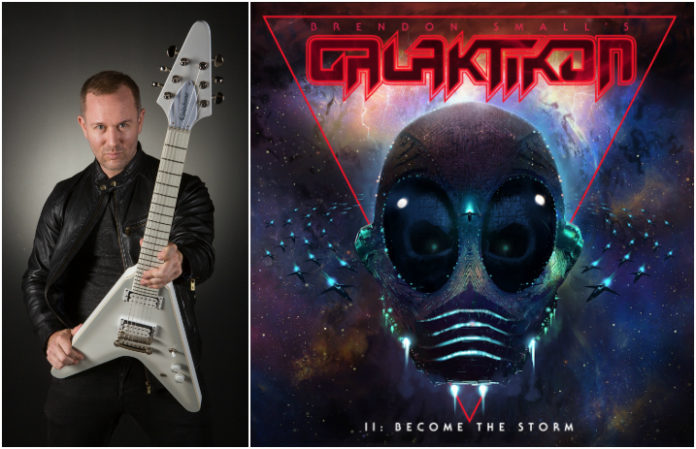 Brendon Small, the brain behind virtual death-metal act Dethklok is back with a new story to tell. Brendon Small's Galaktikon II: Become The Storm, the new album from the musician, writer and producer, is due out on Aug. 25 from Megaforce Records. Check out an exclusive preview of the new album below.

Galaktikon II is the follow-up to Small’s 2012 Galaktikon solo debut and further infuses the musician’s melodic death metal with an otherworldly, interplanetary theme. The music is an evolution of Small’s Dethklok work, taking core elements from his previous records such as The Dethalbum and The Doomstar Requiem and adding a progressive layer of harmonic craft to the proceedings. AP spoke to Small about the new album and some of his influences in making Galaktikon II.

It’s been 10 years since Dethklok’s The Dethalbum, and you’re continuing your musical journey on Galaktikon II. Does this new record epitomize what you wanted to accomplish in music at this point?
I think it kind of puts together the things I’ve been doing, from the first Galaktikon record to all of my Dethklok work, which will probably live inside of my veins for a long time. It’s like a culmination of my music over the last 10 years. There’s rock opera moments inside of this thing, there’s storytelling moments, there are very heavy, brutal moments. But ultimately, I’m just trying to make a record that’s worth listening to.

Your first Galaktikon record presented a very specific theme, a sort of space opera/superhero story, and the narrative was publicly laid out when the album was released. For Galaktikon II, I haven’t seen any lyrics or synopsis for the plot therein. Are we still following the lead character, Triton, from the first album, or is this a new story arc?
It’s a whole new world, that’s what this is. Triton is a character that’s going to pop up here and there, but it’s not his story. This is a story about another planet, basically.

The first time I did a Galaktikon record, I blabbed the whole story to everyone, and I kind of regret doing that. I think one of the coolest things about music is not knowing [the whole story] and trying to figure it out for yourself. People don’t have to give a shit about the story if they don’t want to, but if they want to, I’d rather not tell them what it is. I’d like to leave it open. Those who are interested, I’d rather hear their take on the story, rather than me just forcing it down your throat and removing the mystery.

I can understand wanting to keep it a bit more mysterious. Are there lyrics in the album?
The answer is no, there are no lyrics. If you can figure them out, I want to hear what your take is. You don’t have to give everything away, and you can maybe even hopefully build a little bit of intrigue. I remember being a kid and having records at a friend’s house and combing through the record and looking for clues. I remember doing it with a Queen record. I even remember doing it with Kilroy Was Here, that Styx album where they were all dressed up like robots.

What Queen record was it?
It was A Night At The Opera. My parents luckily had that sitting around, and it changed my life. Listening to “The Prophet’s Song,” for me, was like the most powerful music ever. Ultimately, I’m trying to rip that off. That’s where [Galaktikon II’s] “The Ocean Galaktik” comes from, taking cues from those kind of mid-tempo ballads that are heavy as hell, like “The Sign Of The Southern Cross” by Dio and [Black] Sabbath or even “For Those About To Rock (We Salute You)” by AC/DC.

There’s something to be said about those songs, and I don’t hear it often enough. I’ve been throwing them into my world from the very first record, trying to have these larger-than-life, epic moments. On The Dethalbum, I did a song called “Go Into The Water,” which was me trying to play in that world, trying to have a song that’s bigger than the sum of its parts.

Speaking of “The Ocean Galaktik,” that’s probably my favorite song on Galaktikon II. Hearing you tie it to Queen’s “The Prophet’s Song,” might be why I picked up on it as a real highlight on your new album.
If you haven’t heard “The Prophet’s Song,” anyone reading this, it’s just one of the coolest, most powerful songs. It’s about the coolest stuff: It’s about the end of the world, and it’s about trying to save all the people that still exist. Basically the whole reason Galaktikon exists is because of Queen and that song.

That’s awesome. So, you’re pretty much an entertainment renaissance man. Many fans know you from creating Metalocalypse or even Home Movies, and you also do stand-up comedy in addition to your various musical projects. It seemed like the first Galaktikton record maybe had comedic elements to it, but I don’t sense much of that in Galaktikon II. Am I overlooking that?
No, the way that I saw this story unfolding, it’s about just the absolute darkest place that a mind can go, with terrible people manipulating others into doing terrible things. And there are some songs from a very, very bad point of view. Like, the song “My Name Is Murder” is about a person doing terrible, terrible things.

But inside of that, there’s a lot of optimism. Even “The Ocean Galaktik” is an optimistic song. And I leave the album in what I think is a very optimistic place. There’s darkness and then there’s optimism. I don’t know, living in America this past year, it’s been a lot of highs and lows. There’s been a lot of strange shit. Whether I want it to or not, I think that stuff creeps into the record. Even if you’re not political or whatever, I think everyone right now is kind of asking the gods, “What the fuck?”

So, all that stuff is in there. This one’s not necessarily comedy. I think there’s fun in it and I think there’s levity in it, but I don’t think this is a comedic story.

Going back to the new record, it’s pretty cool that you’ve been making your albums with the same group of people for about 10 years: bassist Bryan Beller, drummer Gene Hoglan and co-producer Ulrich Wild. That must be a pretty good feeling.
This is a relationship that I kind of lucked into 10 years ago. I like how I work with these guys. When I have a project, and it may be getting a little bit too big, it helps when someone will ask a very good, calming question. I love when people do this, and I think Gene asked one at the end of “The Ocean Galaktik.” We have this big, huge outro part with the band, but it was slathered with so much more stuff. It was just me going crazy, like, how many things can I do at once? How can I keep people invested in this song?

And Gene just said, like, “Hey, would it be worthwhile building to that moment?” And I completely understood what he was talking about. I knew I was looking for a way to just kick the song over the top with one little extra move. Him just saying that was really, really important. It helped that song get somewhere, it just kind of kicked my ass. Like, “Right, let’s just cut everything down to the band and build up to that moment.” Going into the mixing, it was very helpful, and it made that song, I think, maybe my favorite song on the record. ALT

Listen to the opening of “To Kill A God”:

The aforementioned “The Ocean Galaktik” is just one of the 11 conceptual juggernauts included on Brendon Small's Galaktikon II: Become The Storm, out August 25. The new record, Small's continuing intergalactic saga of extreme rock and metal, is sure to please fans of both his Dethklok work and the 2012 Galaktikon debut. Pre-order Galaktikon II on Amazon here and iTunes here.

The space-themed story of the first Galaktikon album will also be brought to life in a six-issue series of comic books from Albatross Funnybooks called GALAKTIKON!, created by Small with writer Eric Powell and artist Steve Mannion. Due this August, you can get more info on the comic books here. Additionally, Small will host Brendon Small’s Galaktikon Guitar Camp from July 31 to August 4 at The Paul Green Rock Academy in Saugerties, New York—check here for daily times and pricing.