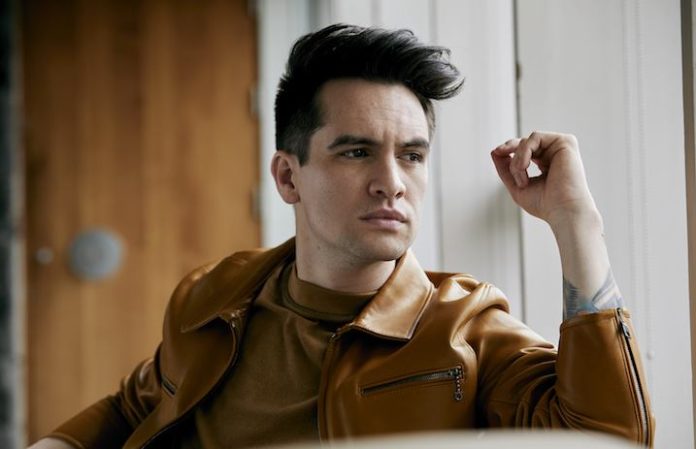 Perfectly timed after bursting the walls of Cleveland’s very own Grog Shop this week, Panic! At The Disco return with “Say Amen (Saturday Night),” the first new music from Brendon Urie and co. since the January 2016 release of Death Of A Bachelor.

Here Urie cultivates his yin and yang, professing a need for both redemption and party-hearty excess; think of it as a groovy-as-hell club banger played through the PA at a revival church. It is the first track from the sixth Panic! LP, Pray For The Wicked, slated for release June 22 (you can preorder it here).

READ MORE: Here’s the track listing for Panic! At The Disco’s new album Pray For The Wicked

When told that nothing quite screams “bottle service” like the new track, Urie roars with laughter. But what’s even funnier is that the Panic! CEO has claimed on many occasions he prefers to sit at home with his wife and pets in front of Netflix, yet he has the innate ability to capture the soundtrack to club night hedonism. “I’ve been a bar-hopper,” he readily admits to AP. “But I’m a homebody, mostly. But I really just wanted to write a club song.” When asked what his favorite club track of late is, he immediately responded with Drake’s “God’s Plan.” (“That video is so good!”)

When asked if the character in the song was looking for redemption or riding in the dining car of a hellbound train, Urie says he’s trying to reconcile his career as well as the vestiges of his Mormon upbringing. “There may be a sad underlying message, but for the most part, I’m just really taking back my tradition—I’m doing my job,” he says. “I’m not really religious at all. I mean, you could argue that I am. I don’t know: It’s something about the way I was raised that I can’t knock all of those traditions that I feel so positive about. On this one, I compare myself to the wicked, but do I consider myself wicked, as well? There’s a dichotomy there, for sure.

“All of these songs [on the new album] are very personal,” he continues. “They’re about things I’ve been pondering for quite a while, maybe I’ve held onto inside for too long. But I’d like to get it out.”

Panic! fans will recognize singer Lolo’s contributions to the new album, and there are some new associates coming on board, as well. Suzy Shinn, a friend of Urie and producer Jake Sinclair, has worked with Katy Perry and Carly Rae Jepsen among many others. She’s the sampled female voice on “Say Amen.”

Urie enlisted mega-talented bassist and vocalist Nicole Row to replace Dallon Weekes when Panic! hits the road in mid-summer. “I like to surround myself with people who create a vibe,” he says. “I’ve done some co-writes with people in the past just so I could stretch that muscle. It was fine; I’m glad I did it. But if I’m not relaxed enough to get into a creative space with people I’m not familiar with, then I’d probably get so frustrated with the song that I wouldn’t want to finish it. They help me push things along. With all my friends, we are brutally honest with each other. No holds barred, no diplomacy. My big rule for songwriting is the person with the best idea wins. As long as it’s an idea I feel so in touch with, that’s all that matters.”

Ideas are great, but having the voice to convey them is paramount. After hearing him hit those high notes near the track’s end, AP posits that the reason people never see Urie and Mariah Carey in the same room at the same time is because they are the same person. Urie laughs at the absurdity, saying, “I appreciate that! If I could do that, I’d be set! Mariah Carey’s got that whistle tone; she’s octaves above [me.] That note is crazy: We were recording it and Jake said to me, ‘Do an ad lib track.’ That was the first thing I did. I don’t know why I do that to myself. I was like, ‘Goddammit. Now I gotta keep it, ‘cause I like it.’ And now I have to do that nightly on tour!”

A few weeks ago, Urie was in his studio teasing fans on Instagram playing back those high notes with the warning that he’s going to get in trouble revealing them. When asked if there were actually repercussions, Urie replies with his it’s-all-good bravado. “Naaaah. I got a call the next morning that was something like [imitates industry-type afraid of coming off as heavy], ‘Soooo…hey, how’s it going? [Laughs.] So you did this thing… annnnnd…it’s totally fine, we don’t want you to think we’re coming down on you…but maybeeee a little more…mystique?’ I hate being told what to do, you know that,” he concludes, laughing. “It was just like a parent: ‘We’re not mad. We’re just disappointed…’

If “Say Amen” is any indication, there’s not going to be a damn thing disappointing about Pray For The Wicked. Urie isn’t ready to reveal a lot of specifics about the album, but he does admit to having moments where he feels like he gets in too deep, like on a ballad off the new album that he says was rough going at first and seemingly too difficult to pull off. (Don’t worry fans, it made it on there.) And that’s the irony: Urie is gregarious and always ready to share a laugh and a joke, but he’s also capable of melting your heart into a pile of quicksilver with tracks such as “The End Of All Things” and “Impossible Year.” There is a curiosity as to whether he’s micromanaging the creation of atmospheres or if he’s working out some things in his head. It’s almost as if he figured how to get paid for his therapy via his art.

“I think both of those things are valid,” he says, shifting his tone. “I like it to be honest. I do think I need that catharsis. It’s something that is true to me: There are so many moments where it’s like, ‘If I don’t cry on this song, then it doesn’t go on the album.’ If I feel something that visceral, I can’t let that go.

“If I’m being completely honest and forthright, I’m only as good as the people I am surrounded by,” he continues. “The people I surround myself with are the ones who bring me up. They impart to me that ‘you can fail and fuck up over and over again. We’ll be here to catch you, show you what you did wrong and teach you how to do it right. Let’s do this together.’ And I’m doing that for them, as well.”